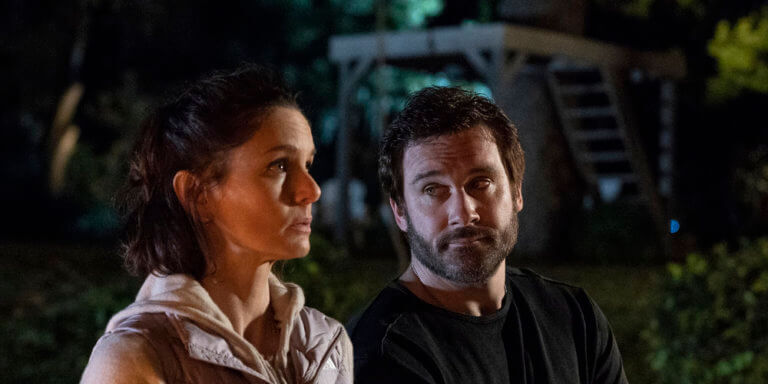 ‘Council of Dads’ is garnering appreciation from all sides for breaking stereotypes, and the latest episode proves that it’s in no mood to stop taking the road less traveled. In episode 4, titled ‘The Sixth Stage,’ Robin expresses her desire to have an intimate connection with someone again. She bags the support of the grown-ups, and Oliver even directs her to a find-a-match website. She chooses a friend from work, Henry, and they end up kissing. However, Theo catches them in the act and lashes out at Robin, who tells him that he will have to accept that as she might start dating again.

Larry tells JJ about his alcoholic past when Lauren doesn’t invite JJ to her daughter Ivy’s birthday party because of JJ’s connection to Larry. Luly and Anthony buy a house at a blind auction sale only to realize it is dilapidated beyond repair. A worried Luly asks Anthony whether they’re disappointed in her, but Anthony advises her to prove them all wrong. Peter confesses to feeling lonely and kissing his friend Eric while Oliver was away looking after the Perrys. Theo receives “the talk” from his pseudo-dads. Anthony and Margot bond over a glass of wine. In case you are wondering about what goes down in the upcoming episode, i.e., ‘Council of Dads’ episode 5? Well, we are here to help you with that.

Unfortunately, fans will have to wait for two weeks for another episode of their favorite show. Instead of next week, ‘Council of Dads’ episode 5 will release on May 28, 2020, at 8 pm ET, on NBC.

Where to Watch Council of Dads Episode 5 Online?

You can watch the ‘Council of Dads’ episode 5 by tuning to NBC at the above-mentioned time. You can also catch the show on NBC’s official website and the NBC app. If you don’t have a cable subscription, you can watch the show on Hulu, DirecTV, and Fubo TV. ‘Council of Dads’ is also available as a VOD service on YouTube TV. You can also stream the episodes on Sling TV.

The upcoming episode is titled “Tradition!”

In the episode, we can expect Robin to explore her connection with the man she met while jogging the other day, Sam. Yes, the same man who ties her laces in the previous episode. I mean, who can forget that ear to ear smile. So, does that mean Henry is canceled? Well, he is moving to Miami anyway. Also, it was just a kiss, right? Right? Sam might smooth talk his way into asking Robin out on a date. On a cold night, the two might dance to slow music and enjoy a bottle of champagne. Of course, there will be a kiss. Sam definitely looks like the guy Robin can fall for. I wonder what her kids and her new friends will have to say about it!

Other than that, the episode can showcase Robin striving to perfect the fall holidays, which might lead her to reminisce how well Scott use to handle everything. Meanwhile, Peter’s tryst with Eric might be the cause of mounting tension in the life of the couple, as Oliver might feel cheated on. Theo, on the other hand, might befriend some kids only to realize they’re not a good influence on him. Luly might unravel some truth about her adoptive family. Becky Ann Baker will guest star as Robin’s mother. Check out the promo below!