Only a few anime shows can be considered for the title of “true classics” and not only are these anime known for their animation, style and plot; but they are also known for their depth, characters, and even influential soundtracks. ‘Cowboy Bebop‘ is one of those few anime series that have left their mark in this world and can never be forgotten. It is unbelievably groundbreaking and changed the entire anime world forever. It’s one of those anime you can’t even think of criticizing because if you do, all the rabid fans that literally worship it will come by and defend it to death; I won’t deny, I am one of those rabid fans.

The best of Sunrise Studio’s anime shows have got a common theme, which is, an influence of the west and a format that consists of standalone episodes that somehow contribute towards an overarching plot through the characters. As a viewer, you can jump in any time you want to and enjoy any random episode of the anime but for the better viewing experience, one should stick to the chronological order because that’s where the actual character development kicks in. The best thing about Sunrise Studio’s anime shows is that their action scenes have a very natural free flow to them. The characters seem very raw and it feels like they are not bound to any particular stereotype or culture. And whether you notice it or not, even music plays a crucial role in making or breaking an anime series; that’s where anime shows like these outshine all others.

Since it came out in the late 90s, most people might assume that the animation of ‘Cowboy Bebop’ is subpar. But only after you watch it, you realize that it completely suits the classy setup of the show. From the smoke drifting out of a blazing cigarette to the cocking of bullets out of a gun, all of it has its own unique rugged feeling to it. Apart from every other general aspect of the show, surprisingly, even the English Dub is one of the best you’ll ever see. I am personally against English Dubbed anime series because of my past experiences with anime like ‘One Piece’. But a few exceptions like ‘Black Lagoon‘ and ‘Cowboy Bebop’ just help you retain all your hope in the dubs.

A lot of the times, people recommend ‘Cowboy Bebop’ as a good starting anime for someone who is new to the whole idea. Though I understand the sentiments behind this, I feel this downgrades the reputation of it and even sends out the wrong idea. ‘Cowboy Bebop’ is not merely a beginner’s introduction to the world of anime but is actually the pinnacle in visual entertainment because of its unique ways of stripping off the common notions that cover most other anime shows and brings in something that is much deeper than anything one may have ever seen before. Beginner or not, if you have not seen ‘Cowboy Bebop’ yet, you’re certainly missing out on something big.

Cowboy Bebop Season 2 Release Date: When Will it Premiere?

‘Cowboy Bebop’ season 1 released way back on April 3, 1998 and lasted till April 24, 1999 with a total of 26 episodes. Thankfully, we live in an online streaming world now where we can actually binge on a show like this instead of waiting for an entire year for the whole story to unfold.

It has been more than 20 years since we’ve been singing the folk blues for ‘Cowboy Bebop’ and yet, there have been no traces of a season 2 till today. One big reason why it ended after the first season is that, unlike most other anime that rely on volume, Bebop relies more on its compact nature and availability. At this point ‘Cowboy Bebop’ season 2 release date of 2021 or 2022 seems like a distant dream.

Most popular anime shows in the west are the long-running ones, which include ‘Pokemon‘, ‘Dragon Ball Z’ and even ‘Naruto’. But ‘Cowboy Bebop’ tends to have a very small run with only 26 episodes, which allow even the newbies who don’t have much knowledge about anime to enjoy what it tries to portray. This is the reason why even some famous names in the west including Quentin Tarantino and Robin Williams are also the fans of the series.

Now the good and bad news is that Netflix is coming with a live-action adaptation of the anime. That’s good news because after all these years, we will finally get to see more of our favorite anime series. The bad news here is that it’s a Netflix’s adaptation and though the cast of the anime seems quite pleasing, we can’t really be too sure about the outcome of this, considering Netflix’s previous anime adaptations haven’t been good. Let’s just keep our fingers crossed and hope for the best.

‘Cowboy Bebop’ centers around Spike Spiegel, who has a strong resemblance with Mugen from ‘Samurai Champloo’ with respect to both his looks and his carefree personality. Spike is accompanied by Jet Black and together they spend their time aiding the Inter Solar System Police in chasing criminals all across the galaxy. But they don’t do it because they are high on justice or anything; they simply do it for all the money that is involved in the business.

Set in the year 2071 where humans have colonized other planets and moons, ‘Cowboy Bebop’ takes you on an action-filled intergalactic journey of bounty hunting Cowboys aboard their space ship that is named “Bebop”. Along the way, Jet Black and Spike meet other new characters who join them on their journey. These characters include a highly intelligent Welsh Corgi named Ein, a seductress who is known for her tricking abilities named Faye Valentine, and a computer genius known by the name of Edward Wong. As they go on their exciting adventures for winning bounty awards, a back story of each character’s past is very subtly revealed.

Spike is a tall and lean 27-year-old bounty hunter who sports an afro of dark green hair. His style of fighting is inspired by Bruce Lee’s Jeet Kune Do and even preaches about Lee’s “Be like water, my friend” analogy. He is usually seen dressed up rather sharply but has a slightly messed up look. Spike’s messy hair and his rebellious demeanor have a strong resemblance to American singer-songwriter Bob Dylan. He spends most of his time just cruising around in his Bebop, watching TV, sleeping and lazying around all the time. He even walks around sulkily with shoulders hunched over and almost nothing excites him. He even despises relationships but with time, he gets close to others who are on board. Also, he is a chain smoker and can be seen with a cigarette, lazily resting down his lips, at all times. 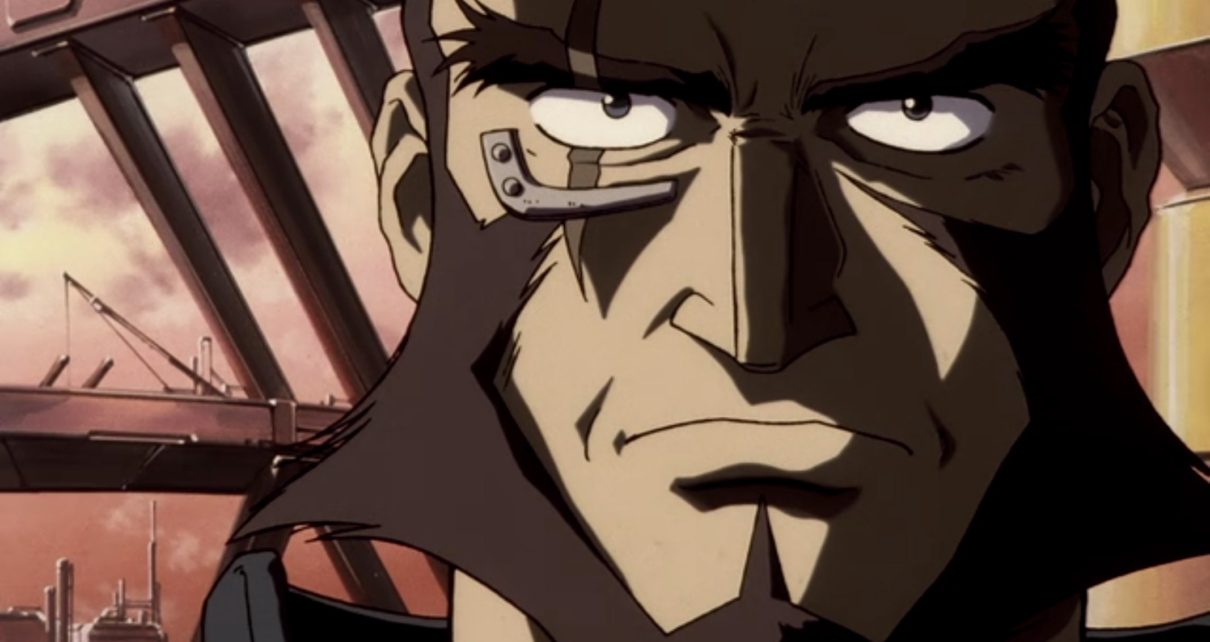 Jet Black was once an officer of the Inter-Solar System Police and was known as the “Black Dog” because of his dedicated criminal chasing skills. In the present events of the show, he is a bounty hunter who accompanies Spike in the Bebop. He is heavily muscular and broad and sports a metallic arm that has substantially increased his strength. The top of his head shows signs of balding and only the sides have his remaining hair that goes all the way down to his chin, forming a beard. Personality wise, he is a mature character who shows a lot more commitment to his work than Spike, but he still remains patient with him and often gives him good advice. Because of his maturity and experience, everyone in the crew looks up to him. 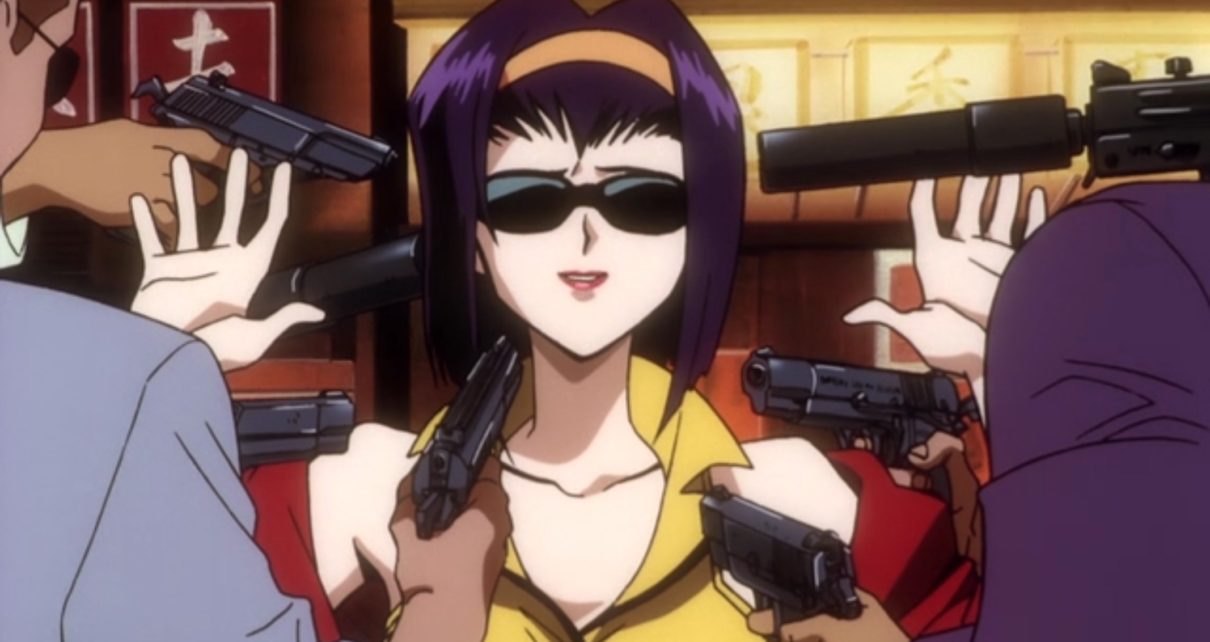 In spite of being your typical anime girl character with a long voluptuous body, Faye often comes off as really smart and some of her philosophical quotes in the anime are quite memorable. Initially, Faye shows an extremely self-destructive behavior that includes alcohol-addiction, gambling, chain-smoking, unnecessary violence and even conning men through seduction. She is a self-centered person and at times, when the whole crew is working towards something, she is seen lazying around in a corner. But along the way, once she starts spending time with the crew, she realizes the importance of relationships and her character drastically changes.