Within the vast spectrum of what’s considered a criminal act, we have ‘Criminal’, Netflix’s new police procedural anthology series set in four nations, and David Fincher’s excellent psychological procedural drama ‘Mindhunter’ sitting at almost opposite ends. Since this write-up pertains specifically to the French edition of the show, we are going to try and keep the discussion cornered on that as such.

Interestingly and curiously so, all the three separate acts presented in ‘Criminal: France’, and the people in question in particular, aren’t guilty of the heinous crime committed and under question within that episode themselves, but are otherwise intricately linked to the case somehow, introducing a very different angle through which to look at these shows from.

Compare that to Fincher’s ‘Mindhunter’ wherein the perpetrators being questioned are themselves the prime accused for the heinous crime, already incarcerated, and you’d get just a faint hint of what ‘Criminal’ tends to do. While ‘Mindhunter’ made an attempt to theorise what went inside the criminal mind, narrowing to it down to patterns and eventually criterion with which to view repeat offenders or “serial killers”, ‘Criminal’ attempts to humanise these proceedings, and almost succeeds.

Of course, it would be difficult doing that if the perpetrator of the crime would be in that chair being interrogated, thus the perceivable shift. There are then two distinct lenses through which this is achieved, or at least sought to be achieved. The first of course is through the person in question, directly or indirectly related to the victim, with little to partake in the crime itself. The second, through a little plot that stitches together the narrative through the three episodes in each anthology: the investigating police officers. Let’s quickly now jump to summarising the ‘France’ edition of the show, looking at each individual episode one by one. Read on. 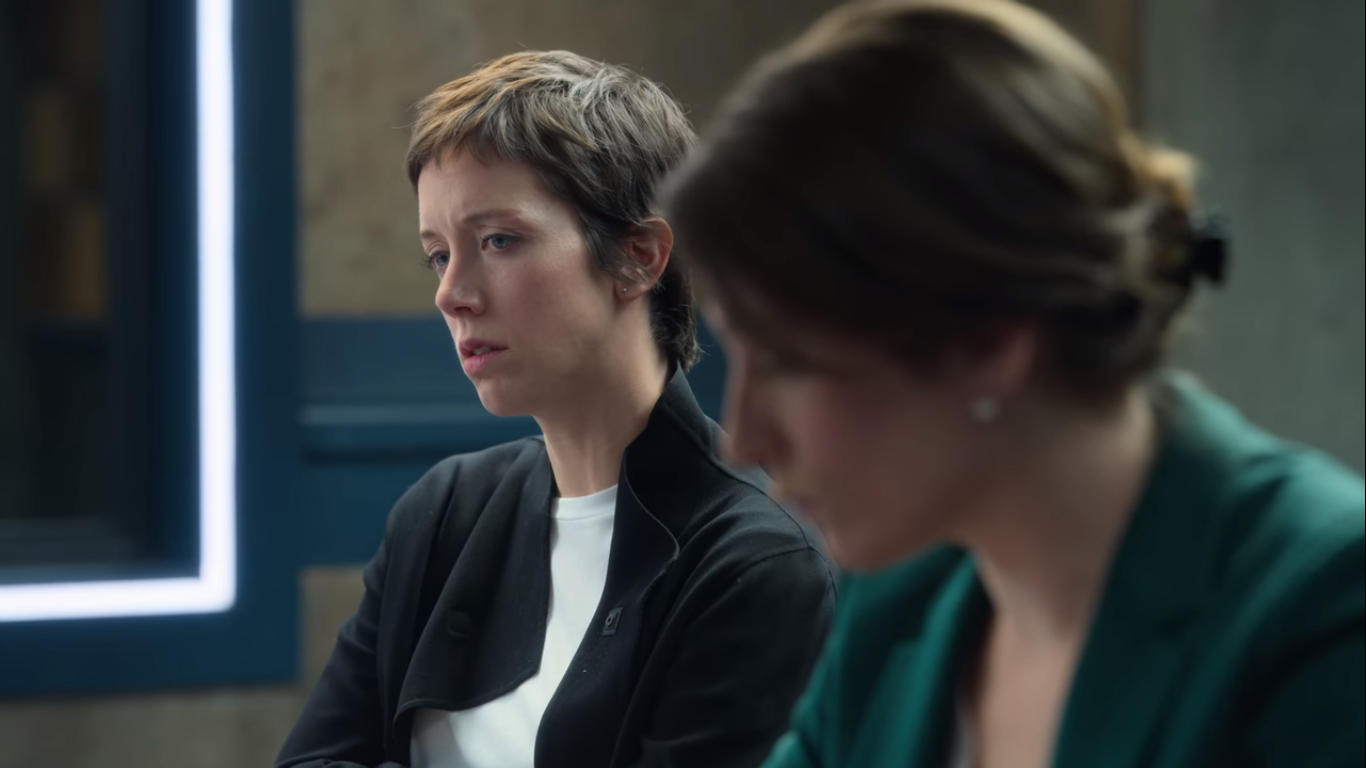 The first episode in the anthology series draws its narrative from the 2015 attacks on Paris in November at the Bataclan Theatre, where a group of terrorists carried out a mass shooting and took hostages at the location during an Eagles of Death Metal concert. Émilie is the person brought in for questioning, since she claims to have been at the site of the attack while it happened, the shootout leading to the demise of her boyfriend, Alex. The reason she has been brought in though is because the police suspect that she is lying and has wrongfully solicited a relief fund from the government, amounting to € 28,000.

At the end of the episode, it is revealed that the police had this information from the beginning of the episode, and the entire sequence of events at the questioning is intended to draw the truth out from her as a confession. There is incriminating evidence against her, including no alibis, no records of phone calls since her phone was conveniently switched off during the shooting, loopholes in her story of having escaped from the theatre while Alex was shot dead, and finally, a photograph that was taken 19 minutes after the shooting began, something that Émilie was using as her prime evidence of presence at the site of shooting, that she claimed would have been taken roughly two minutes after she escaped, with her stating it to be how long her ordeal lasted. Turns out that the lie isn’t just motived monetarily, but personally and romantically as well. Émilie wasn’t present at the site of the shooting while it took place, but ventured in much later, as revealed by the timing of the photograph. The person to expose her unfortunately turns out to be Meier, Alex’s best friend with whom Émilie was cheating on Alex.

The episode is aptly scripted in the first half in exploring where to draw the line when the suspected person him/herself is a victim of a crime inflicted through external means, and what would count as an insensitive violation of the witness’ human rights, and disregard for the trauma the person has been through. In the end, Émilie is charged with fraud, and the episode ends with her confessing to her lie beginning well before the attacks conspired due to a troubled relationship with Alex.

The second episode furthers the emotionally ambiguous core of the series partly explored in the first episode by bringing in the nature of the tragedy on completely personal, and professional terms, as opposed to a terrorist attack that shook the entire world when it happened. The titular character, Caroline, is a headstrong woman owning a large scale construction firm, brought in for questioning on suspicion of attempted murder of Walid Benaoud, a rebar foreman at the construction site that they were working on.

The company and Caroline are under immense pressure to deliver the finished building, with each delay causing them humongous fines, leading Carolyn to tighten up deadlines and asking workers to work overtime. Amidst this, Walid is found dead in a void in the building, falling from a height, and it appears that Caroline is the one involved, with evidence against her including her barrette discovered near where Walid died, and the apparent animosity between them, with Walid threatening a worker’s union strike and halting work due to the high pressure working environement, openly challenging her authority.

A significant moment in the episode is when gruesome photos of Walid taken right after his fall are shown to Carolyn in a fit of rage, and that is what is finally able to break through her tough exterior, with Caroline confessing to an affair between the two wherein Walid wasn’t initially aware of her true identity as his boss. She recounts the entire experience as a fairy tale of sorts, when the final revelation strikes one of the questioning officers, regarding the security fence on the floor from where Walid fell to his death. Turns out that Walid’s death was indeed an accident caused by hurriedly working overtime due to the pressure to deliver Carolyn had imposed, with the revelation following heels on the fact that anybody who would’ve wanted to murder Walid wouldn’t go to the trouble of unhinging the steel posts that comprised the fence, and would have simply taken off the wooden bars.

In the end, she is let go without being convicted of any charges, with one of the officers stating it was up to her to contemplate whether she was guilty or not, pushing the indirect nature and moral ambiguity of her involvement with Walid’s death to the edge and furthering the hypothesis on the age old theory: everything affects everything.

Easily the most affecting story out of the three, because here, the personal backstory of the accused’s life and involvement with the crime is riveting, emotionally. The accused brought in is a handsome, confident and successful salesman in his late 30s, accused of the murder of another guy in a predominantly LGBT neighbourhood in the city. He is initially accused of homophobia owing to first- hand account of hateful speech and hateful text messages that he and his workmates circulated on a common group, who were out celebrating that night to celebrate a successful quarter. The line of suspicion is directed towards him since he was the first discovered “fleeing” from the scene and was brought in with blood on his knuckles, although there is nothing to indicate assault.

The key to breaking this suspect lay in approaching him sensitively, and turning the tables on him. When the investigating officer of the opposite sex appears less intimidating and one to lend an ear, Jérôme reveals himself to be gender fluid, and confesses to cross dressing to live out a dormant part of his life. He also confesses to meeting with the victim, Remi, at the LGBT club, and indulging in sexual acts with him, when later Remi is beaten up by hate mongering homophobes, while Jérôme sought refuge to protect his identity and secret, failing to do anything to help Remi. He isn’t let go, but is let off the hook shortly if he agreed to identify the suspects and testify against them. He is told that his secret may have to be disclosed to the public for a successful trial. Here too, it is personal guilt more than direct involvement that toys with the accused’s state of mind, again raising the point of the burden of moral ambiguity. Could Remi have been saved had he been braver? That’s what would destroy Jérôme even years after the proceedings on this case were over.

‘Criminal’ shows you the vast world of possibilities that you can extract from a setup within four walls, and populating it with talented people who know what they are doing: be it the actors, or the ever observant cops that they are playing. What it also does through the anthology is make you believe that humans everywhere: the lawmen, and the ones seeking refuge in and from the law, operate just the same.

A curious observation in regard to this is the architecture that is the same throughout the entire series of 12 episodes, making you feel like you are watching a wonderful piece of theatre production. Sure, it has all the quips to be called a proper crime procedural, but there are tons out there, especially on Netflix, that are far better, principally because they are not anthologies. What works with ‘Criminal’ is the constrained setup, the resources at disposal, the end product, and the conversations it can inspire, coupled with the tiny differences I spotted earlier. I would have been vastly interested in seeing a similar crime procedural with the same setup within other countries like India, Japan and Nigeria. Season 2 perhaps?