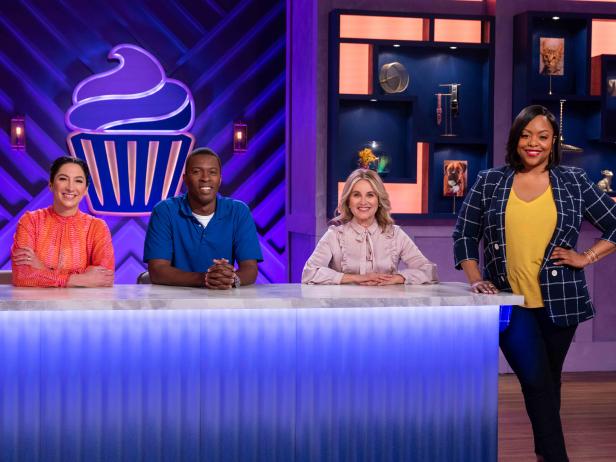 “You can’t buy happiness, but you can buy cupcakes. And that’s kind of the same thing.” Well, Food Network is surely geared toward dousing cupcake addicts with a whole dose of fondant, sweet-ilicious happiness! ‘Cupcake Championship’ is the platform’s latest foray into the realm of baking shows. Each episode sees four cupcake experts who face-off one another in two rounds to be crowned as the cupcake master. What’s more? There’s even a huge cash prize!

Cupcake Championship Cast: Who is in it?

‘Cupcake Championship’ is hosted by Kardea Brown and features Maureen McCormick as the main judge. To help her in her decision-making process, she is joined by a revolving panel of guest judges, who make weekly appearances. Some of the names included here are Nacho Aguirre, Lerome Campbell, Amirah Kassem, Stella Parks, Gesine Prado, and Joshua John Russell. Together, they decide, who would be declared as that week’s Cupcake Champion.

Cupcake Championship Plot: What is it about?

Did you think that no one can beat you in your love toward calorie-loaded cupcakes? Well, here’s the challenge. Watch Food Network’s ‘Cupcake Championship’ and you might have to reconsider your beliefs. This competitive cooking show, “features four world-class cupcake experts battling to achieve new levels of edible ingenuity in two rounds of competition for a $10,000 cash prize.” A food series that enters the channel’s slate of summer-released programming, it introduces us to some of the most creative cupcake makers from the country.

Cupcakes — these tiny pieces of baked deliciousness might appear small, but they showcase colossal amounts of artistry. In fact, the detailing is at a whole other level. You cannot smear the surface with layers and layers of frosting. Due to its small size, one needs to register the utmost care while balancing flavors and decorations. Now, when you have the stress of competition to add, we can easily take the name of ‘Cupcake Championship’ — which tests the baking skills of bakers, while considering taste, presentation, flavors, and embellishments.

Each episode comprises two rounds — Designer Challenge and Imagination Challenge. In the former stage, the candidates need to create cupcakes that adhere to a certain event or theme. Toward the end, the judges evict the poorest performer. The three remaining participants then proceed to the second challenge, where they need to curate a three-dimensional cupcake tableau with huge displays and multiple flavors.

The tasks thrown at the competitors are bizarre and extremely tricky. For example, in one of the episodes, they are asked to create edible plants out of cupcakes. Then, they need to make a beautiful flower bouquet using these tiny treats. Additional challenges involve the contestants’ creating detailed pet designs (where every feature must be clearly visible) and designing savory food imposters out of cupcakes. One more interesting challenge is the gender reveal cupcakes where the bakers need to fabricate their best revealing design.

Next, there is this round in which they are tasked with creating an elaborate fantastical farm with cupcake displays. A strange theme introduced by the judges is when the four bakers have to take a mystical journey by combining two mythical beings into a new entity. What’s more? The immediate next challenge for the remaining trio is to make a cosmos and an entire planet. We also see our bakers battling each other to create the perfect, edible snow globes. For the second round, they require gathering inspiration from Christmas decorations in order to create a life-sized Christmassy, cupcake-embedded display.

Cupcake Championship Season 2 Release Date: When will it premiere?

‘Cupcake Championship’ season 1 premiered on Food Network on July 1, 2019. Its total run comprised of just five episodes. The show is a fun take on the elaborate process of baking cupcakes. Additionally, the shorter span of the series enables viewers to hold their attention span and keeps them interested. Moreover, there are several differentiators that make this show stand apart from other similarly themed food shows.

As far as the next season goes, we have to consider how other similar show have done in the past. Shows like ‘Cake Boss‘ or ‘The Great British Bake Off’  have run for several seasons. So, there is no reason why ‘Cupcake Championship’ also follows a similar path and gets renewed for a few more seasons. Whenever that happens, we will update this section with ‘Cupcake Championship’ season 2 release date.

Food Network has not revealed a full-fledged trailer for the show yet. However, for any further update, you can always head to their official website for recent extras, clips, and exclusives. Psst! There is also a section on secret recipes, hacks, and tricks to be a baking master. Don’t forget to check them out!