15 Cutest Anime Boys of All Time 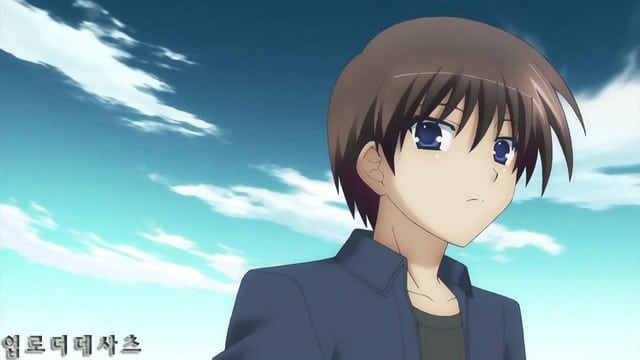 It is true that anime has provided us with some of the most beautiful female characters, but what about the guys? Have they slacked in that department? Nope, they haven’t. They have created some of the most stylish, cool, sexy and cute male characters. For example, if you take someone like Ichigo from ‘Bleach’ he is surely one of the hottest male characters. If you take child Goku from ‘Dragon Ball’ he is really cute. Today’s list will be covering the latter. See if your choices end up on the list. Here is the list of cute anime guys and hot anime boys. 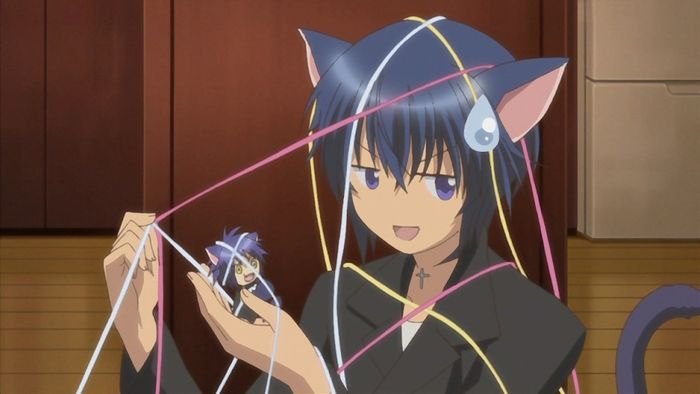 Yup, now we have the cute cat boy from ‘Shugo Chara!’, Ikuto Tsukiyomi. He is a tall and slim teenage boy and sports blue hair. He is mostly seen in his school uniform and wears a silver cross on his neck. He looks quite attractive when he is normal but during his character change he dons on an appearance like a cat and has two cat-like ears and a tail. 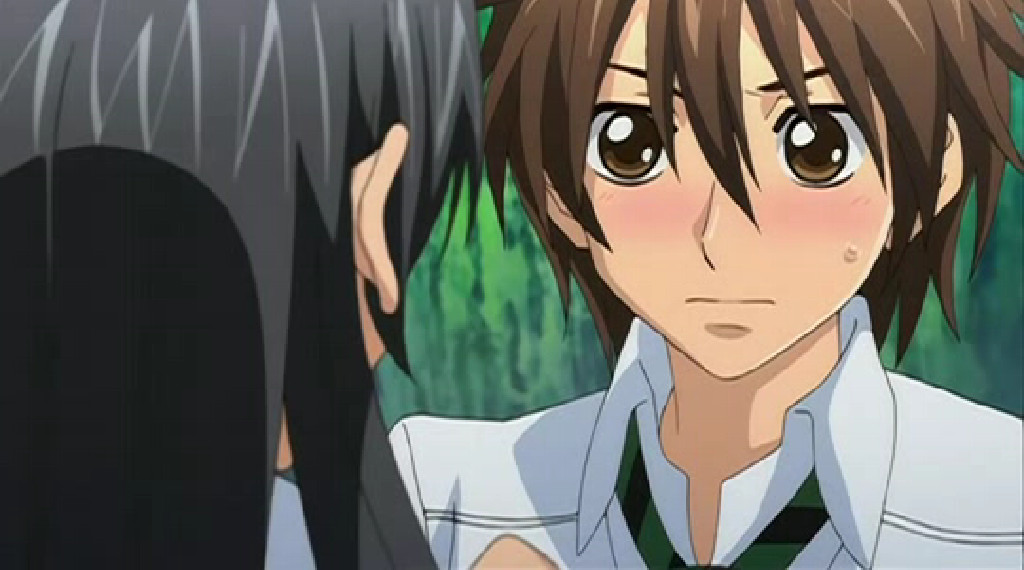 Tadashi Karino is the son of the chairman of Special A. He has a dark brown hair with large brown eyes. He generally wears his S.A uniform which consists of a white blazer, blue shirt, and blue pants. He is one of the main protagonists of the series and is also the cutest. Tadashi is in love with Akira and loves her cooking. He likes to wander around but is pretty smart and keeps his rank at 5th in his school. 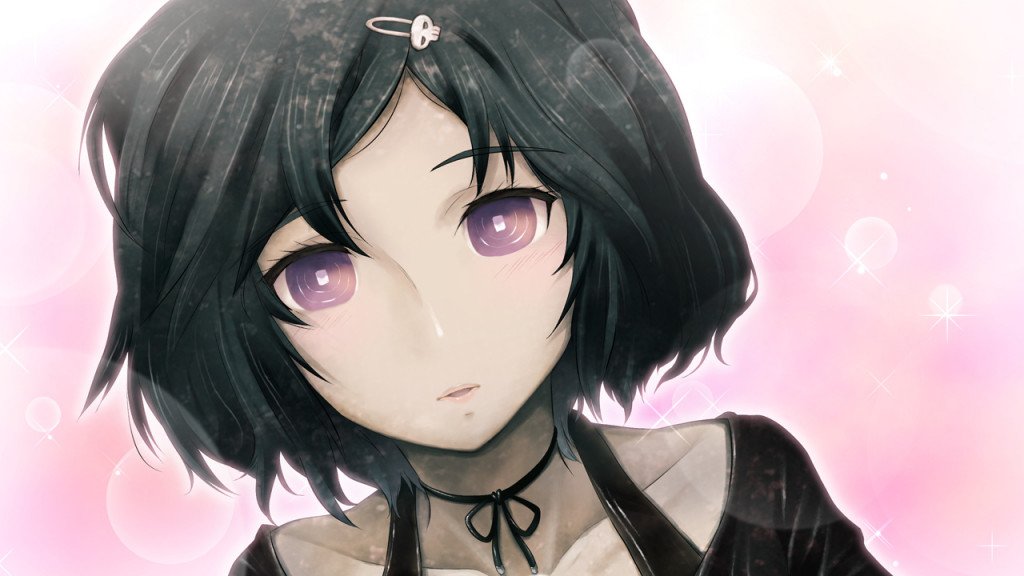 If you have watched ‘Stein’s gate’ you surely know why Ruka is on this list. He is biologically a boy but looks completely like a cute girl. Since I had watched this anime with subtitles, I actually thought that there was something wrong the subtitles as it referred to Ruka as a boy. But later on, I realized that Ruka actually is a boy. For those who haven’t seen the anime, could you have guessed from just the picture? 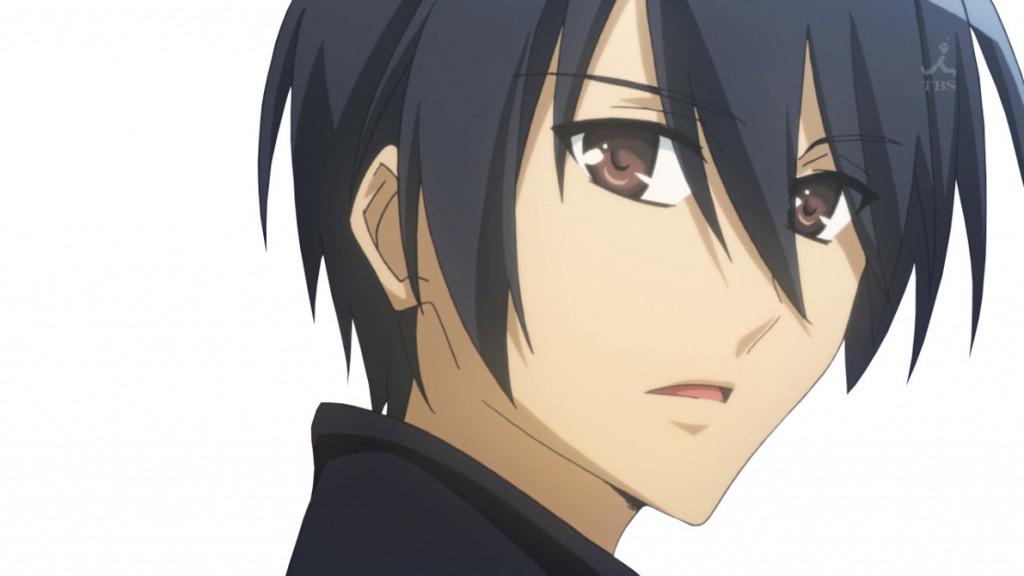 Kinji is the main protagonist of the series ‘Hidan no Aria’. He is a cool and badass character. He is built like a teenage boy should be and is often seen in his school uniform. Later (after leaving Butei) he wears a three-piece suit. Some consider him as one of the most handsome characters in the series and their consideration is justified. He is often sarcastic and cold though on inside he is a caring person. 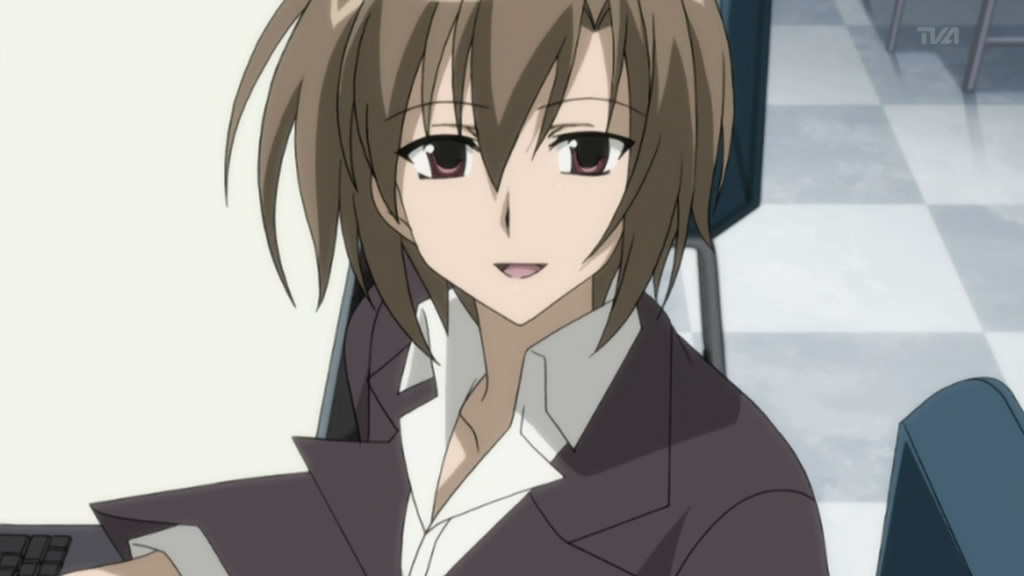 Ken Sugisaki is the cute male protagonist from ‘Seitokai no Ichizon’. He is the vice president of his school’s student council. Sometimes he is portrayed as a pervert (like who isn’t) though in reality, he is a good natured, hard working and very caring person. Often he becomes the joke of his class but sometimes his charismatic personality gains him attention from girls. 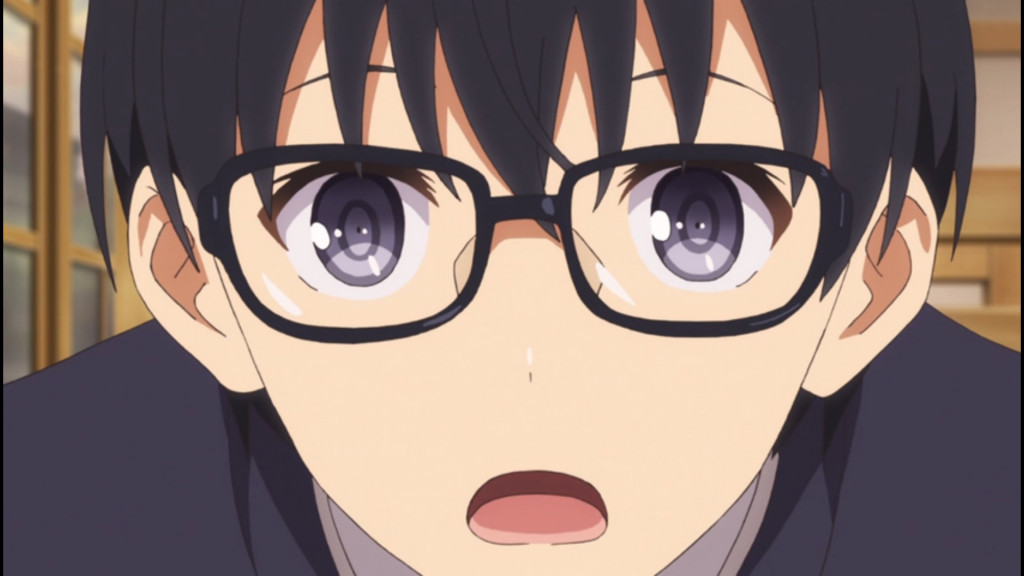 Tomoya Aki is the male lead from ‘Saenai Heroine no Sodatekata’ anime series. He is a studious person and is portrayed as a geek. He is mostly seen in his blue uniform and wears glasses (look at him; he couldn’t be geekier than that). Despite all this, you can see that he is quite a cute boy with an almost invisible nose and large eyes. 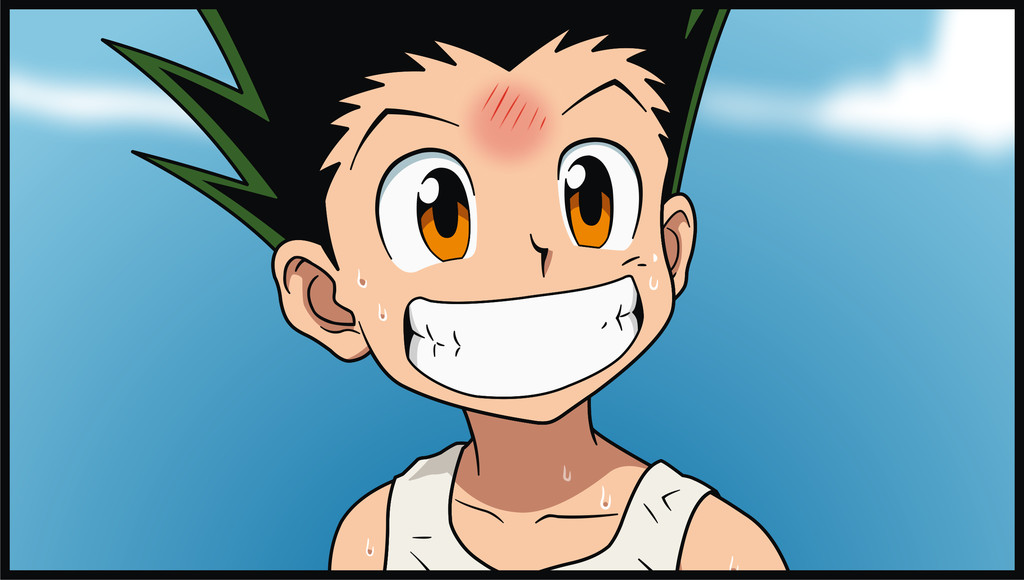 It’s time for a young teen to hit the list. Here we have the strong and skilled Gon Freecss from the ‘Hunter x Hunter’ anime series. He has short stature, spiky hair with green tips, large hazel eyes and wears a green jacket and large green boots. Later in the series, he only wears a tank top without the jacket. He wants to become a hunter to find his Dad. His best friend is Killua. 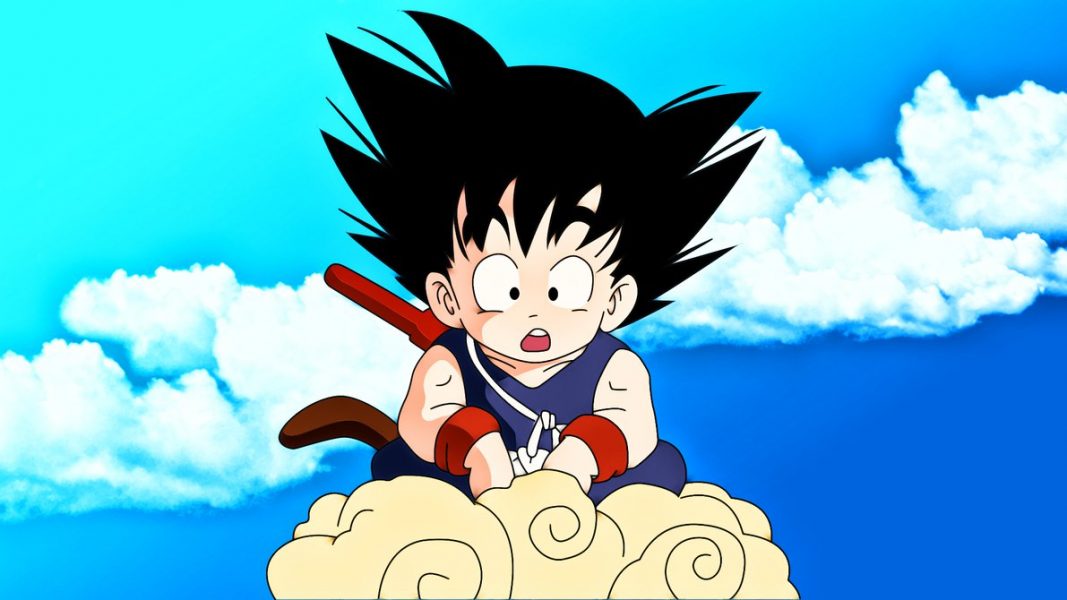 Okay! Okay! Hold up. I am not talking about the handsome Saiyan who is the defender of Earth. I am talking about the cute 12-year-old boy who went on adventures with Bulma and rode a flying cloud. He is one of the cutest male anime characters ever. His innocence adds to his cuteness and lands him in funny situations. Just looking at this pic makes me nostalgic. I watched these episodes so long back. 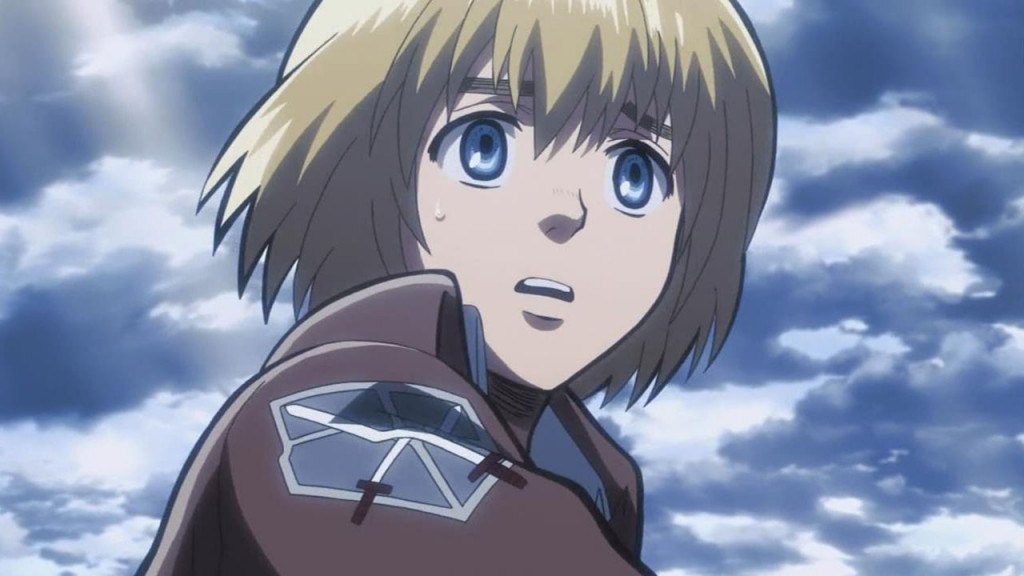 Armin Arlert is one of the smartest guys in ‘Attack on Titan’ series though he is not so tough as other characters. His intelligence has earned him a lot of praise and respect from his comrades and peers. He is also one of the cutest male characters in the series and has boyish features. He has blonde hair and is often seen in his soldier uniform. 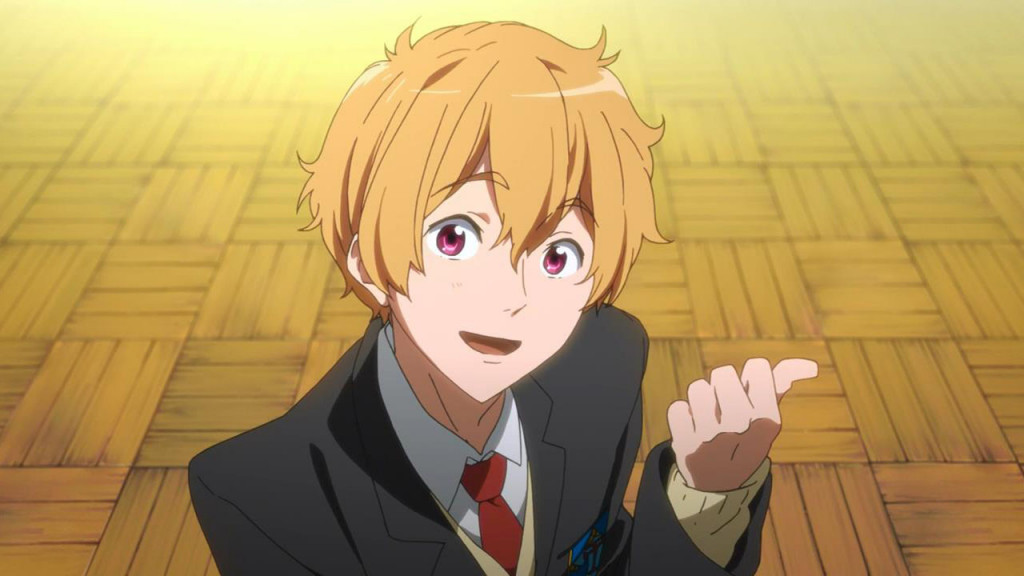 Nagisa Hazuki is a male anime character from ‘Free!’. He is in the swim team of his high school and is a talented breaststroke swimmer. He has blonde hair and unique magenta colored eyes. He has one of the best smiles on the series. He is cheerful and at times can act in a childish manner. 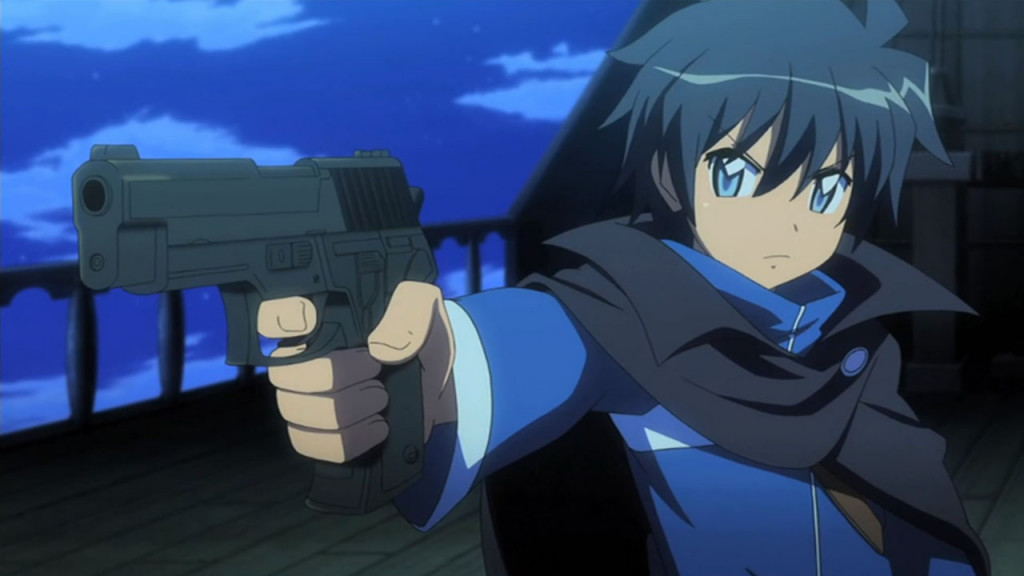 Let’s now move to the world of ‘Zero no Tsukaima’ where we have Hiraga Saito. He is one of the cutest characters in the anime. Mind it, by cute I in no way mean weak, he is skilled. He has dark hair which covers his forehead. He wears a blue sleeved jacket with high collars. He was summoned by Louise as her familiar and was treated like a slave. But later all that changed. Being cute he had attracted many female characters of the series. 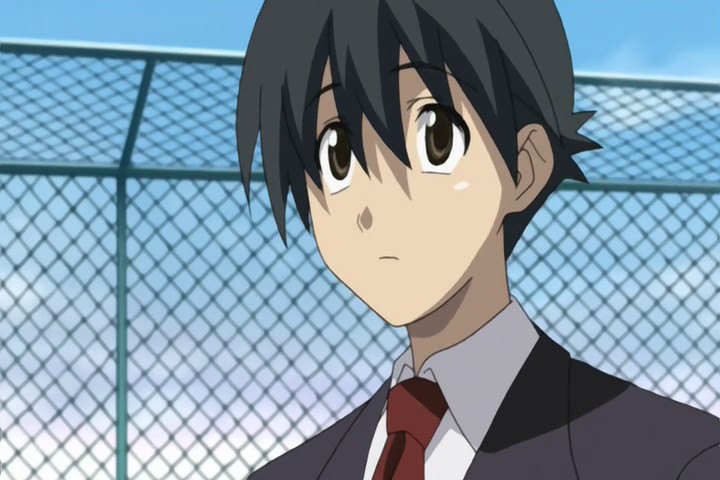 I was kind of reluctant to add him on the list since his personality is far from that of a cute boy but since in this list, I have only kept physical appearances as the criteria let’s include him. Makoto Itou has black hair and large eyes. This gives him a cute teenage boy kinda appearance. His build is not out of the ordinary but he looks great in his academy uniform of a gray suit. He has a high sex drive and doesn’t care about who he gets physical with. 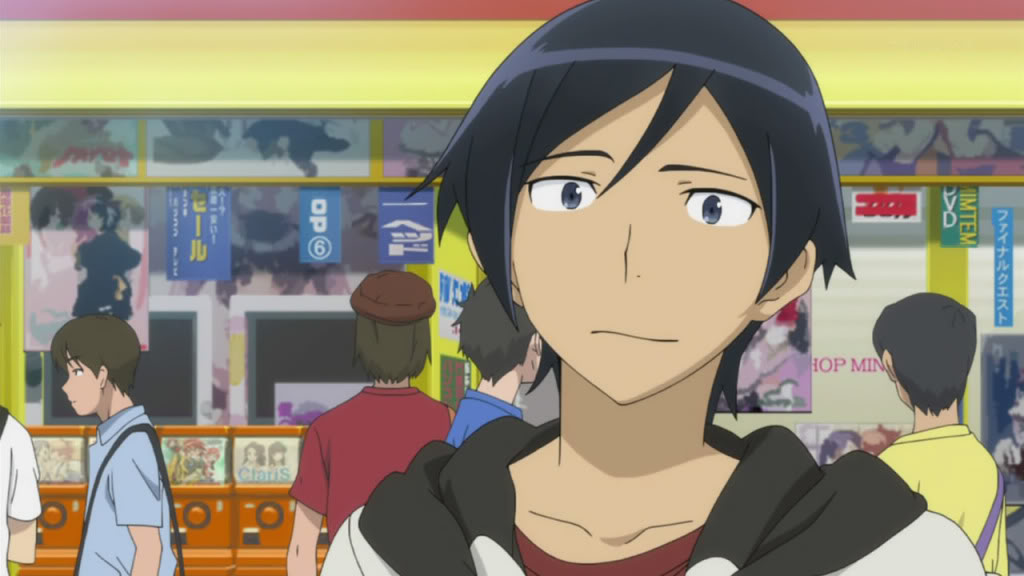 Kyousuke Kousaka is a good-natured male character who is in his late teenage years. Despite his average looks he is kinda cute and stands out in the series for that reason. Also, unlike Makoto who just cars about sex, he is quite loyal to his friends especially his sister Kirino. He has dark hair and dark eyes. He goes to extreme lengths for his close ones. 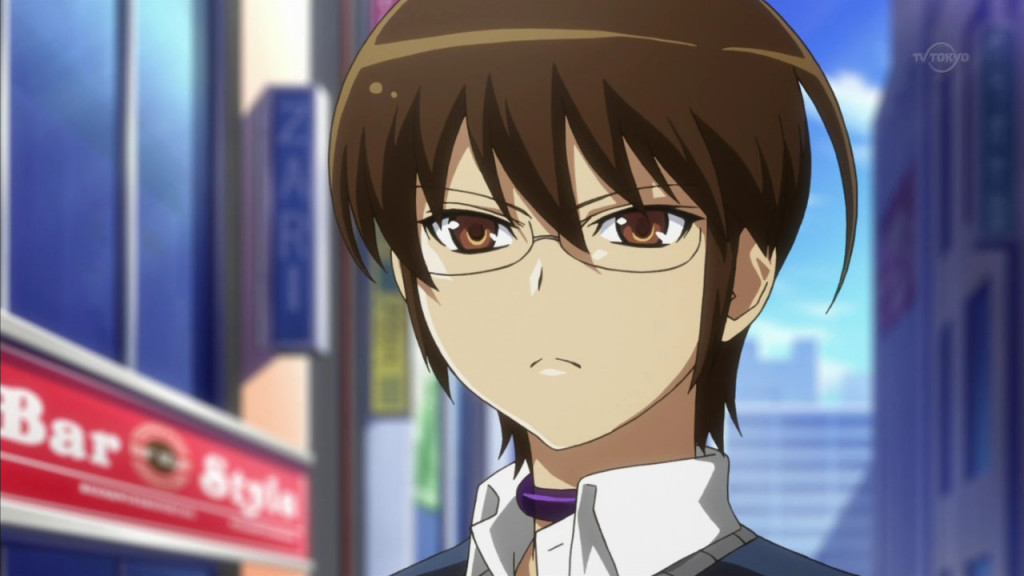 If you have watched the series ‘The World God Only Knows’ you must have noticed that Keima is an attractive male character. He is the main protagonist of the series. Keima is obsessed with games and can play continuously for unnervingly long durations. He mostly wears spectacles which makes look like a cute geek. There is another side to him as he transforms his appearances quite a lot. Sometimes he cross-dresses and becomes a cute girl (yup, I am not kidding). 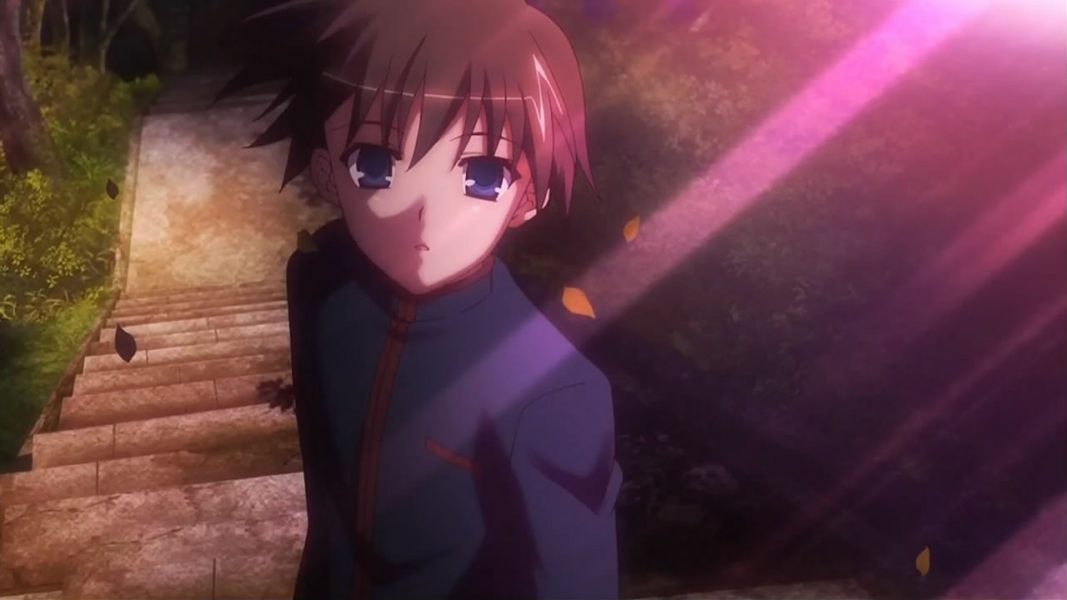 Haruaki Yachi is a cute teenage character from the ‘C3’ anime series. He is a good-natured high school student. He doesn’t like fighting much but if push comes to shove or his friends are in dangerous positions then he would not hesitate to pick up his Wathes to fight. His ability is that he is not cursed by using items which puts a curse on the owner. He has that cute boyish look on his face and has brownish hair which covers his forehead.