‘Frost/Nixon’ is a rather impactful movie related to one of the most controversial events in American politics: the Watergate scandal. Despite solely focusing on one major interview, the film manages to maintain the razor-sharp tension throughout. The 2008 film was nominated for as many as five Academy Awards including Best Picture and Best Director.

The film tells the story of Nixon’s most crucial interview after his resignation due to the Watergate scandal. The interview, conducted by David Frost, turns out to be extremely crucial for American politics as it sees Nixon admitting to his guilt, providing some form of closure to the public. The character of Nixon is played by Frank Langella while that of Frost is essayed by Michael Sheen. Several viewers would have wondered who the actual David Frost. Moreover, where is he now? Is he still alive?

Who Was David Frost?

David Frost was born on April 7, 1939 in Tenterden, Kent in England. He went on to study history at the University of Cambridge. He became prominent, in 1962, for appearing in BBC’s ‘That Was the Week That Was,’ a talk show. He would also go on to host the show’s successor, ‘ Not So Much a Programme, More a Way of Life’ which aired between 1964 and ’65.

Then, he hosted ‘The Frost Report’ which became successful internationally and led to a host of related shows. His American career began in 1968 when he hosted ‘The David Frost Show’ which aired on Group W TV stations. The interview, seen in the movie happened in 1977, making Frost a huge celebrity in the television and journalism world.

Frost also founded London Weekend Television. Apart from that, he has also authored multiple books including a one about his interview with Nixon which is also titled ‘Frost/Nixon.’ Apart from that, some of his other books include ‘Billy Graham: Candid Conversations with a Public Man,‘ ‘David Frost’s Book Of The World’s Worst Decisions,’ ‘The English,‘ and various others.

Frost was knighted in 1993, becoming Sir David Frost as a result. He was married to the actress, Lynne Frederick between 1981 and 1982. After that, he went on to tie the knot with the daughter of the 17th Duke of Norfolk, Lady Carina Fitzalan-Howard in 1983. The couple had three sons together. 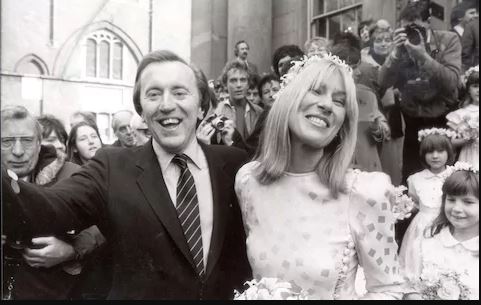 Unfortunately, David Frost is not alive. He passed away on August 31, 2013, at the age of 74. His cause of death was reported to be a heart attack while he was at sea, aboard Queen Elizabeth for a speech. “Mr. Frost’s highly varied television career mirrored the growth of the medium, from the black-and-white TV of the 1960s to the cable news of today,” the New York Times reported after his death.