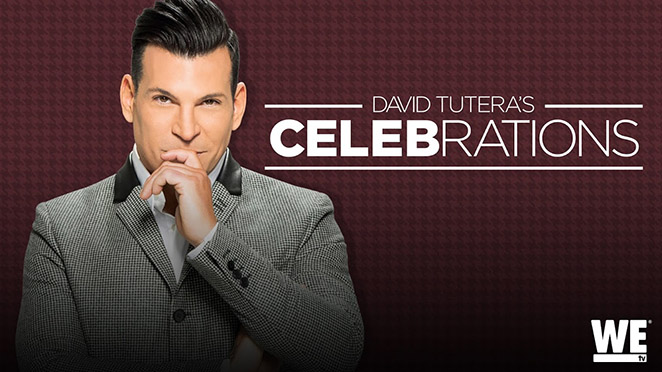 David Tutera’s Celebrations is a reality television series aired in America that premiered on 1st August 2014 on We TV. The series follows David Tutera who is a wedding planner who hosts small parties to the biggest od weddings. He also hosts amazing bashes for all kinds of celebrities in Hollywood. He has helped stars like rapper Lil’ Kim, Jersey Shore’s” JWoww and musical siblings Brandy and Ray J and many more. Sometimes planning big bashes for him the way he wants becomes very difficult when celebrities demand something outrageous.

This series is executive produced by Craig Piligian, Kate Farrell and Melodie Calvert. In the previous series, he had successfully planned various events like an anniversary party, a baby shower, and a dream wedding. Sarah Lafleur narrates this reality tv series. The series was formerly known as My Fair Wedding, My Fair Wedding: Unveiled, and David Tutera: Unveiled. In each episode, every woman sends him videotapes asking for help to plan their big or small events. He decides on one woman who he will help and starts preparations. He takes notes from them, but also adds his own touch to make the event more happening. He is the man every woman desires if they want their wedding events to be dreamy. He has only three weeks in his hands to create the most happening wedding event. This series is produced by Pilgrim Studios.

David Tutera’s Celebrations Season 4 Cast: Who is in it?

David Tutera’s Celebrations Season 4 Plot: What is it about?

In the third season, David Tutera plans out the wedding showers of actress and singer Vanessa Williams. Ian Ziering asks David to help him in planning out a charity fundraiser event. Montre hires David to make his event successful. David plans a birthday party in the south for the daughter of Cynthia Bailey who has been a part of Real Housewives of Atlanta. But things go out of hands when the daughter and mother start poking their noses into David’s work. David plans something special for the wedding of his assistant Montre. He enrols Saturday Night Live’s Leslie Jones to make the wedding showers more memorable. The pre-wedding shower takes a violent turn Leslie doesn’t show up at the celebration. David plans a birthday bash for a Persian prince. He is challenged to make the event breathtaking by Star Reza Farahan. Comedian Kim Coles ask David to help her out for her wedding.

As the wedding day gets nearer, they have to face some problems due to the bridesmaid’s dresses. Slomique starts to think that she is going to get replaced. In the next episode, David Tutera and his crew plan the wedding ceremony of Big Ang’s son. Benzino and Althea ask for David’s help to plan a baby shower. They are the famous celebs from Love & Hip Hop. David gets asked out by Todi to plan a birthday party for her three-year-old son.

David Tutera’s Celebrations Season 4 Release Date: When will it premiere?

There is no news yet on a probable air date for the fourth season of David Tutera’s Celebrations as the show has not been renewed by WE tv. Whenever a decision is passed on its renewal status and if it is in favour of the series, we can expect it to make a return in mid-2019. Keep an eye out for details.

Watch the official trailer of season 3 below and decide if the series is for you.