Where Was Dazed and Confused Filmed?

There are tons of coming-of-age movies, with the frequency of their production not seeing to drop anytime soon. There are so many of them that it has become increasingly hard for a bildungsroman to break out of cliches and be termed as an excellent production. Out of the countless ones that do exist, 1996’s ‘Dazed and Confused‘ is probably one of the best ones. Quentin Tarantino has rated it as the tenth best movie of all time.

The movie gave audiences Matthew McConaughey, but he wasn’t the only star in the film. There was Jason London, Ben Affleck, Milla Jovovich, Cole Hausser, Parker Poussey, Adam Goldberg, Nicky Katt, Joey Lauren Adams, and Rory Cochrane. ‘Dazed and Confused’ revolves around a bunch of teenagers in 1976 Texas on their last day of high school. The entire movie mainly focuses on the adventures of the kids on their last day, where they haze freshmen, go to a local pool parlor, and then at a keg party, among other things.

‘Dazed and Confused’ is as much of a period movie as it is a coming-of-age film. The film, as stated earlier, is set in 1976 in Texas. The film portrays the general mindset of the period extremely well. Apart from that, it also portrays the general setting well. Hence, it is natural for viewers to wonder where the movie has been filmed. Is it actually filmed in Texas? Or has it been filmed elsewhere? Did the makers pass off another location as Texas?

Yep, filming for ‘Dazed and Confused’ was actually carried out in Texas. That is how the movie manages to nail its setting authentically. Most of the filming was carried out in the city of Austin and Georgetown.

Firstly, the most important setting of the movie is certainly the school that the characters go to. Scenes set in the fictional Lee High School were filmed at Bedichek Middle School on 6800 Bill Hughes Road in Austin. However, the scenes set in the junior high school where the future freshmen go to were filmed at Georgetown elementary school. 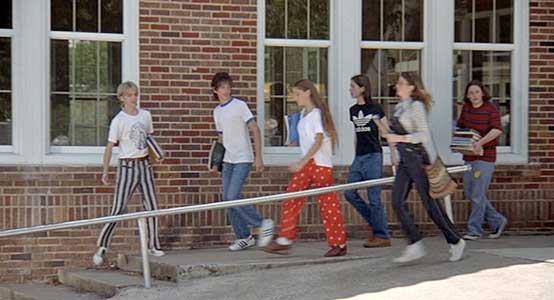 Another iconic location is a burger joint. Scenes set here were filmed at Top Notch Burgers on 7525 Burnet Road in Austin. Next, the party at Moontower was filmed at West Enfield Park on 2008 Enfield Road in Austin, Texas. Filming was also carried out at Americana Movie Theater on 2200 Hancock Drive.

Went to the Dazed and Confused shooting location while I was in Austin! pic.twitter.com/z5BpFOwE7b

The pool hall scenes were filmed at The Emporium on 6610 N Lamar Boulevard in Austin, Texas. Scenes set in Mike Newhome’s house were filmed at 2513 Great Oaks Parkway in Austin. Next, Toney Burger Center is where the scene involving Pink contemplating life on a football field is filmed. Mitch’s baseball game was filmed on Shoal Creek Rd and N Park Drive. Scenes set in Carl’s home were filmed on 6409 Wilbur Drive while ones set at Kevin’s home were shot on 5800 Coventry Lane. Filming was also carried out in Seguin, Texas.

Finally saw "Dazed and Confused". Cool too see I only live a few block from where "The Emporium" location was filmed. pic.twitter.com/iLoi5cpzgV