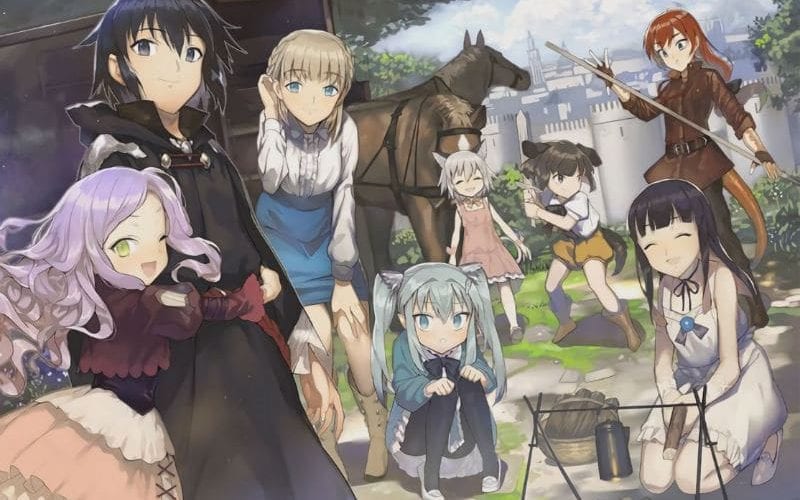 Animated by Silver Link, which is also known for creating other shows like ‘Kokoro Connect‘ and ‘Strike the Blood‘, ‘Death March to the Parallel World Rhapsody’ is the kind of anime you should watch without any expectations. In the endless slew of Isekai anime that are being produced by most Studios these days, ‘Death March’ is just another show with its clichèd tropes and a repetitive storyline.

Don’t get me wrong. I’m not saying that it’s absolutely unwatchable and is in fact, one of the best options out there for someone who is actually looking for a typical fantasy harem. But for others, like me, who are tired of the dreary themes of the genre and are looking for a show that offers something more than overpowered protagonists and fantasy gaming worlds, this is the kind of anime you would only want to watch when you’re willing to kill some time.

Death March to the Parallel World Rhapsody Season 2 Release Date: When will it premiere?

‘Death March to the Parallel World Rhapsody’ season 1 premiered on Jan 11, 2018 and with a total of 12 episodes, it ended on  Mar 29, 2018. Now if ‘Death March to the Parallel World Rhapsody’ is one of those anime shows that are created solely for the purpose of promoting their source material, then it might have a good chance of getting a sequel as its first season was able to double the sales of its light novel series. Even the ending of season 1 was quite ambiguous and hinted towards a sequel which could mean that the creators were at least thinking of renewing it initially.

So far, 17 volumes of the light novel series have been published and out of these, only 6 have been covered in the story of the anime. From the looks of it, the creators easily have enough source material content for two more seasons. That being said, no official announcements have been made by any of the Studios that were previously involved with the anime and even from a financial perspective, the anime is only slightly above average. And since Silver Link studio is already working on many new projects, we won’t be surprised if the studio just chooses to leave ‘Death March’ behind. Still, if I had to make a guess, I would say that ‘Death March to the Parallel World Rhapsody’ season 2 can release sometime in 2021. We will update this section as soon as we hear more.

The English dub of ‘Death March to the Parallel World Rhapsody’ is available on Funimation.

Ichiro Suzuki is an ordinary 29-year-old game programmer who takes his job very seriously and often works day and night on the MMORPGs that are assigned to him by his company. Even during the weekend, he decides to fix the bugs of the two MMORPGs he has been working on and after getting really exhausted after some time, he falls asleep. Upon waking up, he finds himself in a very different realm which has a stark resemblance with one of the games he had been previously working on. And from the looks of it, he has landed right next to the Start menu of the game.

As soon as he begins to absorb the situation, a group of lizardmen start attacking him and he is forced to use three special ‘Meteor Rain’ attack options to get rid of them. In the process of killing the creatures, he also kills a god and his game level instantly shoots up. Realizing the seriousness of the situation, he sets out to fulfill his purpose in the game so that he can eventually find his way out. With some of the most advanced magical skils and weapons rolled up his sleeve, he makes new friends in his new world and also tries hard to keep overpowered status a secret.

Ichirou Suzuki, known as Satou Pendragon in the gaming world, was once a hardworking young man who would passionately work on fixing bugs of MMORPGs. One day, he gets summoned into the worlds of one of his games and finds himself in the body of a 15-year-old boy named Satou who used to be his gaming avatar during test runs. After wiping out an entire army of lizardmen and rising up in ranks, he suddenly gets overpowered compared to all the other characters of his world. But to keep his true identity a secret, he disguises everything from his magical abilities to his weapons and along the way, builds many connections with the ones around him.

Satou finds it hard to adapt to the orthodox practices of his new world and strongly holds on to his previously held morals. He despises the whole idea of slavery and also hates how the criminals in his new world are executed in public. While many girls try to get his attention, he only believes in focusing on one. But despite his self-proclaimed loyalty towards Aze, he ends up getting engaged to several different women.

Arisa is a reincarnated person who still perfectly remembers the details of her past life. She has messy violet hair and big beautiful yellow eyes which make her look scary and often gives people the false impression that she could be a bad omen. This is one big reason why she remains unsold as a slave. It turns out that she comes from an alternate version of Japan which is very similar to the one Satou lived in. But in her world, even the minor anime shows were widely popular. In her past life, she was a hardcore Otaku and loved making cosplay costumes for herself. She later falls for Satou and often pretends to be asleep just to use him as her pillow. She and Mia are together named the “impregnable fortress duo” as they often join forces to stop Satou from hooking up with women who have bigger busts than them.