Where Is Dennis From Hoarders Season 11 Episode 5 Now?

A&E’s ‘Hoarders’ gives us a raw look inside a disease that has the capacity to bury its sufferer, literally, in its symptoms. Following some of the biggest, most extreme hoards in the country, the series profiles how an individual’s life can be torn apart just because they are unable to part with their possessions, no matter how useless or tiny they are. Their personal predicaments render their home to be nothing but a mountain of junk and garbage that threatens to overtake not just their life, but their relationships as well.

If the hoards don’t positively respond to professional help that is being given to them, the consequences sometimes involve eviction, jail time, or even social services interfering, especially in the case where the hoarding families have small children. The series was recently brought back for its 11th installment, and new episodes are currently airing on Monday nights – at 8 p.m. ET or 7 p.m. CT on A&E. Its most recent episode, though, episode 5, titled ‘Dennis,’ gives us proof of the risk of eviction.

Dennis’s Situation Is That of Life or Death

Watch the team take on one of the most challenging hoards yet on #Hoarders TOMORROW at 8PM! pic.twitter.com/W3A4kJrj1T

The official synopsis for Dennis’s episode on the A&E website reads: “As a retired architect, Dennis sees the value in re-purposing and using materials for all types of projects. This has led Dennis to collect a massive amount of clutter over the years. Being the primary caregiver of his wife, he has no more time to spend completing projects he once desired to accomplish.” Therefore, his home is left in disarray and with an unfathomable number of fruitless objects.

As the camera pans over the sections of his house that probably account for the most garbage, in the snippet shared by A&E, you can hear the voiceover where a woman says, “It’s critical – its life or death at this point,” which clearly indicates that if Dennis does not take the help given to him or cleans up his act (and home), there would be nothing and no one left in his life. He needs to buck up, or he would end up losing not just himself, but his wife and the rest of his family as well. The great part, though, is that even Dennis agrees. After all, he did say, “One man against this amount is just hopeless.”

Dennis Turns Over A New Leaf 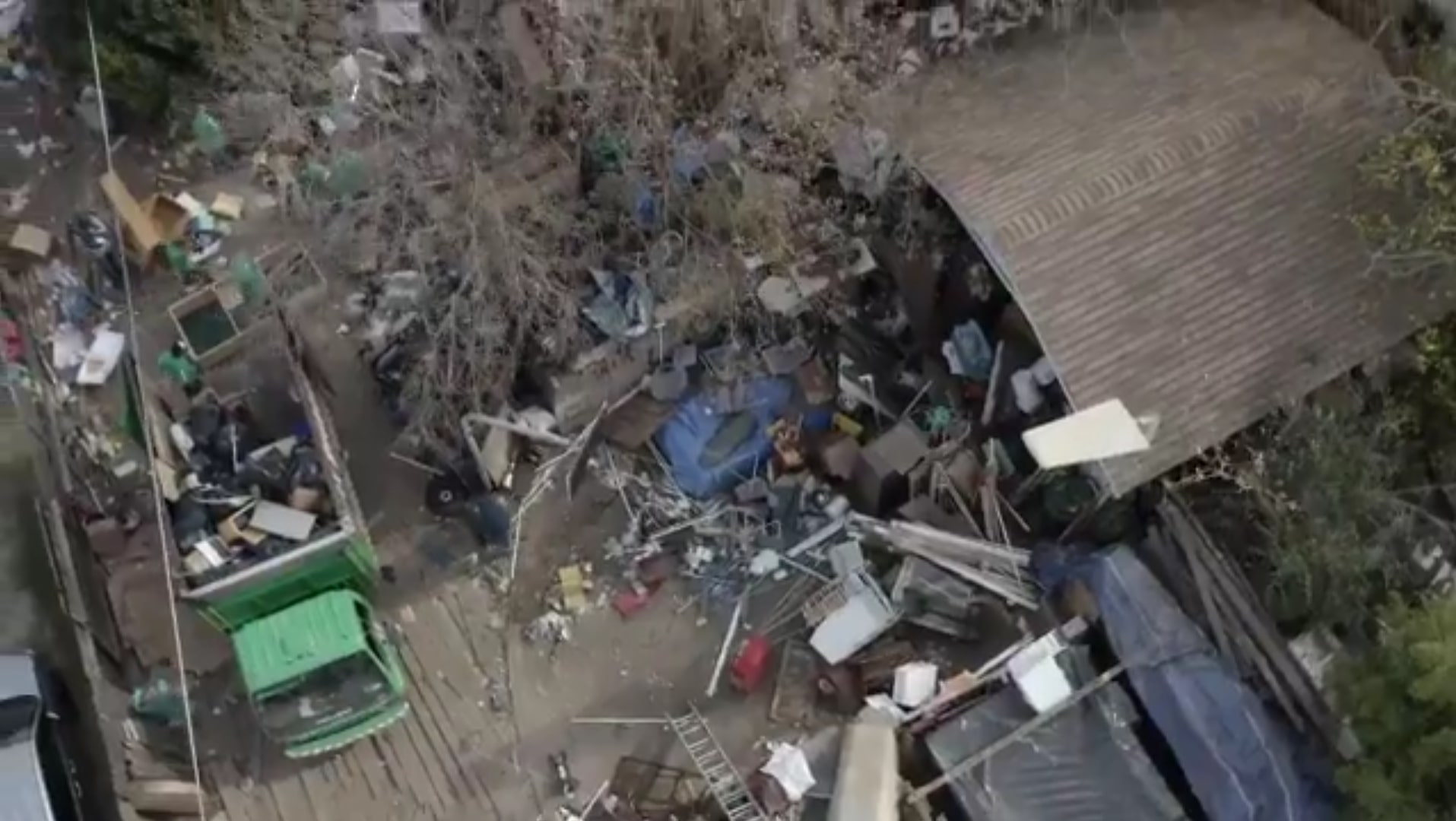 In a 30 second snippet, a whole story is told. As Dennis’s family, friends, and the cleanup crew begin tackling each room, he obviously breaks down. But, it seems as if its not just for a single reason. Of course, he doesn’t want to permanently part with his possessions, but he also fears the city taking over his property if he doesn’t do something about it. The simple reason for that is shown to us with an aerial view of his house. It turns out that his stuff takes over not just the insides of it, but the outside portion as well. And, the stacks and stacks of objects are sure to be extremely unsafe and unhygienic.

A man, possibly Dennis’s son, gets frustrated at one point and tells him face to face that “we’re not trying to screw you, we’re trying to deal with this.” He’s the same one who talked to the experts and nodded appreciatively when he heard them promise that they’re going to make the situation much better. And, thanks to that push of his family and well-wishers, Dennis himself starts to actually act on his words as well. He picks up some scattered items and admits to the camera, and the world, that it is finally time for him to “turn over a new leaf in life.” It’ll be challenging and it’ll be heartbreaking, but tonight’s episode will also be invigorating.

Read More: Where Is Becky From Hoarders Season 11 Episode 4 Now?