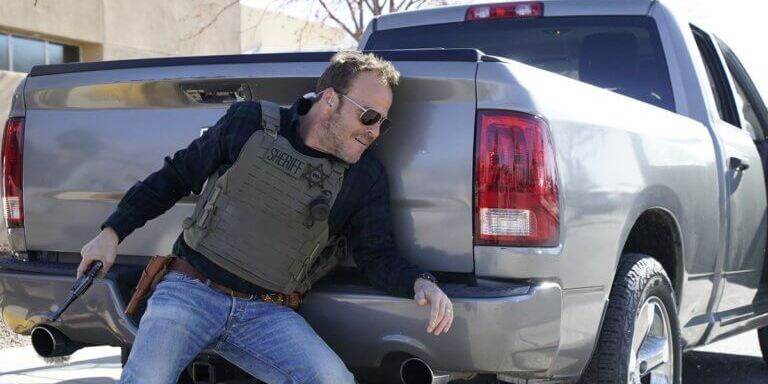 Created by Will Beall and David Ayer, ‘Deputy’ is a cop drama that chronicles the life of Deputy Bill Hollister whose life changes when he is asked to fill in the position of the Acting Sheriff in the Los Angeles County Sheriff’s Department, after his predecessor passes away, suffering a cardiac arrest. Bill reluctantly causing a chaos among the officers in the department who are irked by Bill’s brutal honesty. Will he sustain the politics or succumb to the pressure?

Since its premiere on January 2, 2020, season 1 has managed to satiate the ardent fans of procedural cop-drama. So far in the first season, we have seen Bill pulling all stops to make sure the department doesn’t get contaminated by corrupt bureaucratic forces. He doesn’t always like going by the book, which has often put the lives of his wife Paula and daughter Maggie, in danger. Although reluctant at first, Bill has grown to love his position at the LACD and plans on continuing his mission to serve justice, come what may. But his road to glory is paved with sacrifices.

Episode 10 released on March 5, 2020. In the episode, things get way too personal for Deputy Charlie Minnick and a new member arrives, threatening Bill’s position at the department. Problem recalling? Don’t worry. We have added a recap for you. Also, in case you want to know the details of the upcoming episode, i.e ‘Deputy’ season 1 episode 11, read on.

The upcoming episode has been titled ‘Paperwork.’

In episode 11, we can expect to see the aftermath of an arrest that Charlie and Joseph make while investigating a drug deal. Unaware that the man is linked to a larger drug organization, the arrest gives rise to a major threat, looming over the station. Since Theresa is now pregnant, she and Cade might face difficulties while trying to adopt their foster children, who according to the officials, must be united with their biological relatives. Meanwhile, as the curtains are closing on his tenure, Bill might make a startling discovery surrounding his position in the department as Sheriff, giving rise to further complications.

Where to Watch Deputy Episode 11 Online?

You can catch ‘Deputy’ season 1 episode 11 on Fox at the above-mentioned time. You can also watch the episode on Fox’s official website.

If you don’t have a cable subscription, you can stream the show on Hulu, Fubo TV, and Direct TV. Another way you can watch ‘Deputy’ is by availing the VOD service on YouTube TV, or by purchasing the episodes on Amazon Prime.

The episode is titled ‘School Ties.’

Can Bill ever have a moment where he is untroubled by worries? Well, if you thought Jerry and Mimick are the real thorns on Bill’s path, you might want to rethink. Episode 10 adds a new member in Troubleville – District Attorney Riley, a new candidate eyeing for Bill’s position.

Riley is Jerry’s worst nightmare, who now has to tear down not one, but two officers. What could possibly go wrong? Well, after rescuing her student Isabelle, Charlie realizes how Bill has always held her in high spirits, and that’s why he has bestowed upon her, the duty to train Joseph. Therefore, she has a change of heart and decides to forgo spilling all the information she has collected on Bill, to Jerry. Wow.

Meanwhile, Riley and Bill clash over a case, wherein Riley accuses Bill of nepotism, referring to Joseph, and Bill calls her out for her lack of experience and judgment, saying: “I got a soft spot for cowboy diplomacy. But with nepotism, I agree. Fortunately, that’s not what this was. LACD was pinning a murder on an innocent man. You’re letting a corrupt police officer walk for your own political benefit as you aim to run a department that you’ve never worked in, and you think you can do it better than all of the people who climbed their way up on the inside.” Also, the episode features a beautiful father-daughter moment when Bill meets Maggie’s boyfriend Wyatt, and then the two go horse-riding together. At the same time, Cade and Theresa fear losing their foster children.