All We Know About Derynn Paige From Double Shot at Love 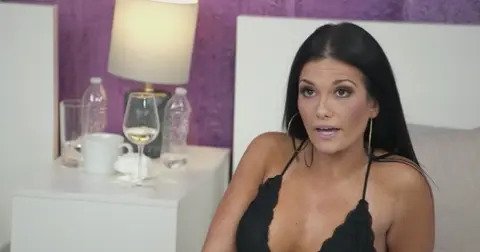 ‘Double Shot at Love,’ a 2019 reboot of a 2008-2009 reality dating game show called ‘A Double Shot at Love,’ is well into its second season. Starring’ Jersey Shore’ alums Vinny Guadagnino and DJ Pauly D, ‘Double Shot at Love,’ produced by MTV, has seen considerably more success than its predecessor. It follows a similar format wherein a host of young, beautiful women share a house with the hosts and vie for their affections. Derynn Paige was among the 20 contestants in Season 1 of the show and fell just short of winning the heart of Pauly D.

She was eliminated in the explosive finale to Season 1 when Pauly announced to everyone’s surprise that he’d sail solo for a while instead of dating any of the contestants. However, although Derynn’s charms might have failed to bewitch Pauly, she succeeded in winning the hearts of the viewers and found herself among the considerably limited cast for Season 2. With Season 2 well underway, Derynn’s popularity is at its peak, and many fans are curious to know more about her life. If you’re interested in Derynn’s life outside the show, we have everything you need to know.

Derynn Paige: Where is She From?

Like many of the contestants in the show, Derynn is an American citizen by birth and was born in the borough of Franklin Lakes, located in Bergen County in the East Coast state of New Jersey. According to her Twitter handle, she currently resides in Hoboken, New Jersey, when she is not working. Here’s Derynn at home.

💰💴CASH MONEY BABYYY💴💰 I’ve teamed up with @gobouncely & am choosing one of you to win a $250 gift card to Amazon!!! To enter into the #giveaway you must… . 🐰 Follow @gobouncely . 🐰 Repost this photo to your story . 🐰 Sign up with your email on http://GoBouncely.com . Entries are open until 11:59pm PST on Sunday, February 2nd! Winner will be announced the following day in the afternoon! Please note that the randomly selected winner must provide a US mailing address where we can send their prizes. In the event they cannot provide a US mailing address or do not respond, a new winner will be randomly selected from the entries! For entry: A) Post in your story, Follow @gobouncely, and Sign up with a valid email at GoBouncely.com B) Via email at [email protected]

For a fashion icon and a model, Derynn is highly educated, and what is most surprising perhaps are her areas of expertise. To the best of our knowledge, she holds a degree in Psychology, Economics, and Entrepreneurship from the prestigious Rutgers University in New Jersey. She has furthered her education and developed herself by taking classes at the Parsons School of Design in New York City. Here’s a picture of her graduating from Rutgers.

If her educational qualifications are not proof enough of the brains which come with this beauty, Derynn is also a successful entrepreneur and has her clothing line, Goddess of Easton, which she founded in 2016.

By the second episode of Season 1 of ‘Double Shot at Love,’ Derynn had already made her mark on the show and was considered to be among the hottest contestants. Despite being a fan favorite, however, her efforts to woo Pauly fell just short of the mark, and she was eliminated in the finale because Pauly deemed that their connection was just not strong enough for them to start dating.

However, her elimination did not stop her from being on Pauly’s mind, as she was chosen to star among the limited cast to Season 2, which premiered on June 11, 2020. Will Derynn find the date that she is looking for in Season 2? Only time will tell, so follow Season 2 to follow her journey on the show.

Read More: Are Vinny and Maria From Double Shot at Love Still Together?