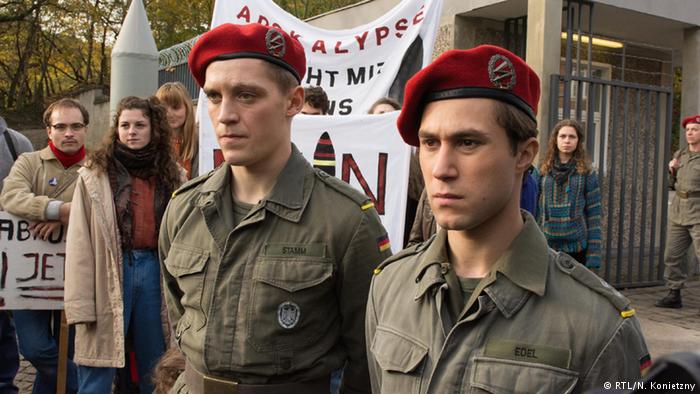 Deutschland 86 is an American Cold War espionage Television series that debuted on October 19, 2018 on Amazon Prime (Germany) as well as Sundance TV (US). The series is set in 1986 and tells the story of an agent of East Germany named Jonas Nay. He is sent back to the battleground after some sins he is accused to have committed in Africa. Deutschland 86 is a sequel of the 2015 series Deutschland 83. It is created by Anna Winger as well as Joerg Winger and written by Anna Winger. The series also stars Maria Schrader, Sonja Gerhardt, Alexander Beyer, Sylvester Groth, Ludwig Trepte as well as Chris Veres. Deutschland 86 is produced by Tim Greve and edited by Boris Gromatzki, Jens Klüber as well as Robert Stuprich in UFA Fiction.

Deutschland 86 Cast: Who is in it?

Martin Rauch is played by Jonas Nay. He is a former border patrol guard who belongs from East Germany. In 1983, he was sent as an undercover in West Germany. He was a part of an operation which successfully stopped a pre-emptive nuclear strike which was done by the Soviets. He planned to stay hidden from everyone after the Soviets tried to attack NATO.

Lenora Rauch is played by Maria Schrader. She is a former handler for the Staci and Martin’s aunt. Today, she is working in Cape Town. Rose Seithathi is played by Florence Kasumba. She works with Lenora. She is also an African National Congress (ANC) operative.

Walter Schweppenstette is played by Sylvester Groth. He is an anonymous father of Martin and the former boss of Lenora. He is also the former worker at the East German Permanent Mission (StäV). He was removed from the authority after the incident in 1983.

Annett Schneider is played by Sonja Gerhardt. She is a junior intelligence agent in the inner circle of the East German StäV. She is the former fiance of Martin. Brigitte Winkelmann is played by Lavinia Wilson. She is the wife of the West German Trade Commissioner. She also works as a dentist.

Alex Edel is played by Ludwig Trepte. He is a former member of the Deutschland 83 and partner of Martin. He is a gay West German who today works along with Tim in an AIDS hospice. Tobias Tischbier is played by Alexander Beyer. He is the former handler of Martin who belongs from the Stasi’s foreign arm named the Main Directorate for Reconnaissance (HVA). Now, he is a member of Parliament for the Alternative Party.

Tina Fischer is played by FritziHaberlandt. She is the sister of Thomas Posimski who was imperfect to be in West Germany. She works as a doctor in East Germany. Thomas Posimski is played by Vladimir Burlakov. He is Tina’s brother and Annett’s past lover. Barbara Dietrick is played by Anke Engelke. He works as a new financial consultant to the StäV. Tim is played by Chris Veres. He is a gay American who also works at an AIDS hospice along with Alex. Markus Fuchs was played by Uwe Preuss. He is a former associate of Walter. In the past, he was promoted to take Walter’s position at StäV.

Ingrid Rauch is played by Carina Wiese. She is Martin’s mother. Mrs Netz is played by Michaela Caspar. Today, he works in the West German Intelligence Service (BND) as an agent. He is a former secretary of Alex’s father.

Deutschland 86 Plot: What is it about?

As Deutschland 86 begins, Martin is rescued by Lenora in 1986. She asks for his guidance to help her with selling a shipment of West German weapons. Later on, Martin realizes that the weapons are going to be used in the Angola War. He destroys General De Graaf to save his people. Lenora and Martin decide to travel to Angola with all the weapons. Martin steals Gary Banks’ wife after sleeping with her. In the ending of this episode, Gary takes Martin and Lenora to the De Graaf. Later, Martin tries to bargain the weapons on arriving at the oil refinery. Gary, Lenora, and Martin steal the weapons, money and the diesel. Their enemies plant a bomb, and Martin is unable to defuse it. Martin is shot by the rebels in the process of fleeing along with Gary and Lenora.

Gary travels to Libya to help Martin recover fast. Brigitte wants to take Lenora and Martin hostages. Walter starts working in the inner circle to illegally transport goods to South America. He decides to inform Ingrid that Martin is supposedly dead but stops from saying so. We find out later that Martin is in a hideout in Paris. Nina and Walter decide to find Martin when they realize he is alive. After the reunion, Martin warns everyone involved that Samira is planning a terrorist attack. Samira’s plan to bomb the Grand Hotel Voltaire is prevented, so she plans to bomb a nightclub in West Berlin instead. A lot of action and thrill unfolds, keeping the audience on the edge of their seats.

Deutschland 86 Season 3 Release Date: When will it premiere?

Deutschland 83 season 2 premiered on October 19, 2018. As far as the next season goes, we don’t have an official announcement yet. Though considering the show has seen two successful seasons, Deutschland 83 and Deutschland 86 already, there’s every chance that the show will be renewed again. If show does receive a renewal, we will update the section with Deutschland 86 season 3 release date.

While we wait for an update on Deutschland 86 season 3, check out the season 2 trailer to refresh your memories. If you haven’t seen the show yet head over to Amazon Prime to catch all the episodes of the previous season.