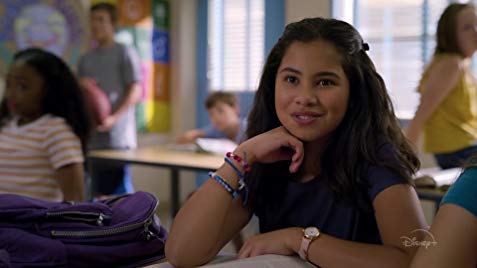 ‘Diary of a Future President’ is Disney+’s first scripted television show after its initial slate of productions which included the massively popular Star Wars show, ‘The Mandalorian.’ It adds a creative and rather topical twist to the increasingly conventional coming-of-age story of a colored character.

Perhaps the most noteworthy thing about ‘Diary of a Future President’ is the fact that Gina Rodriguez is an executive producer for the show, apart from acting in it as well. She plays the older version of the protagonist, appearing in a handful of flash-forward scenes.

The series follows the Cuban-American 12-year-old, Elena Canero-Reed who dreams of becoming the President of the United States. The story is told through Elena’s diary entries from an older version of herself. The show focuses on her middle-school life as she juggles the personal and social challenges of adolescence.

Elena lives with her mother and her older brother. Elena’s mother starts dating a lawyer from her workplace. Her mother’s new relationship adds to Elena’s pressures of growing up. The series certainly adds a positively inventive spin on the standard bildungsroman television story.

Where Was Diary of a Future President Filmed?

Many of you might be wondering where ‘Diary of a Future President’ is filmed. The show mostly follows Elena coming of age as she handles middle school, her presidential ambitions and her family life. The show is mostly set in familiar locations including Elena’s home and her school.

Like most American movie and television productions, ‘Diary of a Future President’ is entirely filmed in Los Angeles, California. The show’s first season started filming in July 2019.

It isn’t surprising that the television series is filmed in L.A. It is not set in any exquisite location. Plus, its story is fairly simple and undemanding when it comes to production design. Apart from the future president track, ‘Diary of a Future President’ is mostly a coming-of-age story. It mostly takes place in the protagonist’s home and school.

Such scenes can easily be filmed in soundstages in a production house. That is always more convenient, both technically and logistically. If we were to make an educated guess, the show might have been filmed at Walt Disney Pictures’ production studio in Burbank.

A lot of Disney television series are filmed in Burbank in Los Angeles County, California. The studio was opened in 1940 and sprawls over a staggering area of 51 acres.