Did Mark McGwire Use Steroids?

30 For 30 ‘Long Gone Summer’ on ESPN recounts the historic Home Run Chase between Mark McGwire and Sammy Sosa. The two players almost singlehandedly sparked nationwide interest in baseball even making it to the evening news. However, the glowing success of McGwire and Sosa was tainted by the fact that they both played during an era where baseball was infamous for drug use. So, was Mark McGwire doping, or was he just that good? 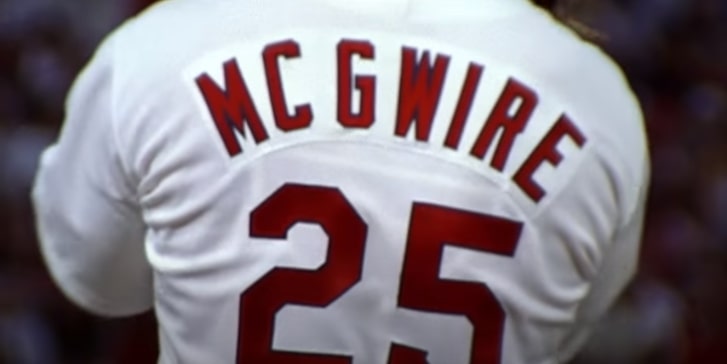 McGwire, nicknamed Big Mac, has had a stellar career but his reputation has been in ruins since March 17, 2005. Jose Canseco, McGwire’s bash brother, came clean saying that he and Big Mac used performance-enhancing drugs in the 1980s, and Jose himself had injected his broad-shouldered teammate. However, McGwire refused to comment on it, even at the congressional hearing, repeatedly resorting to the phrase “I’m not here to talk about the past.”

However, in 2010, the legend came clean admitting that he was on performance-enhancing drugs when he broke the home run record in 1998. McGwire’s statement to the Associated Press confirmed that he’d been using steroids on again and off again for about a decade. When McGwire came clean, he said to CBS News, “It’s very emotional, it’s telling family members, friends and coaches, you know, it’s former teammates to try to get ahold of, you know, that I’m coming clean and being honest. It’s the first time they’ve ever heard me, you know, talk about this. I hid it from everybody.”

At the same time, he confirmed that he also used growth hormones but was not sure if his drug use resulted in the injuries that caused him to retire in 2001, at the age of 38. McGwire stated that he used to dope to overcome injuries, get back on the field, and earn his multimillion-dollar salary. Mark said, “I did this for health purposes. There’s no way I did this for any type of strength use.” However, McGwire has been quick to dispute that the drugs gave him powers to hit more home runs. He stated that no external factor could improve the hand-eye coordination needed for home runs, and went on to assert that he got so good by studying pitchers and making his swing shorter.

The decision to come clean about his steroid usage was prompted when Mark was to become the hitting coach of the St. Louis Cardinals, his final major league team. However, it is important to note that currently, drug testing in baseball is conducted thoroughly and the so-called ‘steroid era’ is a thing of the past. Mark has also taken a step in the right direction by coming clean.