Do Retsuko and Haida Get Together?

‘Aggretsuko’ is a critically-acclaimed anime series that unsurprisingly has its origins in Japan. The show, in its original format, was a series of one hundred one-minute-long anime shorts that appeared on TBS Television in Japan between 2016 and 2018. For those unaware of this hilarious and sharp anime, it focuses on a feline office worker named Retsuko and her problems as she tries to navigate the often patriarchal and power-driven struggles of being a small-time worker in the corporate world. Full of funny and satirical observations on the hurdles of life, ‘Aggretsuko’ sees its protagonist Retsuko vent her frustration by singing death metal at the karaoke.

With the show’s popularity skyrocketing during this period, ‘Aggretsuko’ soon caught Netflix’s attention, and the streaming platform announced a multi-season original net animation (ONA) version of ‘Aggretsuko.’ Season 1 of the ‘Aggretsuko’ on Netflix premiered in April 2018, and to date, the critically-acclaimed anime show has seen three seasons being aired. Throughout these three seasons, fans of the show have grown to love the death metal-singing protagonist Retsuko. With Season 3 coming to an end now, the question on everyone’s mind is whether Retsuko ends up together with her colleague Haida. Here’s what we can tell you about it. 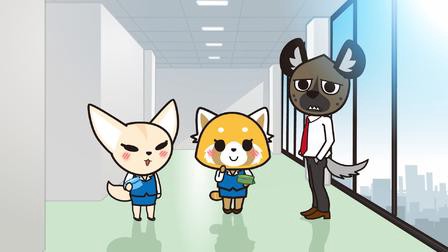 Haida is one of the supporting characters in ‘Aggretsuko’ and is Retsuko’s co-worker. However, Haida has a long-standing crush on Retsuko, and despite having failed in the past to ask her out, she still finds it challenging to get over his death metal-singing co-worker.

Throughout the past two seasons, we’ve seen Haida’s attempts to ask Retsuko out on a date end in catastrophic failure. However, one of the major subplots in Season 3 has been Haida’s relationship with Retsuko, and the Season 3 finale might have left many fans with the impression that Haida finally gets together with Retsuko.

Indeed, on the face of it, it might look like that. Here’s some context first. Despite Haida’s attempts to get over his feelings for Retsuko, he becomes convinced that they’re destined to be together after he finds out that they’re a perfect match on a dating app. Driven by his newfound conviction and confidence, Haida finally confronts Retsuko and tells her how he feels about her. Yet, Retsuko seems unmoved. She rightly points out that Haida has a very superficial understanding of her personality. Retsuko suggests that Haida projects his idea of her onto herself in a pushy sort of way, and she makes it clear that she’s not interested. But the story doesn’t end here.

Later, in real ‘Aggretsuko’ fashion, Haida expresses his frustrations with Retsuko in a death metal karaoke outburst and tells Retsuko again that he is willing to be there for her. It’s from here on out that we see Retsuko bordering on a change of heart. As if mirroring Haida from an earlier instance when he had asked her out for lunch, Retsuko tells Haida in the final moments of Season 3 that she would like to have lunch with him. Does this signal that Retsuko is willing to give Haida a chance? Here’s what we think.

With it having taken three seasons for Haida and Retsuko to get together, a chunk of Season 4 may be dedicated to their relationship. Whether it blooms into a healthy, supportive relationship or deteriorates into something that gives Retsuko more reason to go on her death metal outbursts is the question. Frankly, there’s no easy answer. Although many fans have been shipping Haida and Retsuko for a while now, ‘Aggretsuko’ is not a conventional show, and might not go for a traditional happily-ever-after story arc. So we’ll have to wait and see.