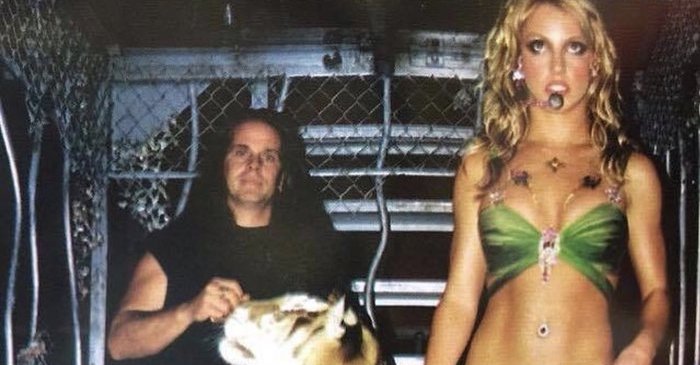 Netflix’s ‘Tiger King‘ has sent ripples around the world because the story itself is so wild. We have zookeepers and big cat owners, who seemingly run cult-like organizations, have nearly violent rivalries and are almost invariably larger than life. While the docuseries primarily focuses on Joe Exotic, there is no denying that Doc Antle has managed to attract a fair bit of attention as Joe’s mentor.

Some keen-eyed fans have also noticed that Doc Antle has shared the stage with Britney Spears. Notably, the pop star has recently become somewhat of a talking point herself, for sharing an Instagram post about wealth redistribution, which many have interpreted to be communist in nature. Curious to find out the circumstances under which the big cat owner ended up sharing a stage with the ‘Gimme Gimme’ singer? We have got you covered in that regard.

Bhagavan ‘Doc’ Antle appeared on the stage with Britney Spears at the 2001 MTV Video Music Awards. Britney belted out a memorable performance of “I’m A Slave 4 U”. Britney emerges from a rotating cage that contains Antle, and one of his ligers. A liger is a hybrid of a tiger mother and a lion father.

In the performance, Antle can be seen in the cage throughout, standing behind the big cat. Once Britney emerges from the cage, she proceeds to dance with a yellow Burmese python, draped around her shoulders. You can check out the performance below.

Antle has commented about this experience in a 2015 interview with Rolling Stone. He spoke of Spears, saying, “She was a golden child for that. She had to climb into a cage and dance with a big, adult tiger. Big adult tiger’s in there. It’s just an arms-width wide cage.”

He also added that only an extra fierce beast could hold its own next to Spears. Antle commented, “We’re in there, spinning around. Ten thousand people are screaming and dancing, and the tiger’s just Mr. Cool. A tiger that’s Mr. Cool like that is a big, macho, male tiger that believes he owns the world already, and he lets you be in it.”

You can check out Antle’s interview below.

Other Twitter users have taken to this theory as well. You can check out one of the tweets below.

can we talk about how carole baskin was sitting next to britney spears at the 2002 VMAs pic.twitter.com/JYYk7G0let

Notably, Big Cat Rescue, Baskin’s company, has shot this image down, denying that the woman in the leopard print is Baskin herself.

In conclusion, it is clear that Antle has not just worked in movies, as a zookeeper, and a big cat handler, but has also appeared on stage with big icons like Britney Spears. It comes as little surprise that Bhagavan ‘Doc’ Antle, is somewhat of a celebrity, even among his contemporaries.