You may come across actor Don Cheadle in many appearances at several places: as a campaigner to end the genocide in Darfur, Sudan, as the co-author of the book ‘Not on Our Watch,’ a co-founder of the NGO ‘Not on Our Watch Project,’ a BET Humanitarian award-winning activist, or as a Golden Globe-winning actor. The Missouri born actor discovered his passion at an early age. The rigorous teaching at the California Institute of the Arts during the early ’80s made him an admirer and expert of classic theater. Cheadle managed to get into small roles in TV soon after graduation. His first recurring role was in ‘The Golden Girls (1985-92),’ and its spin-off titled ‘The Golden Palace (1992-93).’

Movies like ‘A Lesson Before Dying (1993),’ ‘Devil in a Blue Dress (1995),’ and ‘Boogie Nights (1997)’ earned Cheadle the reputation of being one of the best character actors of his generation. While ‘Hotel Rwanda’ (2004) earned him an Academy Award nomination, ‘Crash’ (2004) landed him an Academy Award for Best Picture. His MCU character James Rhodes aka War Machine helped him to establish as an A-lister with a global fanbase. In 2012 Cheadle returned to TV with the comedy ‘House of Lies.’ At this point, the question that might be circling your mind is what is the next Don Cheadle movie or TV show? Well, the good news is that we have a clear answer to that question. Here’s the list of upcoming Don Cheadle films/TV shows scheduled to release in 2019 and 2020. We can only hope that the latest Don Cheadle movies would be as good as some of his recent ones. 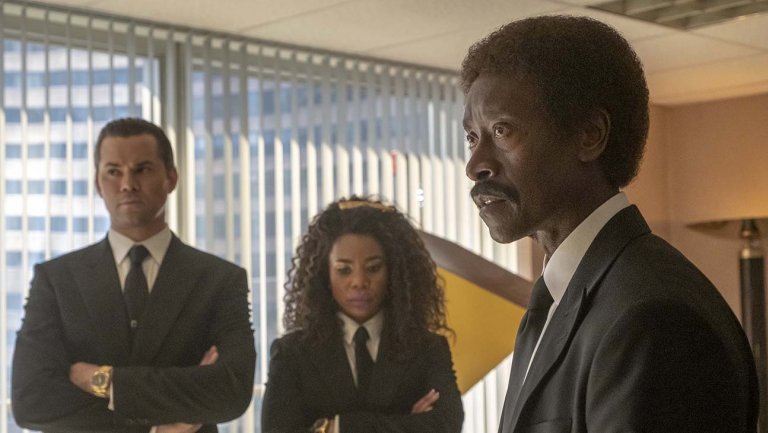 The Showtime comedy ‘Black Monday’ features the Wall Street event of the worst single-day stock market crash in the history of the U.S. The series explores the real-life event through the lives of the ruthless power trader Mo, played by Don Cheadle, his colleague and love interest Dawn, played by Regina Hall, and his protege Blair, played by Andrew Rannells. The trio forms a power triangle to exploit the circumstances before and after the infamous stock market crash on October 19, 1987. Paul Scheer also plays a key role in the series.

‘Black Monday‘ season 1 was hailed for its comedic take on the financial tragedy that shook the foundations of the global economy. ‘Black Monday,’ has wrapped up its successful first season while rumors about an upcoming second season still float around. Don Cheadle also serves as an executive producer of the show, which brings back the shock and surprise of traders and insiders with unexpected twists and turns. Showtime and the creator Jordan Cahan and David Caspe are yet to come up with an official confirmation for the premiere of season 2. 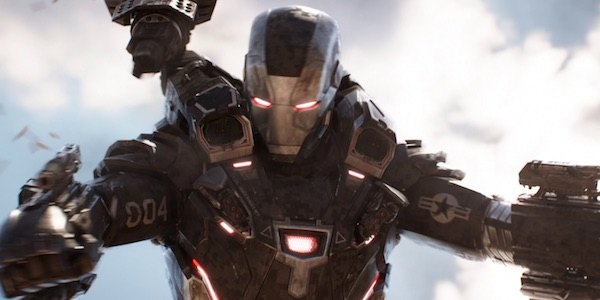 Don Cheadle’s armored Avenger, War Machine has a considerable fan following across the globe. Even though James Rhodes/Rhodey/War Machine is often sidelined in the MCU movies as an unimportant character, Iron Man’s best pal always leaves his mark as the most dependable one. As the Marvel Cinematic Universe reaches its grand finale with ‘Avengers: Endgame,’ fans clamor it’s high time the War Machine got his due. He is the peacemaker throughout the whole franchise and without him, Iron Man, the trouble maker, would have unleashed havoc. War Machine can have a bigger role in the upcoming flick. Avengers pick up the pieces after the last movie and they need someone like War Machine to put them together. Fans are eagerly waiting for their War Machine to survive at the end of the decisive battle and to return with his standalone project. ‘Avengers: Endgame’ reaches theaters on April 21, 2019.

‘Ratched’ is a long-awaited prequel to ‘One Flew Over The Cuckoo’s Nest.’ The Netflix series traces back from the starting point of the movie to tell the story of the infamous Nurse Ratched. The plot follows her transformation from a naive young nurse into a full-fledged monster in the movie. Sarah Paulson plays the titular Mildred Ratched while D’Onofrio portrays Governor George Wilburn. Other cast members include Sharon Stone, Corey Stoll and Hunter Parrish among many others. The show is produced and directed by Ryan Murphy, who made ‘Glee,’ ‘Scream Queens’ and ‘American Horror Story.’ Don Cheadle, Alexandra Englert and Annie Starke are also associated with ‘Ratched’ in what appear to be recurring guest roles. But no details of their characters are revealed yet. Netflix has given out Murphy an order for two seasons. The streaming platform has reportedly lined up the series for a 2020 release.

Even though ‘Run the Voodoo Down’ has been announced as Don Cheadle’s directorial debut, Peter D. Hutchison’s name is now attached to the project. Cheadle, apart from co-writing the script, produces and plays a cameo in the docudrama based on the life and music of the legendary jazz artist, Miles Davis. Other cast members associated with the project are Gary Clark Jr., Antonio Sanchez and Vince Wilburn Jr. The project has been in the development hell since 2017 and Cheadle is yet to announce the whereabouts of the movie. The latest reports suggest that ‘Run the Voodoo Down’ is a musical journey through not just one musician but the entire creative process of all artists.

‘Prince of Darkness’ is an interesting project in which Don Cheadle plays the lead role. The movie is a biopic based on the enigmatic life and death of the 19th century black millionaire, Jeremiah G. Hamilton. Reports suggest that the movie is an adaptation of the book ‘Prince of Darkness: The Story of Jeremiah G. Hamilton, Wall Street’s First Black Millionaire,’ written by Shane White. White’s book depicts Hamilton as a larger-than-life character with unnatural skills to amass money in a prejudiced economy of the predominantly white America during the second half of the 19th century. He defied the white business conventions and accumulated a fortune of $2 million before he died in 1875.

Despite being a colored man, Hamilton had a very strong business network within the white business world. During his reign, Hamilton married a white woman, owned a mansion in rural New Jersey, and bought stocks in railroad companies — things society wouldn’t allow a colored person to do at that time. By the time of his death, Hamilton was often referred to as the richest black man in the U.S. White’s book earned him the 2015 Society for Historians of the Early American Republic Best Book Prize and caught a place in the best seller list. Steven Baigelman, who is known as the co-writer of Cheadle’s directorial debut ‘Miles Ahead,’ adapted the screenplay for the movie.