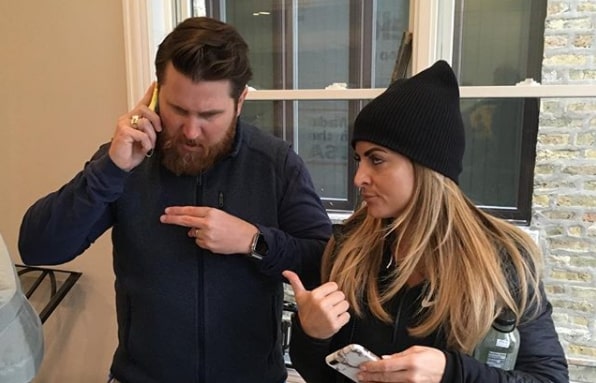 ‘Windy City Rehab‘ is a hit HGTV series, which has become quite popular due to the partnership between Alison Victoria (whose real name is Alison Gramenos) and Donovan Eckhardt. The former is the flipper, and the latter is the general contractor. At one time, Alison noted that Donovan was like her work husband, since she has the full-blown anger, and he has the anxiety. Whatever be the case, their chemistry is terrific on-screen. Here’s a picture of two of them at work.

Alison tans while I go orange. Either way, check us out soon! Tonight at 8pm CST on HGTV.

But, there is trouble in paradise as Alison and Donovan seem to have locked heads. The future of their partnership is at stake, but HGTV has gone ahead with a new season of ‘Windy City Rehab.’ Curious to know what went down between the two? We have the details right here.

Alison and Donovan’s friendship has come under fire ever since numerous Chicago residents started complaining about the quality of work they were putting in. There have been complaints that ‘Windy City Rehab’ has made blocks of Chicago look worse, and a lawsuit has only added to Alison and Donovan’s problems. James and Anna Morrissey have filed a lawsuit against Alison’s Alison Victoria Interiors Inc., Donovan’s Greymark Development Group, two related businesses, and Ermin Pajazetovic – the contractor.

After the Morrisseys moved into their $1.36 million home, flipped by Alison and Donovan, they started facing a slew of problems. The lawsuit alleges the couple dealt with a leaky roof and poorly installed windows, among other issues. As a result, they cited shoddy work, consumer fraud, and breaches of warranty and contract.

While Donovan hasn’t been very vocal about the issue, Alison has noted that she’s working with the Morrisseys to help them out of the predicament. The Morrisseys ultimately hired contractors on their own to fix the issue, and the deal was that Alison and Donovan would reimburse them. The situation between the pair seems to have become tenser with the former’s check clearing, but the latter’s bouncing. Reports suggest that Alison has offered to cover Donovan’s portion too because she is through with him messing with her life and business.

While this proves things are pretty much ruined between Alison and Donovan, some reports suggest that the two parted ways long before the lawsuit. It might come around at a time when Donovan’s license was temporarily suspended. Whatever be the case, Alison seems to be fed up with the partnership, and there doesn’t appear to be a chance of reconciliation.

Are Alison and Donovan Working Together?

It is clear that season 2 might very well be the last time you will see Alison and Donovan together in the same frame. Moreover, there are also reports that Alison has expressed an interest to untangle herself from this mess.

Hey loves! I appreciate all of your support over the last few days. I want you to hear it from me directly that I am working closely with the City of Chicago to repair and amend any and all permits with our new general contractors. The building department says they are pleased with our efforts and we will continue to work closely together to move in the right direction. Season 2 of Windy City Rehab is currently in production. I am in LA right now filming a special with @hgtv called #RocktheBlock, but I can’t wait to get back home to Chicago to continue building beautiful places and spaces for all of you to see in early 2020!

Around the time the rumors of the first split started circulating, Alison shared a lengthy post, which hinted at change. You can see it here. She mentions working with ‘new general contractors,’ which clearly indicates that she is looking to end any professional partnership with Donovan. While Alison and Donovan were great on television, discontent brewed under the surface. Now that it has burst forth, it is clear that Alison and Donovan won’t be working together for ‘Windy City Rehab.’

Read More: Best Netflix Do It Yourself Shows