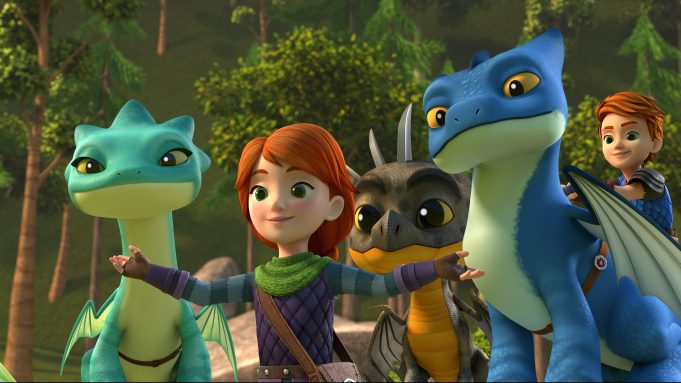 The DreamWorks Animation series ‘Dragons: Rescue Riders’ is the ultimate treat for fans of the super-hit franchise, ‘How to Train Your Dragon‘. This kid-friendly show airs on Netflix and is set in a fantasy world, similar to that on your favorite dragon movie. There are multiple racy adventures, action sequences, and an all-new set of dragon and Viking cast members.

Executive produced by Jack Thomas, who also features as the showrunner, ‘Dragons: Rescue Riders’ joined the list of dragon-themed animated shows, after ‘Dragons: Race to the Edge‘ and the Cartoon Network show, ‘Dragons’. Curated especially for preschoolers, the series is centered around two Viking twins and their five dragons.

The first season of the show was received well. Now, you must be wanting to know when Dragons Rescue Riders Season 2 will debut on Netflix. Read on!

Dragons: Rescue Riders Cast: Who is in it?

Voiceover artists for the dragons are Marsai Martin as Aggro, Noah Bentley as Burple, Andre Robinson as Cutter, Skai Jackson as Summer, and Zach Callison as Winger. All the main voice artists will return to reprise their characters in season 2.

Dragons: Rescue Riders Plot: What is it about?

After the ‘How to Train Your Dragon’ animated series concluded with its third film, the franchise continues to expand by adding new installments. You must already know about the animated cartoon, ‘Dragons’, that aired for eight seasons on both Netflix and Cartoon Network.

Joining this slate of dragon-themed programming is ‘Dragons: Rescue Riders’. It takes viewers to a faraway land, inhabited by ancient Vikings and fire-breathing creatures. Here, we meet twins Dak and Leyla, who were rescued as infants and raised by dragons, giving them the ability to learn and speak their language. Accompanied by the young dragons, Winger, Summer, Cutter, and Burple, the team defends their home in Huttsgalor and rescues other dragons.

Aimed toward a younger audience as compared to the previous ‘Dragons’ on Cartoon Network, ‘Rescue Riders’ is a CG animated comedy adventure series, based on the ‘How to Train Your Dragon’ books. The story is set in the same world as the former films and tv series. The events depicted on the show take place after those showcased on ‘Dragons: Race to the Edge’. The plot and characters in this title are completely new and there are no crossovers with ‘Race to the Edge’.

Season 2 will continue to follow the adventures of Dak and Leyla as they team up with their scaly, fire-breathing friends with an aim to protect other dragons while defending their home of Huttsgalor.

Dragons: Rescue Riders Season 2 Release Date: When will it premiere?

‘Dragons: Rescue Riders’ season 1 premiered on Netflix on September 27, 2019. All of its 14, half-hour episodes landed on the platform on the same date. The show was yet another addition to the streaming giant’s seven new original preschool series, launched in 2019.

Soon after the first season’s conclusion, Netflix renewed the show for another installment. Considering how popular the Dragon series is, we were not surprised to hear this piece of news. ‘Dragons: Rescue Riders’ season 2 is slated to premiere on February 7, 2020. It will consist of 12 episodes.

Melissa Cobb, vice president of original animation at Netflix, stated the importance of adding kid-centric titles to the platform on the streamer’s press release, stating, “With high-quality, age-appropriate programming for kids at every age and stage, we want to help young people find and connect with the stories and characters they love on Netflix.” She further added, “We are also here to empower parents to find the shows that are just right for their families during whatever time they feel is appropriate to enjoy entertainment.”

Other shows which already air on the platform and are directed towards this category of viewers include ‘Ask the StoryBots‘, ‘Chip and Potato‘, ‘Mighty Little Bheem‘, ‘Motown Magic‘, ‘Super Monsters’, ‘True and the Rainbow Kingdom‘, ‘Word Party’ and ‘YooHoo to the Rescue’. You can stream the content on Netflix Kids, a section of Netflix curated only for the younger viewers.