All You Need to Know About Dude Perfect: Backstage Pass 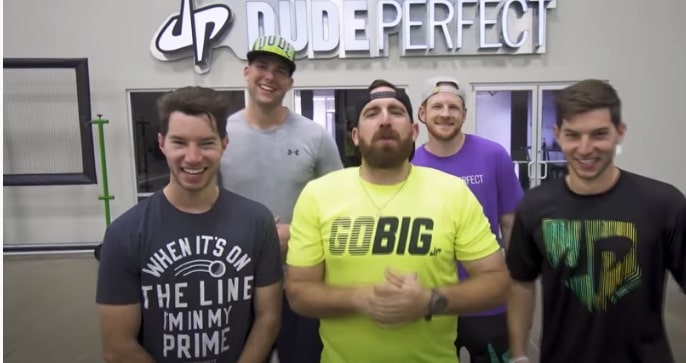 Dude Perfect is an American multinational sports entertainment conglomerate in Frisco, Texas. The group is also famous for its YouTube content, which includes trick shots and stunts put together, along with upbeat music. Their channel of the same name enjoys a massive fan following and is estimated to be nearly worth $20 million. Now, ‘Dude Perfect: Backstage Pass,’ promises to take us behind the scenes and explore the motivations of the content creators and what their journey has been like. Curious to know what the documentary is all about? We have the latest news and updates right here.

‘Dude Perfect: Backstage Pass’ is slated to release on May 11, 2020, at 3 am ET. You can check out the tweet from Dude Perfect’s Twitter handle, asking fans to save the date.

‘Dude Perfect: Backstage Pass’ is a YouTube Original. As a result, you can stream it for free on the platform. Notably, Dude Perfect, the YouTube channel will have the documentary. Check it out here.

Other members we expect to see are Cory and Coby Cotton. The identical twins are co-founding members, and Coby is a shooter for the group. Cody Jones or the ‘Tall Guy’ is also a fellow shooter and a member of the group who’s likely to make an appearance in ‘Dude Perfect: Backstage Pass.’

What is Dude Perfect: Backstage Pass About?

‘Dude Perfect: Backstage Pass’ gives us access to the lives of the members as they go on the Pound It, Noggin tour in 2019. We will learn the humble beginnings of the group from being friends at the Texas A&M University to going on their first-ever live tour. Tyler speaks of the experience, saying that it reminds him of college since the five of them live together on a bus. After all, the entire concept of Dude Perfect was started by them being roommates in college.

Apart from the look at the fun-filled tour and their rise to popularity, the documentary also gives us glimpses of the stressful life that content creators have to deal with in their attempt to remain relevant. Coby admits that each of them came very close to quitting at different points of their lives, but when they show up to work, they see four friends waiting for them. Dude Perfect is their chance to do something meaningful, and the documentary captures the spirit and motivations of the founding members. We expect to be regaled with some high-octane sequences like go-carting and making impossible trick shots.

You can check out the trailer for ‘Dude Perfect: Backstage Pass’ to get an idea of the topics the documentary will cover.