Review: Earth and Blood is a Dry Thriller 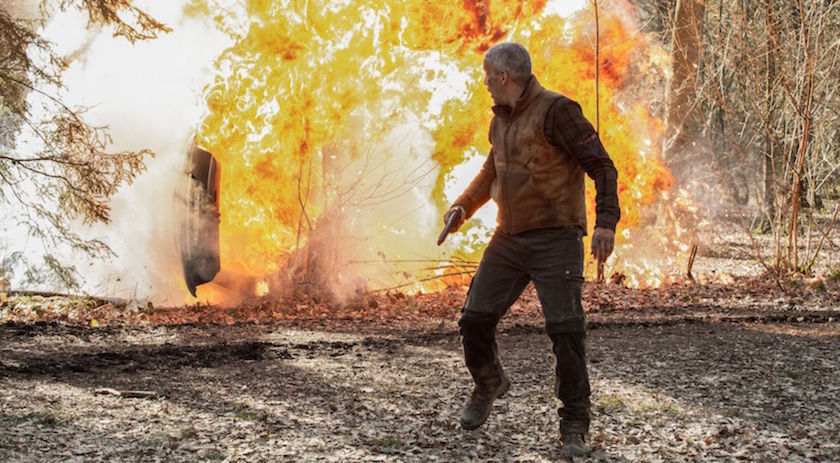 One thing that Netflix has managed to be successful at is the globalization of movies and television series. The streaming platform hosts content of every major language. Its Spanish (‘Money Heist‘) and German (‘Dark’) shows have been extremely popular while K-dramas on the platform have struck a cult-like chord. Bollywood movies have resulted in high, regional viewership. French movies like ‘Earth and Blood’ add to this diversity.

Titled ‘La Terre et le Sang’ in French, the thriller is helmed by the experienced director, Julien Leclercq, and boasts of a promising premise. An atmospheric film, ‘Earth and Blood’ stars Sammy Bouajila in the lead role.

‘Earth and Blood’ begins with a group of goons robbing a police station for a consignment of cocaine. Followed by that, a man named Saïd gets an MRI. The doctor tells him that he has bronchogenic carcinoma. Saïd owns a sawmill and has had a rough winter. He is running out of money and decides to sell the sawmill. Saïd has a deaf and dumb daughter named Sarah.

On the other hand, Yanis works at Saïd’s sawmill and is on parole. His half-brother coerces him to exchange his car with Saïd’s. The half-brother hides the stolen cocaine in the car, which Yanis keeps in the sawmill. Saïdgets suspicious and forces Yanis to show him what he has been hiding in the car. Soon, the drug lord, Adama, who owns the cocaine (not Yanis’ half-brother), arrives at the sawmill with massive firepower to get his stash back.

The rest of the movie functions like one long, action sequence. Yanis calls the police, but they can only come after twenty minutes. Saïd makes Yanis and Sarah leave the factory. One of the goons spots them and follows the two in a car. Saïd knows the sawmill inside-out and uses that to his advantage in fighting off the remaining goons.

Yanis gets stabbed in the abdomen by the goon that had been following him and Sarah. Sarah manages to run to another sawmill worker’s house. Saïd reaches Yanis and kills the goon. However, Adama reaches them.  One of his bullets hits Saïd’s abdomen. Saïd pretends to be dying. Adama tells him that he is going to kill Sarah and reaches the house that she is in.

Sarah jumps out of a window on the first story. However, Adama manages to corner her. Instead of shooting Sarah, he puts his hands on her head, preparing to snap her neck. Saïd attacks Adama with an ax, saving Sarah. He struggles with a gunshot wound from earlier while Sarah hugs him and the police helicopter circles above…

‘Earth and Blood’ turns out to be a dry, unimpactful thriller with nothing for viewers to cheer for. The movie begins well, establishing the characters quickly. The police robbery scene at the start does seem to signal edge-of-the-seat action. However, it goes downhill from there.

The premise, although generic, is one that packs a ton of promise. The idea of a dying father trying to save his daughter from a bunch of dangerous goons in a siege-like situation could have been exploited much more. However, the action sequence at the end falls surprisingly flat. There isn’t a single moment that warrants an air punch or even a minor shriek. In fact, the tension is quickly lost. The stakes just do not seem high enough, and that alludes to the movie’s problem of execution, not one of plot.

The cinematography is decent, with a few well-realized frames. However, the dark atmosphere makes for tough viewing, similar to the ‘Game of Thrones‘ episode, ‘The Long Night.’ So, crank up your brightness before watching ‘Earth and Blood,’ but that won’t save you from a dull hour and a third.