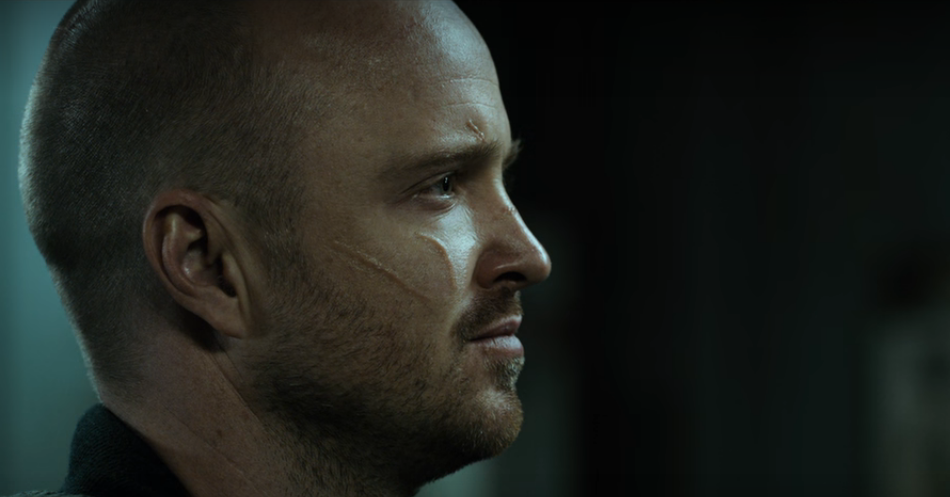 Vince Gilligan has created an incredibly intricate and impactful universe with ‘Breaking Bad‘. We first saw Walter White, a high school chemistry teacher, and his former student, Jesse Pinkman, break bad as they began to cook the purest meth buyers had seen. Since then, over the seasons, the two managed to establish the largest meth empire in the United States and ‘Breaking Bad’ came to a violent conclusion with the kingpin dying and his partner finally freed from the shackles of a life of crime.

At the same time, ‘Felina’, the masterful final episode of the series, ended on a somewhat ambiguous note. Jesse had been freed from all who sought to control him, including the devil-like figure of Walter White. It is evident in Jesse’s expression that he is processing trauma, as we see him breaking out in laughter and sobbing as he drives away in a Chevrolet El Camino.

However, Jesse is not going away into the sunset to lead a happy life. The discerning viewer will easily understand that the troubles are far from over for the youngster, who now has to escape town, running away not only from the law enforcement officials but also from various criminal elements that Walt and he were associated with. ‘El Camino’ is the tale of Jesse’s escape to freedom, and Gilligan ends the movie on a similar note of Jesse driving away. However, what does this mean for the character we have come to like so much over the seasons? Let’s break down the film and its ending.

Despite a bleak outlook, Gilligan does not lose his humor which is what we see when Jesse hits up his old friends, Skinny Pete and Badger, while he is on the run from the law. In their chaotic way, the two friends try and help him cover his tracks and make an escape. He ditches the conspicuous El Camino for a car no one would suspect an outlaw to be riding. Through flashbacks, we get to see more of Jesse’s trauma, as his relationship with his captor, Todd, becomes clearer. Jesse helps Todd cover up a murder, but in the course of the events, he finds out that Todd stashes a lot of money in an apartment of his. On the run, and desperately in need of cash, this is where Jesse makes his first stop.

However, the mild-mannered but oddly violent Neo-Nazi proves to be wily for Jesse. Pinkman spends a lot of time trying to figure out where the money might be, turning the apartment upside down. When he finally chances upon the stash, the timing is terrible as two cops arrive on the scene, presumably to follow up on the investigation. A tense sequence unfurls as Jesse takes one of the cops hostages, but the other cop convinces him that he is surrounded and he should give himself up. This turns out to be a big mistake because the duo happens to be fake cops who are merely looking for the money.

However, Pinkman happens to have some leverage as he knows where the money is hidden and he spares them the trouble of having to look for it. In return, one of the fake cops promises to let him go and also splits the money among the three of them. Just as Jesse is about to leave, he notices the fake cop getting into a truck labeled Kandy Welding, which sparks some memory. As the film unfurls, the connection becomes clear. We see that the Neo-Nazis employed Kandy Welding to make the contraption that would allow Jesse to be chained while he cooked meth for them. In fact, we see Jesse reduced to an object, as he is treated like an animal for fun by a Neo-Nazi and a member of Kandy Welding, who put bets on him.

The more the movie progresses, the sorrier we feel for Jesse. He is completely isolated in the world, with even his parents urging him to turn himself in. Jesse makes a final attempt at using Saul’s contact, who could set him up with a new identity and help him disappear. But since he lacks sufficient funds, the man refuses to make a concession to the pleading Jesse.

With flight no longer an option, Jesse has to stay and fight, and hereon he begins to become more of an action hero. However, somewhere deep within, Jesse is still the boy who looks for shortcuts. He tries to take money from his parents by getting them out of the house, but he finds two guns there, instead. Armed, Jesse decides to confront the people at Kandy Welding. This results in a violent scene, where Jesse’s action hero persona is more evident than ever as he engages in a good old fashioned duel. The next few sequences are filled with explosive action as Gilligan gives the fans exactly what they want. We see Jesse recover all of Todd’s money and he is rich enough to afford a new identity now.

He chooses to go to Alaska, which an earlier scene in the movie had explored in a flashback. We saw Mike (Walter’s meth empire’s muscle) telling Jesse that Alaska was a great place to start afresh although he warned the young man that he could not make things right. Jesse takes Mike’s words to heart and chooses to make a new life for himself. He manages to send out his final goodbyes to the people in his life he cares about. The movie ends with Jesse finally managing to escape his old life, determined to live his new one in a better manner.

What Happens to Jesse Pinkman in El Camino?

Jesse Pinkman is undoubtedly the protagonist of ‘El Camino’ and the entire movie tells his story. So what happens to him in the film? Well, while ‘Breaking Bad’ hinted at the beginning of Jesse’s escape to freedom, ‘El Camino’ sees it to its natural conclusion. While Jesse is still very much the same character we fell in love with, in the original show, he is infinitely more mature in the film. The signature enunciation of ‘bitch’, or many of the colloquialisms that we have come to associate with Jesse Pinkman is missing in the movie. Instead, they have been replaced by quiet desperation as Pinkman attempts to rely on his wit, determination, and resourcefulness to survive. His trauma is increasingly clear and bursts forth through many of the flashbacks that the film offers.

While Jesse does tackle life more hesitantly, the continuity of character is evident from the series into the movie, as we see his rising existential terror in the attempts he takes to assert his freedom. Jesse Pinkman is finally rudderless in ‘El Camino’. He has no one to turn to, not the psychotic criminal elements who tried to control him like Walter, Gus Fring or Todd, or the misguided and morally compromised characters like Mike and Saul, who tried to help him in their own way.

In the absence of guidance, Jesse perhaps finds himself. He fights tooth and nail to make a new life for himself and that is where we last see Jesse Pinkman in ‘El Camino’. Renamed Mr. Dirscoll, Jesse perhaps cannot make anything right in his old life, but he has a chance to do it right thanks to the fresh start he gets. With his money and the lessons he has learned, we can imagine him to finally find some peace and quiet, and perhaps even be happy. 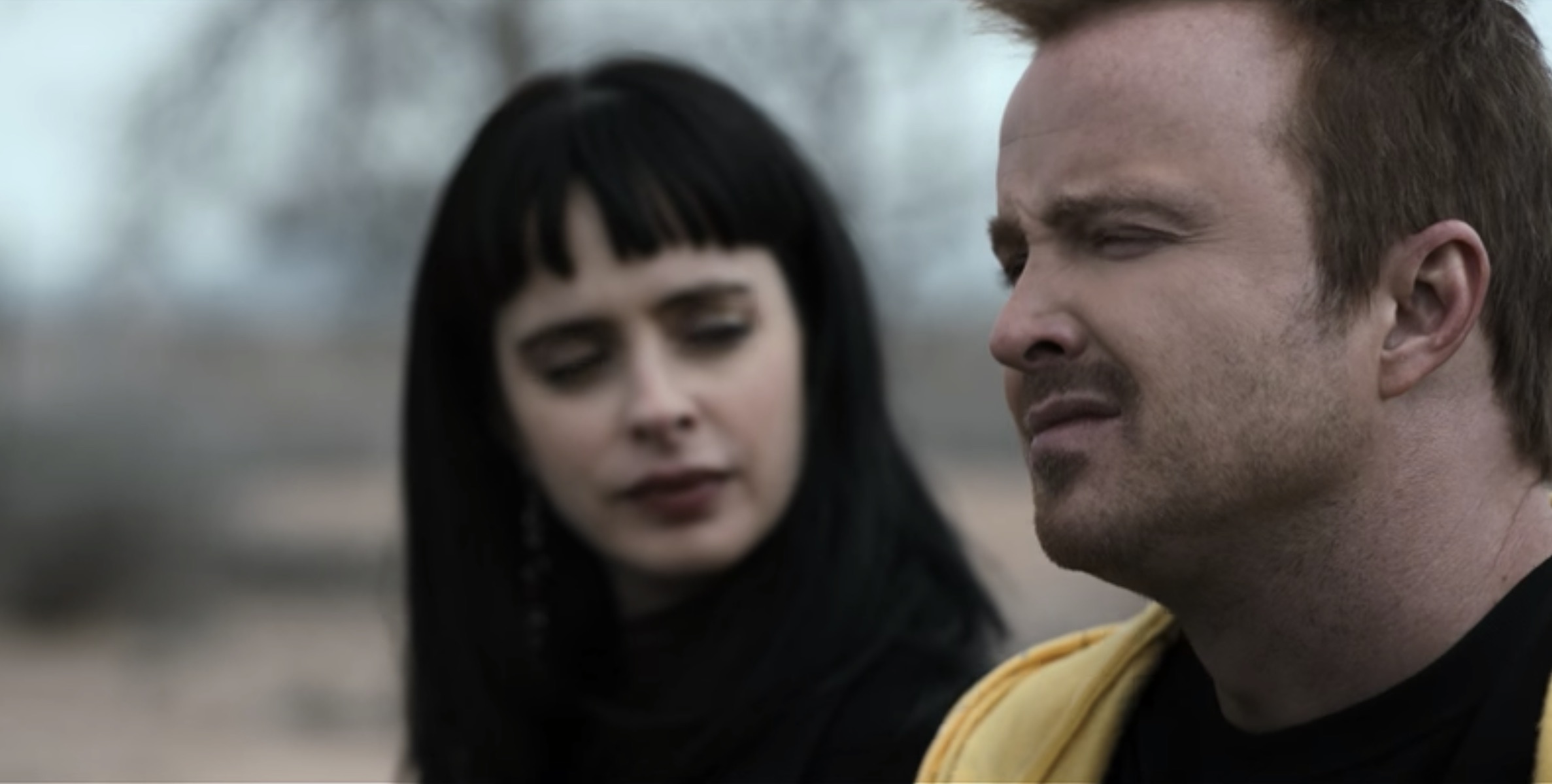 If you have seen ‘Breaking Bad’, Walter’s attempted escape to a new life is strikingly similar to Jesse’s escape to Alaska. However, while Walt wished to go back to his old life, his family and his meth empire, Jesse is more than happy to escape the travesty of his former life. He has one final goodbye letter to send out, which he does. Then he goes on his way to his new life as Mr. Driscoll in Alaska. As Jesse drives away, he recalls a conversation with his first love, Jane. He used to think that Jane’s philosophy of going where the universe took her was cool, but Jane disproves it, saying that it is better to have control over one’s life. This is evidently something Jesse personally understands at this point.

Gilligan’s attention to detail must be lauded here as ‘El Camino’ closes with another shot of Jesse’s face, much like in the concluding moments of ‘Breaking Bad’. However, all the hysteria and many emotions are missing in the final moments of the movie. Instead, there is silence, a smile on Jesse’s face, as he is finally at peace with himself and we can even believe that somewhere down the line Jesse has a shot at happiness in his new life. ‘El Camino’ drives home all that he has been through and becomes a film where the audience hopes along with Jesse that his past stays behind and he has something to look forward to.