Do Elena and Damon End Up Together in Vampire Diaries?

The CW’s teen vampire show, ‘The Vampire Diaries,’ premiered in 2009, and after eight seasons and over 170 episodes, came to an end in 2017. Throughout its eight-year-long journey, the show managed to become one of the most successful shows on The CW network, and even today has a massive fan following. Apart from all the regular vampire shenanigans, the most significant selling point of ‘The Vampire Diaries’ became the complicated love triangle between three of its main characters – Elena Gilbert (played by Nina Dobrev), Stefan Salvatore (played by Paul Wesley), and Stefan’s somewhat malevolent older brother Damon Salvatore (played by Ian Somerhalder).

Indeed, the love triangle among the three has given rise to much debate and discussion within the fandom of ‘The Vampire Diaries,’ and many still ask the question of whether Elena finally ended up with Damon. In this article, we tell you all we know about Elena and Damon’s relationship.

Do Elena and Damon End Up Together? 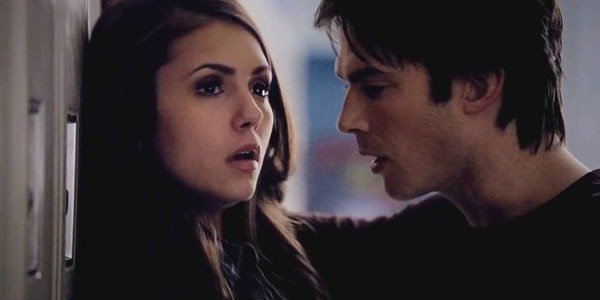 In the early days of the series, Elena and Damon started on the wrong foot – at that time, Elena, having lost both her parents in a car crash, was passionately in love with Damon’s younger brother, Stefan. However, Elena and Stefan’s relationship soon became complicated with the return of the mysterious Damon.

Damon’s return to the town of Mystic Falls, where the events of the show take place, had everyone believing that he was the villain of the show. And who could blame them? Initially, Damon did come off as a malevolent, narcissistic, and evil vampire who had nothing but contempt for his affectionate and caring brother Stefan. Out for revenge on Stefan, Damon’s return complicated Elena’s relationship with Stefan, and as a result, Elena and Damon’s first relationship is characterized by antagonism.

However, throughout the show, as the characters developed, their relationship started to display increasingly complex and exciting dynamics. While most people actively avoided Damon in the town for his malevolent and vicious tendencies, Elena was among the few who had little to no fear of Damon and wasn’t afraid to call him out for his petty, narcissistic behavior. These clashes between Elena and Damon led Elena to see a side to him, which most people didn’t understand, and Elena started to become convinced that Damon wasn’t entirely evil.

Elena’s changing perception of Damon matured over the seasons of the show, and the two went from being enemies to allies, to best friends, and eventually lovers. Their maturing relationship had a symbiotic aspect to it – while Damon was regularly saving Elena from danger, Elena was always saving Damon from his dark, inner-self. However, due to Stefan’s presence in the show, and the already existing dynamic between Elena and Stefan, Elena and Damon could not be together without complications.

This, however, got resolved in the explosive finale of Season 8 when Stefan sacrificed himself to save Damon, Elena, and the town of Mystic Falls. The characteristic flash-forwards of the series tells us that, following Stefan’s sacrifice, Elena and Damon got reunited, married each other, and both had a long life with each other before they found death and eternal peace in the afterlife.

So, Elena and Damon did end up together in ‘The Vampire Diaries,’ and they are loved couple in the fandom where they are popularly known as “Delena.” In ‘Legacies,’ the couple’s life together is referenced again when we learn that Damon has been generous to the school, but he and Elena have their children to worry about. Furthermore, the series even introduces Stefanie Salvatore, Damon’s daughter. Thus, it is evident that Delena did have a happy life and started their family.