Where to Stream Escape Room? 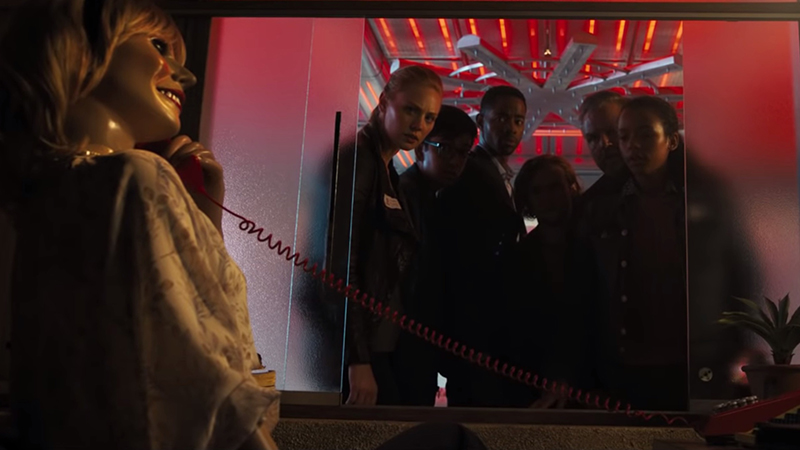 How terrifying can a game get? Can you be trapped in an endless game with a sadistic game-master? No, we are not talking about the ‘Saw‘ series, but about the 2019 movie, ‘Escape Room’. This psychological horror and mystery film takes the menace of games to the next level. Sure, a game or a puzzle can be fun, but not when your life is on the line, and definitely not when it has been organized by a sadistic individual who is out to kill you. ‘Escape Room’, upon its release, was met with praise for the performances from the cast members and the atmosphere of fear that it creates.

There is also a sequel in the works, which is slated to release in 2020. This makes it the perfect time to watch ‘Escape Room’ if you have not seen it, or to re-watch it in case you have. Either way, before we tell you where to watch the movie, let us walk you through the plot of ‘Escape Room’.

What is Escape Room About?

‘Escape Room’ is a story of six people from six different backgrounds. We have a physics student, Zoey (Taylor Russell), Jason (Jay Ellis), a wealthy day trader, Ben (Logan Miller), a stockboy, Mike (Tyler Labine), a truck driver, Amanda (Deborah Ann Woll), an Iraq War veteran, and Danny (Nik Dodani), an escape room enthusiast. They are all presented with a puzzle cube, and upon solving it, are invited to an escape room with a $10,000 cash prize.

When the participants gather in the office block, they wait for the Game Master to arrive, but no one seems to be forthcoming. Ben tries to leave but finds that the door handle falls off, leading them to believe that the game is afoot. They soon realize that the room is an oven and the temperatures keep rising. Luckily for them, they find an escape passageway and get out before the room becomes filled with fire. The next room that they enter is radically opposite, insofar it is an icy room where the temperatures keep on falling.

Ben ultimately finds the key but not before Danny falls through the ice and drowns. Moreover, players begin to notice specific pointers that indicate their past traumas, like a song Ben heard before almost dying in a car crash, or a red coat that Jason wore while he survived a shipwreck. Anyway, the others make their way to an upside-down billiards room. They realize that this room is a sliding puzzle and a missing 8 Ball happens to be the key. Amanda finds it and tosses it to the others, before falling to the shaft below and dying.

The room that comes next is a hospital ward with six beds for the six players. At this point, it is revealed that these six were sole survivors of accidents — Mike escaped from a mine cave-in; Zoey managed to survive a plane crash; Danny survived even when his family died of carbon monoxide poisoning; and Amanda managed to survive an IED blast. Zoey also realizes that the game is to see which of them is the luckiest. Meanwhile, Jason realizes that the room will be filled with poison gas. Zoey refuses to continue and destroys the room’s cameras. However, they get a clue that the heart rates of the players hold the answer to escaping. Since Mike has the highest heartrate, the plan is to use the defibrillator on him. When Jason does so, Mike dies, but when Jason does it to himself, he is able to solve the mystery of the room and Ben and he escapes. Zoey refuses to play along, allowing the gas to envelop her.

The next room is filled with strobe lights and optical illusions. Both players are drugged with a hallucinogen and have to fight for a single antidote. Ben kills Jason and uses it, crashing into the next room, where the walls rush to crush him. He escapes this too, finally meeting the Game Master. In the meanwhile, employees enter wearing hazmat suits to dispose of the bodies, but we see Zoey emerge from the poison gas and attack them. The Game Master explains to Ben how the people are lured to play the game; people who have something in common. Several rich people like celebrities bet on their survival. It is a kind of spectator sport. He then tries to kill Ben, but Zoey and Ben manage to eliminate the Game Master.

As the movie ends, we see that Ben is recovering, while Zoey is nowhere close to having accepted that the elaborate plan is over. She is determined to prove it to the authorities, but no one believes her or Ben, and those who organized it are careful in covering up their tracks. She also realizes that the game is not over, because one of the walls had mentioned ‘Wootan Yu’ earlier, which is actually an anagram for ‘No Way Out’. Following the clues, Zoey hits upon an unlisted building in Washington and convinces Ben to go with her. However, we see that the Puzzle Maker, the designer of the game, has plans to make their flight a deadly survival game. Probably this will be taken up in the sequel to ‘Escape Room’, but for now, let us tell you where to watch it.

Is Escape Room on Netflix?

Netflix has an amazing collection of films and television shows. Though ‘Escape Room’ is not on the platform, if you are in the mood for psychological thrillers, we recommend that you check out ‘Gerald’s Game‘.

Is Escape Room on Hulu?

Hulu keeps adding content to their expanding collection, in order to have an edge over the competitors. ‘Escape Room’ might not be available on the platform, but if you want to experience that atmosphere of fear again, check out ‘Castle Rock‘, which is based on Stephen King’s universe.

Is Escape Room on Amazon Prime?

Amazon Prime has a collection of films and television shows that cannot be easily bested. While ‘Escape Room’ is not available to subscribers as is, you can rent or buy the movie and watch it on the platform. It costs $5.99 to rent and $14.99 to buy the movie. Check it out here.

Where Can I Stream Escape Room Online?

If you want to stream and watch ‘Escape Room’ elsewhere, online, that is totally understandable too. Just head to YouTube, Vudu or FandangoNow and you can catch the movie there. YouTube lets you rent it for $5.99 and buy it for $14.99, for the Ultra HD version. Vudu and FandangoNow have three variants – the SD, HD and Ultra HD. Renting costs $4.99, $5.99 or $7.99 for the respective versions. All versions can be purchased for $14.99. Thus, if you want to rent it, we recommend you go to YouTube or buy it from any of the sites.

Is Escape Room Out on DVD and BluRay?

Yes, ‘Escape Room’ is out on DVD and BluRay and has been available since April 23, 2019. You can check it out here.

Where Can I Watch Escape Room Online For Free?

Unfortunately, at this moment, there is no option that allows you to watch ‘Escape Room’ for free. I hate to let down the freeloaders, but you have to wait until the movie is out on a platform that allows free trial periods.

However, we urge all readers to pay for any art they consume.

Where To Stream Train To Busan Presents: Peninsula?