‘Escaping the Madhouse: The Nellie Bly Story’: All the Details You Need to Know

Lifetime’s ‘Escaping the Madhouse: The Nellie Bly Story’ is a well-crafted psychological thriller that is inspired by the endeavors of Elizabeth Cochran Seaman, who published under the name Nellie Bly. Seaman was an intrepid investigative journalist, and an activist responsible for changing our perception of mental health, especially the mental health of women.

She managed to do this by getting herself locked up in an insane asylum, in order to document the conditions and treatment processes in the place. The film depicts Bly’s stay there, and the horrors she faces inside, which ultimately leads her to question whether she truly belongs in the asylum.

The story of ‘Escaping the Madhouse’ is actually set in the insane asylum on Blackwell’s Island in New York’s East River. A short distance from Manhattan, this island is now known as Roosevelt Island. However, you can understand the logistical difficulties that arise from filming in Manhattan, especially if one is making a period piece.

Keeping that in mind, the production crews have smartly moved to Winnipeg, Canada, for filming. The historic site at the intersection of the Red and Assiniboine rivers happens to be the capital of Manitoba. Ricci commented on filming in Winnipeg, saying that the shoot lasted less than five weeks, but it was less than 12 degrees every day, which made things a bit unpleasant. Karen Moncrieff, the director of the movie, is inclined to agree with Ricci. You can check out her post about filming in Winnipeg, below.

#TheNellieBlyStory @lifetimetv @LifetimeTV_PR
Lensed by the amazing @lucmontpellier ! I miss you, but I do not miss winter in Winnipeg!!! pic.twitter.com/1rmNAWARCw

Naturally, the snow and cold manage to give the movie an authentic aura, where the chilling tale of what happens inside the asylum is almost mirrored by the weather outside. You can check out another tweet, confirming that the filming has taken place in Manitoba itself. It benefits the production crews, additionally, because of the monetary perks of filming in Canada.

Escaping the Madhouse: The Nellie Bly story starring Judith Light and Christina Ricci filmed in Manitoba will be airing in Canada March 10th on Lifetime Canada at 8pm!! Fun working on this. The Director Karen Montcrieff was great! #manitoba #film #judithlight #christinaricci pic.twitter.com/cCJhtmtIj8

In conclusion, Manitoba stands in for Manhattan in Lifetime’s ‘Escaping the Madhouse’. However, great care has been taken to ensure that asylum is accurately portrayed so that we become immersed in the sense of horror that permeates every aspect of Nellie Bly’s story. 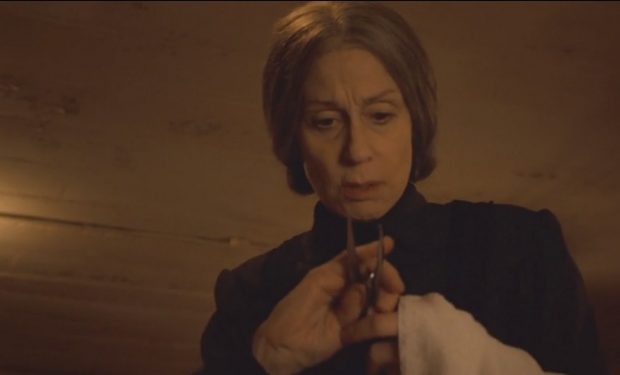 Ricci, born in Santa Monica, California, used to be an outspoken starlet in the 1990s. She has had a successful career since then with Golden Globe and Emmy nominations. She has appeared alongside the likes of Johnny Depp, in ‘Fear and Loathing in Las Vegas‘. Ricci has also appeared in shows like ‘Saving Grace’.

In the movie, she plays the part of Nellie Bly, the courageous activist, and reporter, who gets herself locked up in an insane asylum. Despite being subjected to torture, Nellie’s expose ultimately went on to help women all around the world, when it comes to mental health issues. You can check out Ricci’s post below.

Judith Light started on the stage, before transitioning to television shows. She has appeared in several notable series over her long and illustrious career. However, her part in ‘Transparent‘ has earned her widespread recognition, along with Golden Globe, Primetime Emmy, and Critics’ Choice Television Award nominations. Light can also be seen in Netflix’s ‘The Politician‘.

In Lifetime’s movie, Light appears in the role of Matron Grady, the head nurse who tortures patients, forcing them to submit. When Grady encounters Nellie’s indomitable spirit, the brutality only increases. Finally, we have England-born Josh Bowman, who is known for parts in ‘Revenge’ and ‘Time After Time‘. Bowman appears in the role of Dr. Josiah, who takes note of Nellie’s troubles, and genuinely tries to help her.