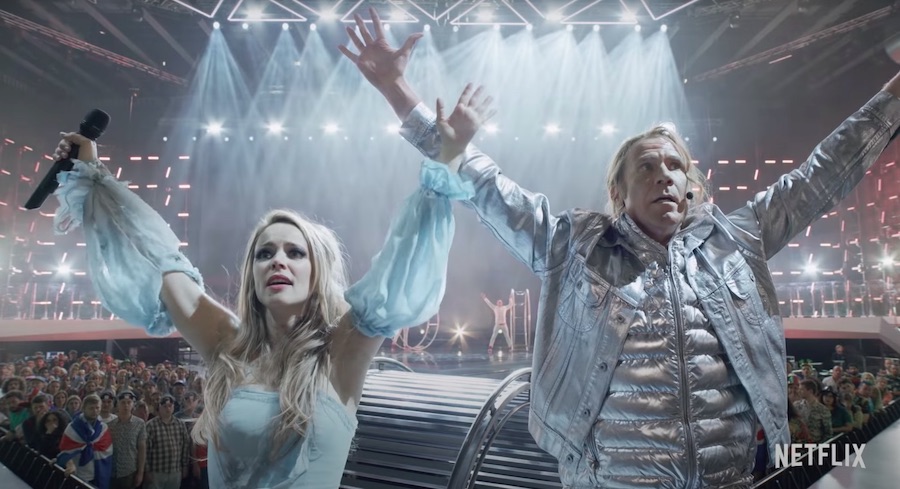 ‘Eurovision Song Contest: The Story of Fire Saga’ follows the life of childhood friends, Lars and Sigrit. Growing up in a small Icelandic town, they have only one dream: to win the Eurovision Song Contest. However, their dedication is not appreciated by the rest of the town. Lars, especially, feels the brunt of it as his father becomes bitter towards him due to his love for music. They finally get a chance to prove themselves when they somehow find a way into the contest.

As they follow their dreams, they also face various challenges and eventually accept the things that are more important in life. Their journey is full of colors and music and makes us wonder if someone can really have a life like this. Is the film based on real events? Here’s the answer.

Is Eurovision Song Contest based on a true story?

No, ‘Eurovision Song Contest’ is not based on a true story. It is based on an original screenplay by Will Ferrell and Andrew Steele. While the characters and the storyline of the film are fictional, the movie centers around a very real music contest that takes place in Europe.

Eurovision Song Contest (read more about it here)is one of the biggest international music contests and has over fifty participant countries. Each country has to send in one original song as its entry, which is then performed live for the audience. The results are decided through voting, where a country cannot vote for itself. The contest has been around since 1956, and has boosted the careers of its winners, most notable of them are ABBA and Celine Dion.

Ferrell first came across the contest in the late 90s through his wife Viveca Paulin, who is of Swedish descent. He fell in love with the concept and the presentation of the show and the idea to make a movie about it took hold in his mind. He eventually came around to it in 2018 and attended the contest in Lisbon, and next year in Tel Aviv, to research for the film. David Dobkin was brought on board to direct the film, who jumped into the research by pouring through the finale performances of the show. One thing that they were clear about was that it was not going to be a parody. The contest is already flamboyant and surprising enough to be entertaining on its own. It is also loved by a lot of people, and the filmmakers didn’t want to make fun of it.

While attending the contest in Tel Aviv, Dobkin shot the reactions of the live performances because he knew he wouldn’t be able to recreate it, due to the unpredictable nature of the show. They also studied the production techniques of the show, taking inspiration from the innovative stage outfits, the design of the stage, and the choreography of the performances. If you think there are things in the movie that might have been exaggerated to make them look comical, they aren’t. Eurovision is too wild in itself to have anything imagined for it.