‘Ex Machina’: What Does it Really Mean to be Human? 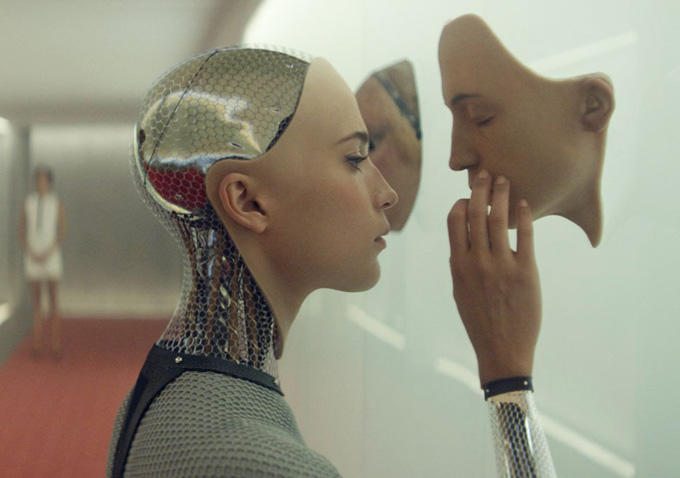 Even as I am writing this, I am thinking of words to start off this appreciation. How to define ‘Ex Machina’? It is most definitely science fiction – the title shouts the fact out. Even the posters. But the film itself effortlessly toys with themes we’ve already seen and known. It toys with them and then throws them out of the window.

There is a noir-ish tone throughout the movie; a kind of journey for the mind and the senses. Cerebral filmmakers like the legendary Fritz Lang and David Lynch would feel right at home.

The narrative seems simple, but it really isn’t. Caleb [Domhnall Gleeson] is a talented programmer working for Bluebook – world’s most famous search engine. He wins an online lottery-cum-competition to spend a week with the company’s eccentric CEO Nathan [Oscar Isaac]. Surprised and elated, Caleb visits Nathan, who lives in a secluded home somewhere in the mountains.

On meeting Nathan, Caleb learns that there is something else going on beneath the facade of the cool, detached but friendly businessman. Nathan is given a sort of choice – to spend the week hanging out and getting drunk or become part of something else. It is revealed that Caleb is working on constructing an A.I. He has invited Caleb to conduct the well known Turing Test to know if the A.I is ready. Caleb takes the red pill, of course. One may not notice, but thematically, this presents the same choice Neo had to make in The Matrix. It speaks a lot about the inherent curiosity in any individual, and lure of the unknown.

Caleb meets Ava [Alicia Vikander] – Nathan’s A.I – and the rest of the story is narrated in blocks of various stages of experimentation. Through the course of the test, Caleb becomes attached to Ava.

What happens here is very interesting to note. Caleb reports his observations, first with cogent and ultimately sane explanations. But his attachment to Ava later clouds his own judgment and paranoia grips him. In retrospect, this almost seems like a reverse Turing Test. It is an audacious concept explored by Alex Garland. This hypothesis later hits home when in a particularly unsettling scene, Caleb slits his own arm open to see if he is really human or not.

It is ultimately revealed the Nathan is a sick psychopath. He made numerous other A.I’s – only to keep them confined, performing tests on them (and often using them to whet his own perverse appetites) and ultimately making them destroy themselves. Nathan’s nature is consistently, and intelligently foreshadowed throughout the film.

Confident in his own assumptions, Caleb approaches Ava and tells her the truth about Nathan. The next day, Nathan reveals everything to Caleb, catching him in his own web. The competition and the lottery was a smoke-screen, and Ava was already sentient to the point of exhibiting real human conscience and emotions.

Since Caleb had already hacked Nathan’s computers, allowing Ava to escape her confinement. Nathan tries to stop her, but is stabbed by Kyoko – his personal assistant, who incidentally, is also humanoid.

Ava approaches Caleb and asks him to wait. She then enters Nathan’s room – where he had kept the other female humanoids. She goes on to cover herself with the skin from the other models and dresses herself up. 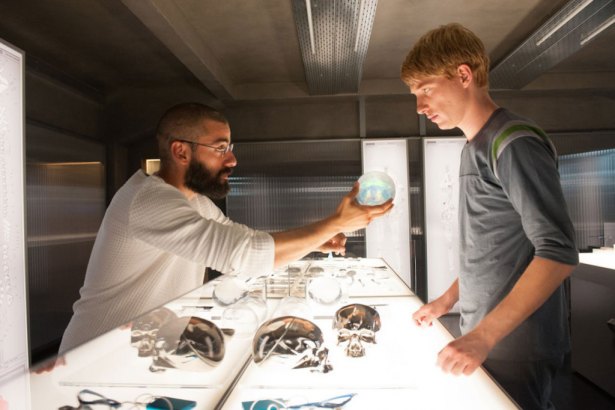 She then wanders out of the room, and escapes the facility, leaving Caleb locked inside. This eventual escape can be compared to Plato’s allegory of the cave. Inside the facility, the only truth she knew was the walls around her and what Nathan told her. When she goes outside, she is effectively escaping her ‘cave’, and is free to make her own truth for herself.

The final scene shows Ava standing amidst a crowd in what is supposedly a traffic intersection, or a crowded plaza. Fade to black.

Perhaps Ava finally comes to know what it means to be human and is ready to mingle with others. This could also mean that she is particularly disappointed in what she sees. Human beings, largely, are the same species after all, and perhaps it means she has just escaped from a cave and entered a different one.

Her eventual betrayal to Caleb shouldn’t come as a surprise. It wasn’t real after all and one can’t help but wonder that the experiment was meant to be done on Caleb himself – someone the society won’t miss in the least.

Overall, ‘Ex Machina’ is perhaps science-fiction at its finest, and goes where films today don’t dare to go, asking challenging questions about morality, free will, identity, and over all, what it really means to be human.

What are your views on the film and its ending ? Tell us…