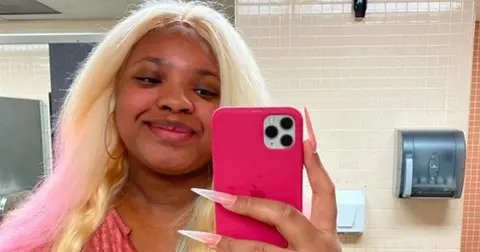 Despite being mired in several controversies, it appears that Lovely Peaches is not dead – any rumors stating otherwise are baseless. Brittany Johnson or Lovely Peaches shot to fame in an age where shock and awe make people go viral. Her song, ‘Burnin’ ‘N’ Itchin,’ pushed her into the spotlight on TikTok, even more prominently. You can hear it below.

The 19-year-old native of Louisiana is no stranger to dark content – from dealing with bodily fluids to sex trafficking involving children. Her Snapchats involving her eating feces, period blood, and bodily secretions evolved to topics like child abuse and sex trafficking when she found out she was expecting a baby. Walking the line between comical and deeply problematic is a tough act, and Lovely Peaches seems to have turned it into her skipping rope. Of course, death scares are a significant part of her work – including Instagram Lives, where she’s detailed how she’d kill Cora, her daughter. Now, it appears as though Lovely Peaches has become the subject of a death scare herself. So, how did it happen?

Rumors about Lovely Peaches’ death started doing the rounds when some sites reported that she might have passed away. There’s been a suspicious lack of details, however, since the story has been merely labeled as ‘developing.’ It has not stopped fans from sharing the news until the matter snowballed. However, when it comes to Lovely Peaches, the question arises whether she’s been behind the death rumor herself? One would not put it past the controversial social media personality. But Lovely Peaches has been continuously posting on her Instagram account (which now seems to have been taken down) in an attempt to combat said rumor.

While it is always advisable for netizens to verify before sharing the news, it is understandable in this instance why this confusion might have arisen. After all, Lovely Peaches seems to have removed her TikTok account, which led many fans to believe that the stories about her demise were true. However, the truth of the matter is that her controversial content often leads to her accounts being taken down. Lovely Peaches is locked in a constant battle with Instagram moderators to keep her account, and often pops up with temporary profiles. A similar fate might have befallen her TikTok profile as well.

As things stand, Lovely Peaches is young and in good health. Thus, it is unlikely for her to pass away anytime soon unless she meets with an accident. Either way, with the notoriety the content creator has achieved, her death will likely be covered by trusted media outlets. Thus, we advise readers to verify any news before sharing it to avoid such death rumors. For now, Lovely Peaches is doing what she does best – creating content. Here’s the latest video she has posted about hating trains. See it below.