Man has always used his imagination to create stories to serve a purpose. The ancient texts are rich in allegories through which they tend to spread their messages. Stories are an essential part of civilization, and no one can deny that they’ve had a huge impact on how human minds have evolved throughout the years. Now, among all such stories, there are numerous instances where the storytellers have let their imaginations run wild by including elements of fantasy, giving the characters special attributes which are not seen in reality.

Since then, the fantasy genre has come a long way. In this day and age of technology where anything can be possible using computer-generated imagery (CGI), the genre is seeing popularity like never before. With the advent of the MCU franchise, fantasy films are the most popular film genre in today’s world. So if you think you have not had enough of the genre yet, then we’re here to help you. Here’s the list of really good fantasy movies on Netflix that are available to stream right now: 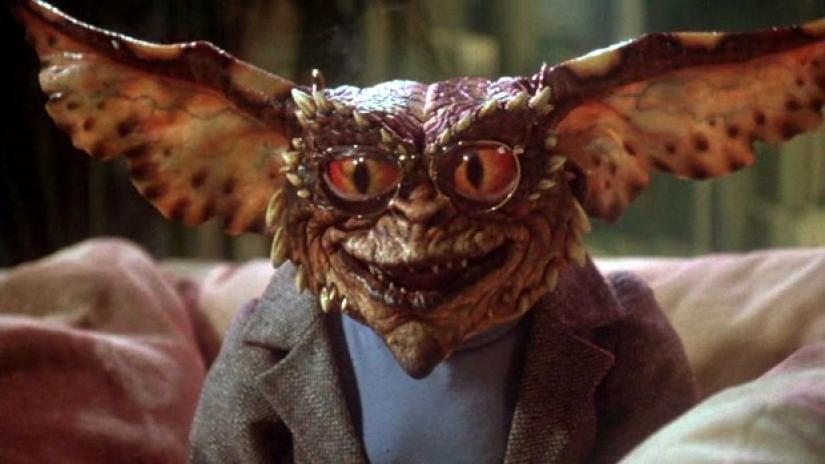 A wonderful fantasy film by Joe Dante, ‘Gremlins’ is the story of an unearthly little creature called a mogwai (Japanese for the devil), which is given by a certain Mr. Peltzer to his son Billy as a pet. There are three clear rules you have to follow if you keep a gremlin: no food after midnight; no exposure to sunlight; and no contact with water. Despite Billy following these rules, one night his friend spills a glass of water on the little unearthly creature. Suddenly more mogwais start appearing and wreaking havoc within their household. The problem takes an uncontrollable turn when one such little creature jumps into a swimming pool, spawning an entire army of mogwais. This film is credited for giving birth to an entire array of films involving tiny monsters, like ‘Ghoulies’ (1985), ‘Troll’ (1986), and the ‘Critters’ franchise’. The film wonderfully parodies many generic film tropes, along with incorporating essential elements from fairy tales into its story. 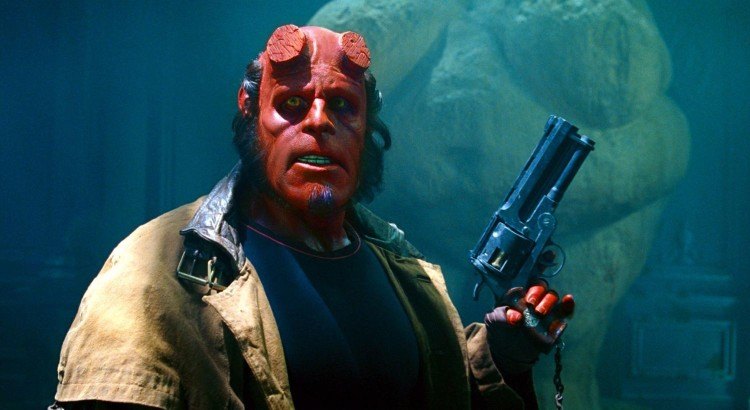 Acclaimed Mexican director Guillermo del Toro helmed this 2004 fantasy film about the unorthodox superhero, Hellboy. Hellboy was born out of an experiment carried out by the Nazis with the help of a Russian mystic called Grigori Rasputin. However, the Allies managed to spoil the party and take the demon-like infant away. It is this baby which grows up to become the crime-fighting Hellboy. Though he is completely on the side of the good, Hellboy’s past soon catches up with him and he now has to fight the powers he never even knew existed. Del Toro shows his usual mastery in this film by using super-impressive visuals along with a story that has a perfect ratio of action, comedy, and drama. Ron Perlman also does a fantastic job of playing the eponymous superhero. 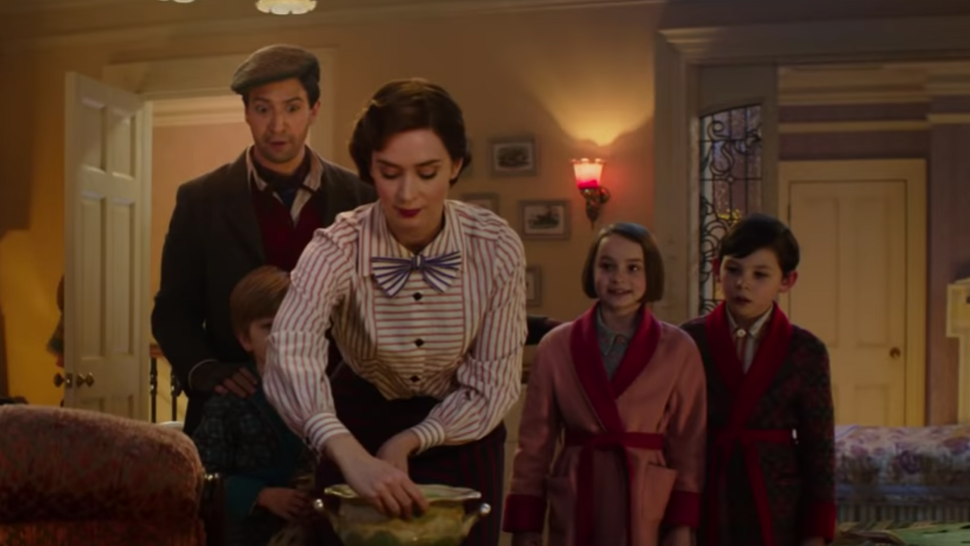 The first ‘Mary Poppins’ film starring Julie Andrews released in 1964 and became one of the most iconic children’s fantasy films of all time. After more than half a century of the original film’s release, Disney came out with a sequel in 2018 starring Emily Blunt in the titular role. In the first film, we see how Mary Poppins becomes the nanny of Michael and Jane Banks and takes them along on numerous magical adventures. But in the 2018 film, Michael and Jane have grown up and it is Michael’s children whom Mary Poppins comes back to look after. With amazing set designs, strong performances by the actors, and great music, director Rob Marshall has managed to create a world which brings back all the nostalgia of the original film. Blunt’s casting also received widespread critical acclaim. 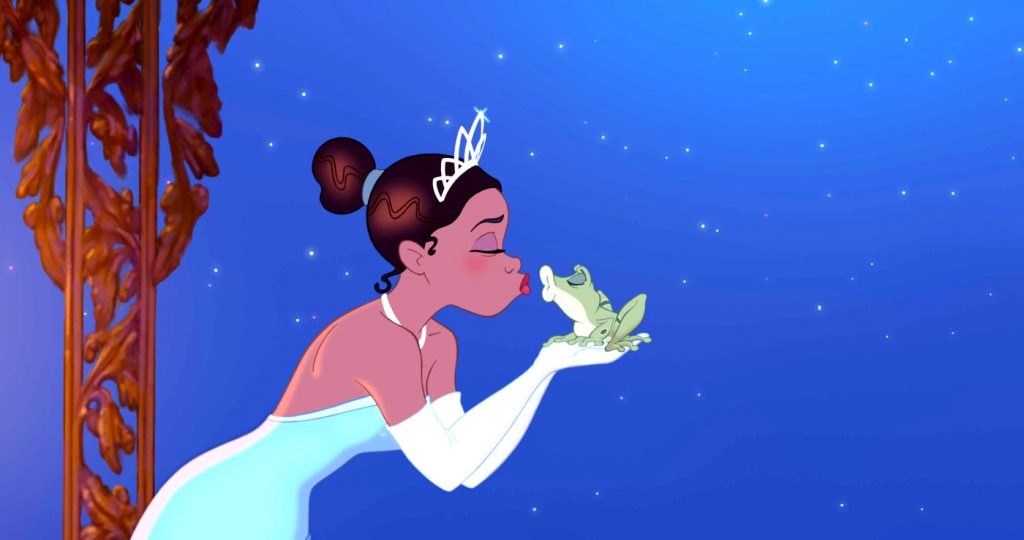 The 2009 Disney animated film ‘The Princess and The Frog‘ is a modern-day retelling of the famous fairy tale, ‘The Frog Prince’. The film begins with showing us two parallel storylines – one with a girl called Tiana who works as a waitress, and another with a young Prince called Naveen of Maldonia who has been cut off from his family property by his parents as he is a spendthrift. At a certain point in the film, Naveen has been turned into a frog by an evil spell, but when he asks Tiana to kiss him and break the spell, instead of Naveen returning back to his human form, Tiana herself turns into a frog owing to the fact that she is not a princess. The film then follows their adventures as they set about to make their lives fall into place. The most unique aspect of this film is the use of old-school animation which made Disney so popular in the first place. The story, the characters, and the music are also wonderfully blended to produce a film that is bound to be loved by children all over the world. 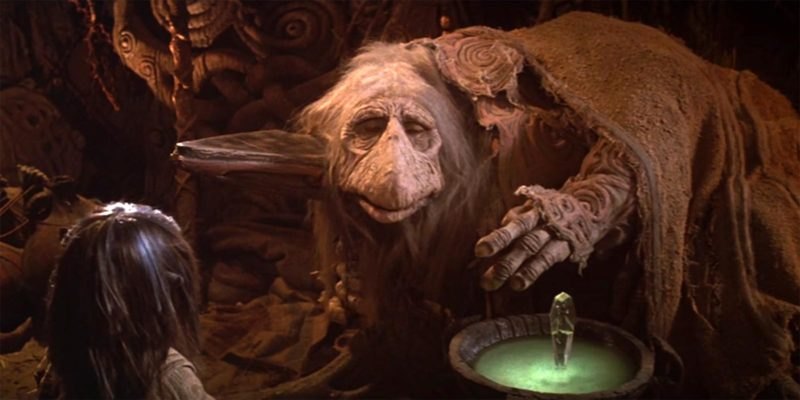 A film which revolutionized the used of animatronics, 1982’s ‘The Dark Crystal’ was far ahead of its time. The story of this dark fantasy film revolves around an elf-like creature called Jen, who has to restore the natural balance of his world by repairing a magical object known as the Dark Crystal. Any damage to the Dark Crystal means a serious threat to the stability of the planet, and if the repair is not done within a specific day, the planet Thra might even cease to exist. When ‘The Dark Crystal’ initially released, fans did not take to it that well owing to the fact that it was way too dark for a children’s film. However, as the years passed by, the film managed to gather a cult following. The sets, the costumes, and even the way different fictional species in the film have been designed are truly exceptional. 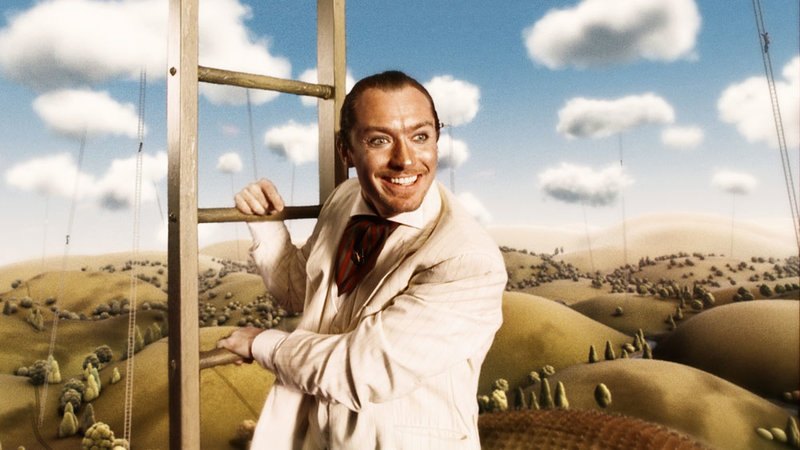 Terry Gilliam helmed this 2009 fantasy project starring Heath Ledger, Christopher Plummer, Tom Waits, and Andrew Garfield. The story of ‘The Imaginarium of Doctor Parnassus’ centers around the eponymous doctor who goes from one town to another as a traveling showman. Doctor Parnassus (Plummer) carries around a magical mirror and invites audience members to step inside it to take a trip across his imagination. However, not many know that Doctor Parnassus does this after having made a bet with the Devil regarding his daughter. If he loses the bet, the Devil will be taking control over his daughter’s soul. Doctor Parnassus’ objective is rather simple – he has to make five people choose enlightenment over ignorance inside his Imaginarium.

When Heath Ledger passed away during the shooting of this film, Johnny Depp, Jude Law, and Colin Farrell offered their services to play his character, and each of them plays his character inside different versions of the Imaginarium. The film received critical acclaim because of the performances and visual aesthetics. With Gilliam, we can always expect layered humor with a lot of subtext, and he does not disappoint in this regard as well. 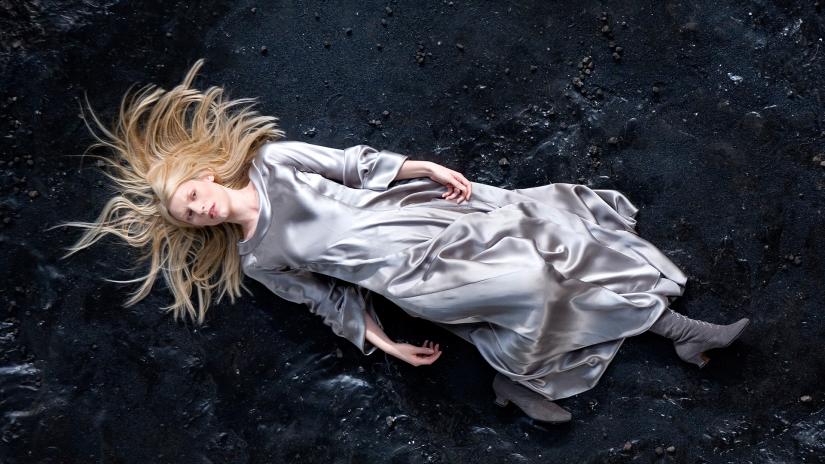 Neil Gaiman, undoubtedly, is one of the most unique voices in the world of fantasy literature. His works have constantly been adapted for films and television for a long time now, but for many, 2007’s ‘Stardust’ remains the best adaptation of Gaiman’s writing. The film centers around the story of a man called Tristan who promises his lady love that he will go inside the magical country of Stormhold to bring a star for her. But what ends up happening is that the star he captures turns out to be a woman who is being hunted by the Prince of Stormhold. Suddenly bringing home a star becomes a much more tedious and dangerous job than what Tristan had imagined. The film stands out because of Gaiman’s original source material which is a unique story full of twists and turns and has a distinctive sense of humor only the writer can achieve. Actors whom we usually don’t see indulging in the fantasy genre, like Ricky Gervais, Robert De Niro, Michelle Pfeiffer, and Peter O’Toole, play important roles in this film. 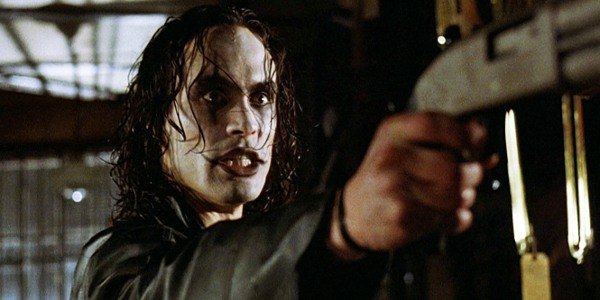 This was the last movie Bruce Lee‘s son Brandon starred in before his untimely death at the young age of 28. Brandon died on the sets of ‘The Crow’ when a prop gun with a bullet in it was shot at him. In the film, Lee plays the role of a young musician who has been tortured and killed along with his girlfriend and left on the side of the road. It is a magical crow which resurrects Lee’s character Eric Draven exactly one year after his brutal incident. The crow enables the resurrected Draven with special powers to avenge his and his girlfriend’s death. The visual style used in the film is rather unorthodox and goes a long way in creating a distinctive mood and tone for the story. Despite being a fantasy flick, ‘The Crow’ operates in a dark world where violence is the order of the day. 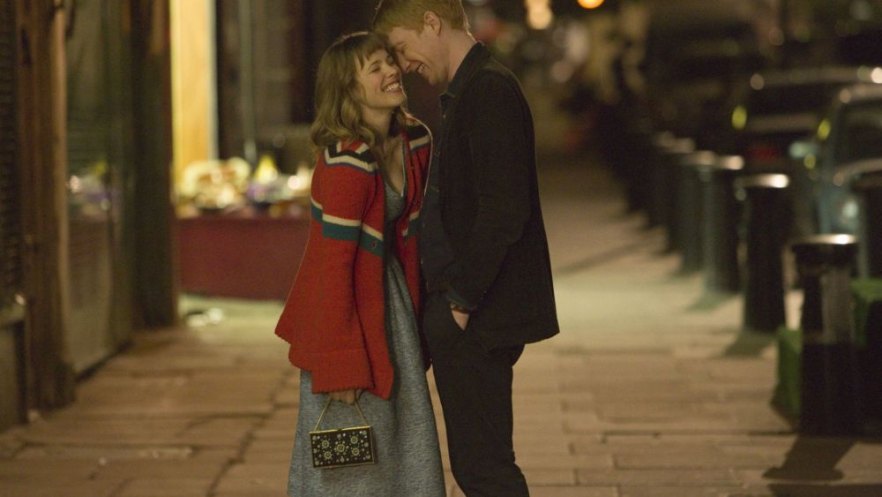 Well, time travel is surely fun, and an amazing power to have! But it sure does come with its own challenges. Take for example the leading character of the 2013 film ‘About Time’, Tim Lake. Like all the male members of his family, Tim has the ability to travel back in time and change certain facts as and when required. Tim believes that he can use this power to positively influence his love life. After a lot of attempts, he does meet a woman he falls for. But as their romance starts developing, a sudden mistake in time traveling by Tim makes him arrive at a point in time when the two of them haven’t even met yet. The characters are the only redeeming aspect in this otherwise dull film. They are quite lovable, and you will watch the film only to be with them and witness their journey. However, there are many gaping plot-holes regarding several aspects of the film’s time-traveling that the director never bothers to explain. 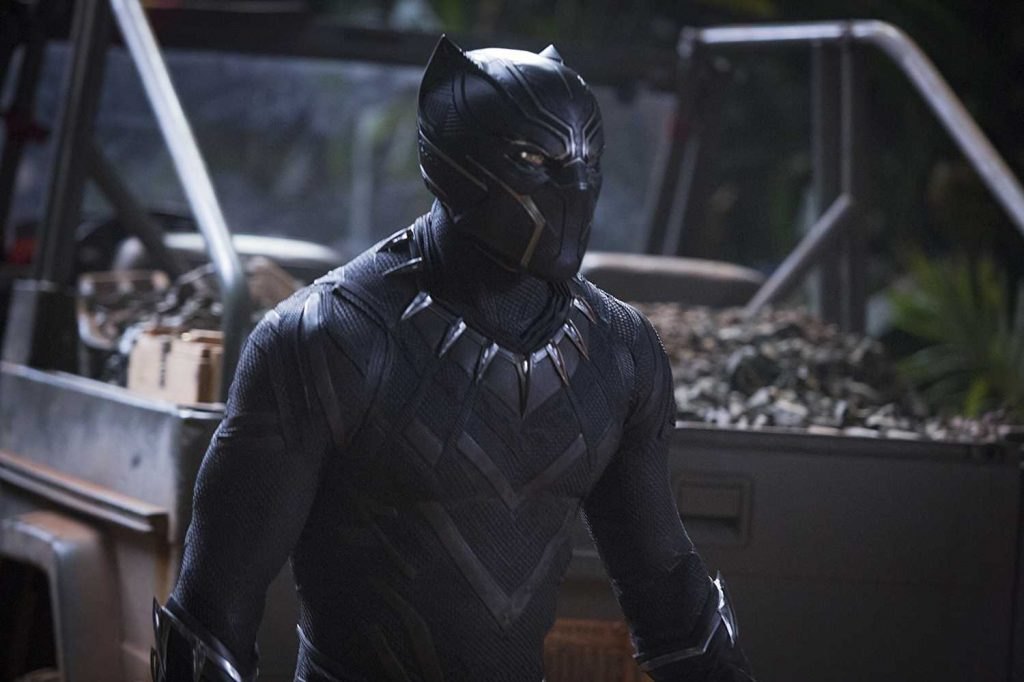 Fans were eagerly waiting for Marvel to make a film on Black Panther for quite some time. When the film finally dropped in 2018, fans just couldn’t have enough of the king of Wakanda and his story. The film wonderfully explains to us the legend of the Black Panther as the protector of Wakanda, a country in Africa which was never colonized by Europeans and thus has developed completely on its own without any external influences. King T’Challa is the central character of the film who becomes the ruler of Wakanda after the death of his father, which we witnessed in ‘Captain America: Civil War’. However, when his authority is challenged by his long-lost cousin, T’Challa is made to prove his worth once again. Along with the many fantasy elements, the film offers a revisionist look at African history, something which has been quite well-received by the audience. 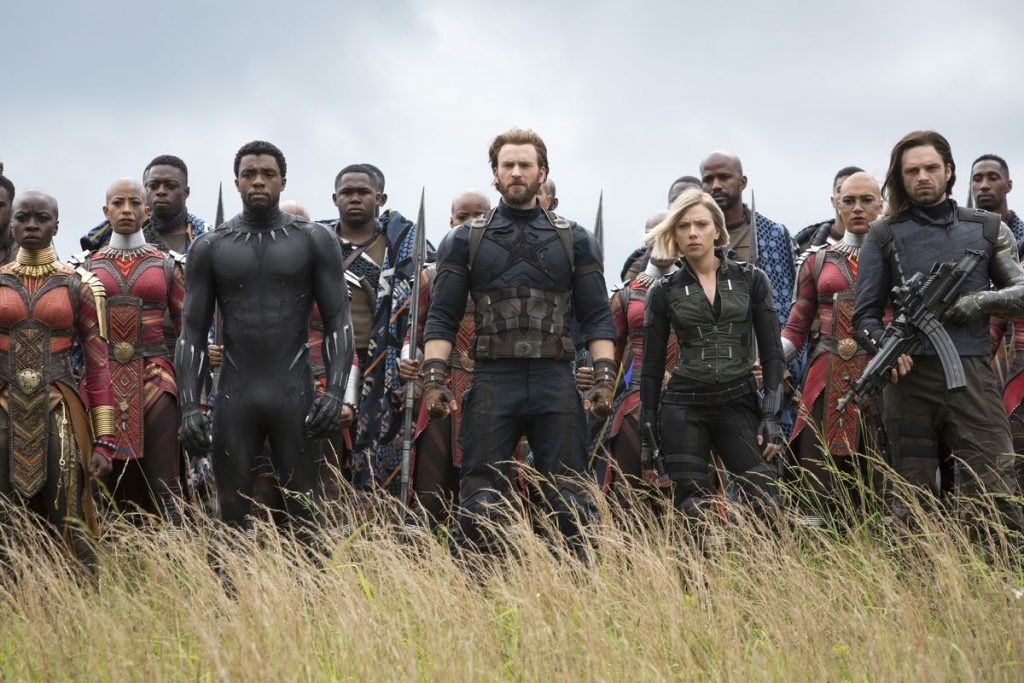 ‘Avengers: Infinity War‘ was the beginning of the end of the storyline which began in 2008 with ‘Iron Man’. The film follows the Avengers as they try to save the earth from the mad Titan Thanos who has obtained the six Infinity Stones and the Infinity Gauntlet. However hard the Avengers try to stop him, Thanos proves to be too powerful to stop and here, he ultimately ends up destroying 50% of all the life forms in the universe. The film works brilliantly to set up audiences for the ultimate climax we witness in ‘Avengers: Endgame’.