Where to Stream Feels Good Man? 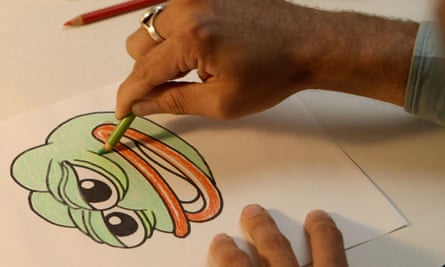 Since memes have become cultural icons, they are open to reinterpretation. Nobody knows this better than the creator of Pepe, the Frog. ‘Feels Good Man’ features Matt Furie, the artist who created the character. He realizes how the alt-right has co-opted Pepe and struggles to reclaim the image from them. It is humorous, but also shows the social impact of memes and internet virality in today’s day and age. Curious to know where to stream ‘Feels Good Man’? We have got you covered, but first, let us tell you a little more about it.

What is Feels Good Man About?

Pepe the Frog goes from becoming an indie comic character to a cultural icon of hate, used by the alt-right. Furie realizes his mistake too late and struggles to bring Pepe back from the cusp of darkness. The question is whether Pepe’s image will be redeemed on the internet. The documentary sees Furie appearing as himself, attempting to navigate the cultural divide that exists in the United States of America. We’ve known all along that memes have become highly impactful, but ‘Feels Good Man’ drives the point home.

Is Feels Good Man on Netflix?

Netflix has some impressive films and shows in its roster. The platform has distinguished itself as a preferred choice among viewers. While ‘Feels Good Man’ is not on Netflix, you should check out ‘Fyre,’ the documentary about a music festival that goes wrong. We learn about the man who promised visitors everything but ended up delivering cheese sandwiches and tents as a music festival experience. Although an understandably scandalous situation, there is an undercurrent of restrained humor marking the documentary.

Is Feels Good Man on Hulu?

Hulu keeps making smart additions to the platform so it can stay ahead of the curve. ‘Feels Good Man’ is not on the site, but Hulu has been known to satiate the viewers. Therefore, we recommend you check out ‘Religulous.’ Bill Maher plays the devil’s advocate, raising questions about religion. He meets with people of different faiths and asks them about homosexuality, religious extremism, and even proof of God’s existence.

Amazon Prime sources content from all over the world, which is why viewers flock to the platform each time. ‘Feels Good Man’ is not on Amazon Prime, but you should watch ‘Stop Making Sense,’ instead. It is a commentary on the cultural impact that Talking Heads, the band had – as we follow their numerous performances.

If you want to watch ‘Feels Good Man’ online elsewhere, we have got you covered. Head to iTunes, Vimeo on Demand, FandangoNow to buy and watch the movie.

Where to Stream Feels Good Man For Free?

Sorry, but you cannot stream ‘Feels Good Man’ online for free, at the moment. You have to wait for it to arrive on a platform with a trial period. However, we’d like to urge our readers to pay for the art they consume.