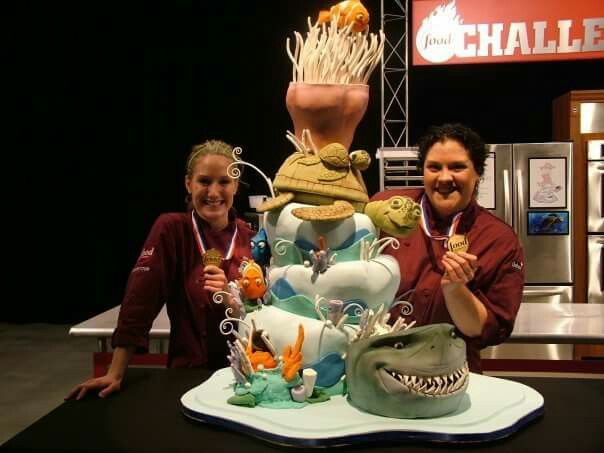 ‘Food Network Challenge’ is a competitive cooking series that first premiered on January 9, 2005, on Food Network. The show features contestants, experts in their own cooking specialty, competing against one another in the episodes. The episodes are of different themes and the contestants are selected based on the relevant skills.

Switch to Food Network any time of the week and you are guaranteed to find a show with talented competitors, a grand stage set for an enthralling cook-off, a renowned host, a larger-than-life panel of judges and a crowd, all excited, and encouraging the spirit of the show. Cooking competitions, over the years, have become a vital part of primetime tv that the viewers like to watch. Another major reason for people to love such shows is that they can watch them with their whole family.

Moreover, these competitions always offer the viewers something to learn. Whether it is a new recipe and cuisine or a useful trick and hack altogether. They also get learning pointers from the world-famous judges themselves. The audience also connects with the background stories of the contestants. Their stories are most of the time encouraging and motivational, and they touch the audience on an emotional level.

Food Network Challenge Season 15 Release Date: When Will It Premiere?

Season 14 served as the first installment of the revived version of the show, following its season 13 conclusion in 2011. The reboot brought the same excitement and thrill back on tv screens. It had many themes based on Christmas, winter and holiday.

The reality competition is meant for everyone, and frankly, who does not like food? Apart from the cooking, the audience also got to watch new locations, better themes, and tougher challenges.

Because of the positive response, we are hopeful that the series will get another season. If renewed, we can expect ‘Food Network Challenge’ season 15 to premiere sometime in December 2020.

Keegan Gerhard was the first host of the show. He is an award-winning pastry chef and owner plus executive chef of renowned restaurants in San Diego and Colorado. Keegan hosted the show for 9 seasons and was replaced by Claire Robinson in season 10. Keegan, instead of being the host, began serving as the judge of the series.

Claire Robinson is an author, talented cook and television host. Before ‘Food Network Challenge’, Claire associated with Food Network as the host of another show called ‘5 Ingredients’. She is also the co-host of ‘Chef Race: UK vs. US’ that airs on BBC America.

Alongside Keegan, ‘Food Network Challenge’ has featured a rotating panel of judges across the seasons. They are Kerry Vincent, Katherine Alford, Mark Bittman, Patrick Coston, and Mark O’Connor.

In season 14, Ian Ziering joined ‘Food Network Challenge’ as the new host. Ian is a renowned actor and voice artist. He is best known for his performances as Steve Sanders in the show called ‘Beverly Hills, 90210’ and as Blue Devil in ‘Swamp Thing’. He also voiced for Vinnie in ‘Biker Mice from Mars’.

Ian is expected to make a comeback in season 15. As for the judging panel, we expect to see most of the aforementioned judges making their return.

What Can Food Network Challenge Season 15 Be About?

Depending on the particular theme of the episode, a group of contestants, who are experts in that specialized culinary field, face the cook-off to win a grand prize of $10,000 along with a gold medal. The participants have to complete the task in the given time limit – generally 8 hours, and comply with the given set of rules.

For example, if a particular challenge is based on the theme of ‘wedding cake’, the contestants might have to follow the instruction of creating it to a particular height, tiers, and layers. The dish created is not considered complete until it is presented at the judges’ table in proper shape and size.

The series starts with different challenges, mostly related to cakes. Apart from cakes, the themes also include best BBQ, pie, pizza, steak, seafood, gingerbread, pastry, beef, and a lot more. The seasons continue with more such common and uncommon themes. The episodes are held in front of a live audience and usually at different locations. The locations are generally tourist spots like Disney World or Mall of America.

In 2009, the series introduced the concept of eliminations. The eliminated contestants are requested to leave the stage before the winner is announced. In the following episodes, apart from the winner, runners up are also introduced who receive silver and bronze medals.

Season 15 will feature a similar format. But we can expect some slight twists in the gameplay.

While we wait for more updates on season 15, you can catch up on all the previous episodes on Food Network.