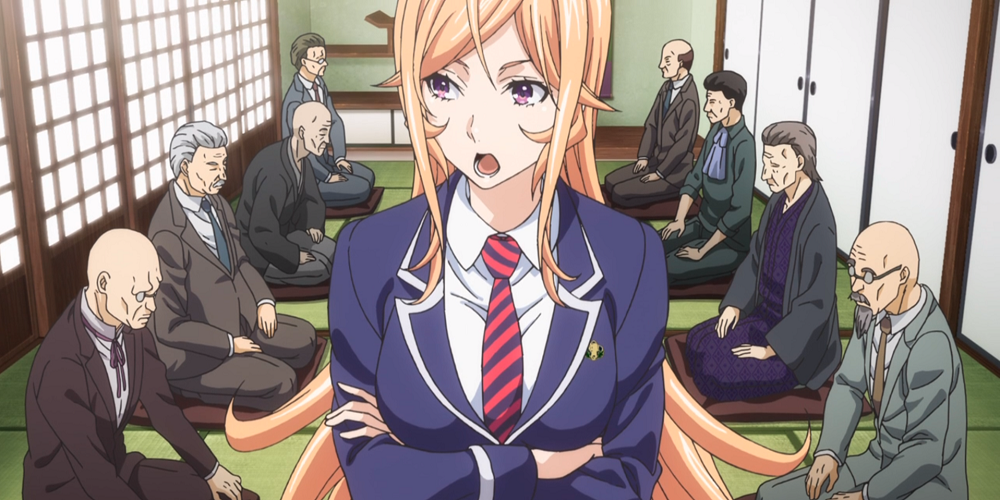 There were times when I really wanted to give up on the fourth season because of its extremely tedious approach and then there were other times when the anime surprised me with its ingenious fanservice moments and shounen metaphors. In its finale, with no panning shots of food, judge reactions or even cliffhangers, the anime concludes everything in the most predictable yet satisfying way.

At this point, I really feel that the anime needs no further extensions and I’m tempted to assume that this was its last season; however, that’s not the case. I guess we’ll just have to wait and see what the next season has in store for us. I am certainly willing to keep an open mind in context with all the ways in which its story could further fork itself into new directions, but I’m still doubtful if anything else would be able to come in par with such an upbeat finale.

Episode 12 is basically a culmination of everything that happens in the entire season. After winning her battle against the Elite Ten, Nakiri finally breaks free from her shell and even appreciates Soma. The Totsuki Rebels now get to be the new leaders of the academy and replace all the members of the Elite Ten. While Soma gets to be a rank one Elite, Nakiri replaces her father and gets to be the next director of the academy. After the ruthless rule of Azami in the academy, Soma and Nakiri are finally able to bring in some peace.

Soma openly allows all the students to challenge him for a Shokugeki anytime they want and Nakiri proves to be the perfect leader who will surely lead the academy towards a better future. Meanwhile, Megumi, too, is finally able to win at something and she even travels the world later on. On the other side, Rindo and Tsukasa are also liberated from the binds of their own professional life as Elite chefs and they embark on a worldwide adventure together. Pretty much everyone, including Azami, gets a satisfying end and the academy goes back to its golden old ways.

With each passing season of ‘Shokugeki no Souma’, as viewers, we were introduced to several groundbreaking food competitions and challenges faced by the primary characters. And with each of these, the bar was set higher. It almost seems like, at one point, the bar was set so high that the anime failed to surpass it. Season 4, though it is quite entertaining and does not unnecessarily stretch its runtime, comes off as a tarnished version of all the previous installments. Now ‘Food Wars’ never really had a deep storyline in the first place, so that’s not exactly where the fourth season goes wrong. It mostly falters with that one thing that made it a visual feast in the first place—the process of each Shokugeki.

In each of the previous seasons, this process was coherently divided into four parts: the preparation, the cooking, judge reactions and of course, the fanservice. Each of these processes was meticulously explored and fleshed out perfectly. However, season 4 failed to do so and rushed through many of its Shokugeki. Its heavy emphasis on judge reactions just dwindled the overall impact that was initially created by the cooking and mostly because of this, the battles lacked the gravity that one would expect from them. This, in turn, also influenced the overall development of its characters. While most characters were already developed in the previous seasons, season 4 missed the opportunity to explore the backstories of the characters it had previously ostracized.

Despite its repetitive format, season 4 felt like a rush of adrenaline during its first few episodes and well-paced final battles. If the entire season had been structured like the showdown between the Nakiri/Soma and Rindo/Tsukasa, it could’ve been so much better.

Overall, I won’t say that I am entirely disappointed with this season because if not anything else, it sure as hell is entertaining. But it simply lost the dynamic edge that it once had. Not to mention, the voice cast of this season deserves a special mention here as they managed to keep the dynamic of the characters alive and very well saved this season. Hopefully, J.C Staff has something better planned for the upcoming season.

Will There be a Itaewon Class Season 2?

Where is Camp Getaway Filmed?

Is ‘Belgravia’ Based on a True Story?