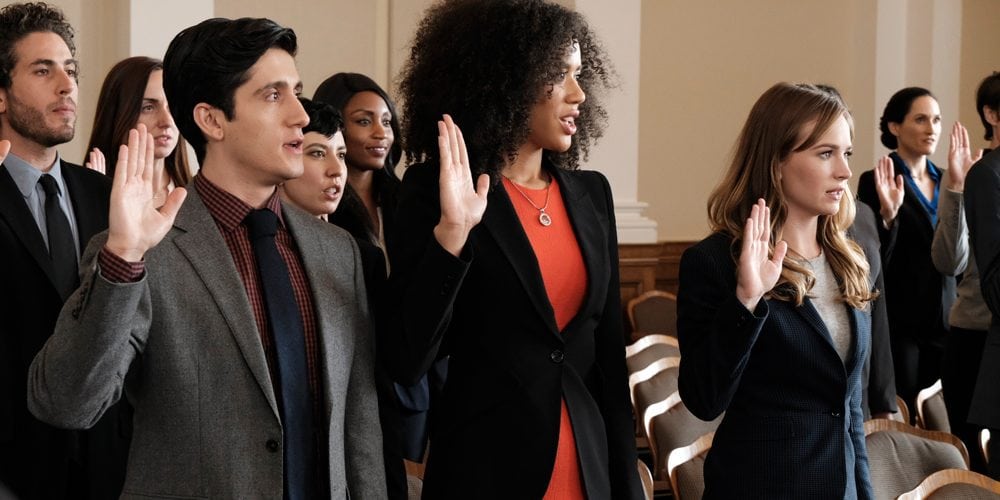 ‘For the People’ is an American legal drama series that airs on ABC. It first premiered March 13, 2018. Created by Paul William Davies, the series has ABC Studios, Shondaland, and Davies Heavy Industries, involved as the production companies. Paul William Davies, Shonda Rhimes, Betsy Beers, Donald Todd, and Tom Verica are on board as executive producers.

‘For the People’ is set in the Southern District of New York (SDNY) Federal court, known as “The Mother Court”. It follows new lawyers who are working for the defense and the prosecution as they handle the most high-profile and high-stakes cases in the country as their personal lives intersect. The show faced many hurdles like the replacement of the lead cast members and other problems, but it made it through all of it and has even managed to garner a steady fan following while earning praise for its clever dialogue and depth of character.

‘For the People’ has seen two successful season till now. But will it be renewed for a third season? Here’s everything we know about it.

For the People Cast: Who is in it?

For the People Plot: What is it about?

‘For the People’ is set in the Southern District of New York (SDNY) Federal Court, which is popularly known as the ‘Mother Court’. The premise is centered on lawyers for the prosecution and federal public defenders as they try high-profile and high stakes cases. As is the scenario in legal circles, these lawyers find their lives intersecting at various points and despite developing interpersonal relationships, they must leave it all outside the courtroom as they sit across the table from each other, facing a judge, prepared to give their clients the best defense possible.

The show borrows its name from the historic Gettysburg Address delivered by Abraham Lincoln, where he said, “…that this nation, under God, shall have a new birth of freedom — and that government of the people, by the people, for the people, shall not perish from the earth.” As is evident from the title, the theme of the show is how the democratic rights of the citizens and all parties are championed through the legal system that has been set up in the USA. However, this does not mean that ‘For the People’ shies away from showing the underbelly of this system too, as we see just how far lawyers are willing to go to come out on top of a case. The entire proceeding often becomes a battle of egos as lawyers refuse to back down from a fight, battling tooth and nail not just for their clients, but their personal satisfaction as well.

While the legal battles rage in the courtrooms, there is plenty going on in the personal lives of the lawyers as well. Some of them in the public prosecution system wish to go over to the side with more money, vis a vis, become a private defense attorney. There are also those who are idealistic and are actually trying to do good within the legal system. All their personal lives come to a head outside and inside the courtroom, and the storms that rage inside all these characters are often mirrored in the fiery, impassioned speeches they deliver during trials.

‘For the People’ gives viewers a good idea of what trial law and the justice system is like. However, more importantly, through the kind of cases that it portrays going to court, on the show, it tackles several pertinent social issues. Some of these concern health, gender and race politics, police brutality, exploitative nature of big companies, and familial disputes. They even range to more serious crimes against humanity. All throughout, the format of the episodes usually shows a case getting taken up and then follows it through, how it unfurls in the SDNY Federal Court. The concept of the show might be a cliched one, it is, after all, a legal drama centered on courtroom antics. However, it stands out due to how the dialogues are written, which reaches out to the audience and how the character dynamics affect the overall progress of the show.

The show portrays the legal world as a dog eat dog one, and it is fascinating to see how the characters all fight among themselves to try and come out on top of a highly risky but highly rewarding situation.

For the People Season 3 Release Date: When will it premiere?

‘For the People’ Season 2 premiered on March 7, 2019. As far as the next season goes, we have bad news for the fans. On May 9, 2019, ABC announced the cancellation of the show. Considering the declining viewership of the show, it was expected that ABC may not continue for another season. Though, fans should not lose all their hopes. There’s still a possibility that some other network picks up the show. If that happens, we will update you about ‘For the People’ Season 3 release date.

For the People Trailer:

While we wait for an update on For the People’ Season 3, check out the season 2 trailer to refresh your memories. If you haven’t seen the show yet head over to ABC to catch all the episodes of the previous seasons.