Biopics are a hit or a miss. They either manage to portray a real person’s story authentically and with enough power to move audiences or simply fall flat. On top of that, there are some stories that are just extremely difficult to replicate on the screen. For instance, one can imagine why biopics about artists can prove to be rather tough to make given how it is often difficult to portray the “excitement” of making art as opposed to say, a sports competition. 2002’s ‘Frida’ takes up that challenge and comes out with flying colors on a mesmerizing portrait.

As one would have imagined, ‘Frida’ revolves around the Mexican artist, Frida Kahlo. Kahlo’s popularity and cultural influence cannot be understated. She was best known for her self-portraits apart from works inspired by Mexican artifacts. Moreover, she is also known to have attempted to lead a largely free life. She is now considered to be an icon for Chicanos, feminism, and the LGBTQ+ movement. The film mainly revolves around how Kahlo managed to overcome the pain of a crippling injury and a “tempestuous” marriage.

The character of Frida Kahlo is portrayed by Salma Hayek. Some of Hayek’s other movies include ‘Like a Boss,’ ‘Grown Ups,’ and ‘From Dusk till Dawn.’ Alfred Molina plays Kahlo’s husband, Diego Rivera. Geoffrey Rush plays the character of Leon Trotsky while some of the other cast members include Mia Maestro, Ashley Judd, and Antonio Banderas.

Several viewers would have wondered where the 2002 biopic was filmed. It is set in the early 20th century and manages to depict its period rather authentically. The story is set in New York City and Mexico City, among other places. Hence, it is natural for viewers to wonder where ‘Frida’ was shot.

‘Frida’ was almost entirely filmed in Mexico. Most of the filming was carried out in Mexico City. Estudios Churubusco was the major production facility used for filming the movie. Apart from that, the exterior of the second bus scene was shot at San Luis Potosi. Filming was also carried out in Barrio del Alto in Puebla, and Teotihuacán in San Juan Teotihuacán. 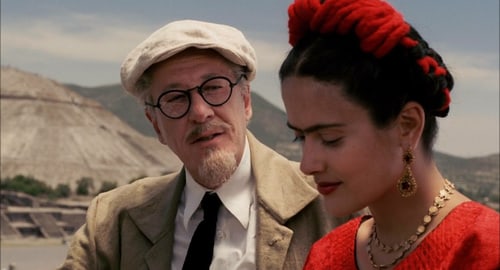 Filming in Teotihuacán proved to be the most challenging since it was a nightmare to get permits. Moreover, the production just had a single day to shoot there. Next, Kahlo and Rivera’s actual San Angel studio was also used as a filming location.