Who is Frog on The Masked Singer? 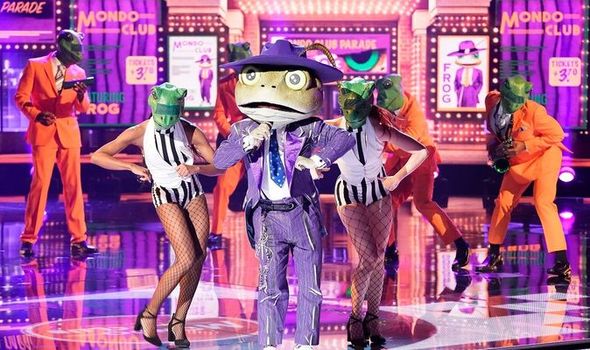 Frog has been one of the most entertaining performers in Season 3 of ‘The Masked Singer.’ Irrespective of the unnecessary flak he’s gotten from viewers, who’ve stated that the Fox show is meant for singers, not rappers, Frog has been able to get the panelists to their feet with his rapping. Never low on energy, Frog’s performances have made it clear that he can spit rhymes. Curious to find out who might be wearing the outfit? We have got you covered with the latest clues and guesses.

Frog’s clue starts sweetly, as he calls his kid, saying that his performances made him think of them. He says that before he became a father, he struggled to find his footing. At this point, we see Frog belting out some moves in front of loaves of French bread placed in line. The Frog says he did everything so fast that the balance in his life was off. However, ever since the kid came along, things have been better. We see Frog next to a hawk at this point.

He imitates the dance move from ‘Footloose,’ saying the kid gave him purpose to put his feet on the ground. Now, Frog wants to give it his best in the competition to bring home the Golden Mask for his kid. After his performance, the additional clue shows a model airplane. You can check out the package below.

Bow Wow or Shad Moss is most likely to be wearing the Frog outfit, and the latest clues only confirm what we’ve known for so long. He makes a call to his child and seems to care a lot about them. Bow Wow has a daughter Shai Moss, and the verbal clues refer to her.

The French bread did have us stumped, but we noticed that it is not just the bread. The bread loaves are arranged in a straight line. Since the arrangement is rather long, it might refer to a Bow Wow song, “Long Bread.” Notably, Frog has dropped previous clues that indicate to other works of Bow Wow. The hawk in the clue package is the easiest one to decipher. It refers to the basketball team, Atlanta Hawks.

Bow Wow lives in Atlanta and has already made a reference to his hometown in his very first clue package. Pointing us towards the Atlanta basketball team is a layered hint because he’s also dropped several clues about his involvement as a basketball player in ‘Like Mike.’ Finally, the model airplane is likely to refer to the time when the internet called out a stunt by Bow Wow.

He had posted a picture on Instagram, claiming that he was flying a private jet. However, he soon got called out by netizens when one fan reported that Bow Wow was flying commercial with him. Check out the post below.

Although the rapper came out saying his post was meant to be aspirational, the internet hasn’t entirely forgotten it, and Bow Wow is known to embrace his flaws. Thus, it is likely that Frog refers to this incident in the additional clue. You can check out a fan’s tweet, remembering the airplane incident and pointing out that Frog is Bow Wow.

THE FROG IS BOW WOW…THE JET WAS A SYMBOL FROM THE BOW WOW CHALLENGE. HOW MANY CLUES ITS GOING TO TAKE #TheMaskedSinger pic.twitter.com/ECM3qDjekW

Fans seem pretty sure that Bow Wow is wearing the outfit of Frog. However, it is likely that Frog’s journey on ‘The Masked Singer’ will come to an end in the upcoming episode. In that case, we will be confident of his identity once he takes off the mask.