Where Was ‘Future Man’ Shot?

‘Future Man’ is a comedy series that airs on Hulu. It tells us a story of an underachieving man who’s roped in to save the world. We follow Josh Futturman, a janitor who manages to complete a game called ‘Biotic Wars.’ Josh’s favorite game is supposed to be unbeatable. However, Josh’s victory is short-lived when the two protagonists from the game, Tiger and Wolf, appear to recruit Josh. Now, he must fight to save the world from the real Biotic Wars. The series follows the three friends traveling through time to save the future.

Naturally, ‘Future Man’ has a fascinating premise, which involves the possibility of plenty of travel. Thus, you might be curious about where the series has been filmed. We have got you covered in that regard.

Where Was Future Man Filmed?

‘Future Man’ takes us to different periods over the seasons. We see the central characters, making trips back to the 1960s and 1980s. In some cases, we see them hurled into a dystopian future. While the travels back in time can still be captured on location, with some smart camera work, it is almost impossible to capture the future, without the help of a studio system.

Accordingly, ‘Future Man’ has been filmed in Montreal, Quebec, and Los Angeles. We have the specifics about shooting right here for you to enjoy.

Josh Hutcherson, who stars as the protagonist, Futturman, was spotted in Montreal. Reports suggest that since his mother was there as well, filming must have gone on for a couple of weeks. We know that scenes were filmed at Sainte-Anne-des-Chênes, or Ste. Anne. The Manitoba town is located to the Southwest of Winnipeg.

Hutcherson spoke of how he liked filming during the summer months, in Ste. Anne. Having filmed there previously, around 13 years ago, the actor made it clear that he had no problems with the heat waves since he is from California. In Ste. Anne, filming commenced in the wooded areas near the Arboretum. The crew set up at the entrance of the Morgan Arboretum.

You can check out a tweet below, where we are informed that ‘Future Man’ is one of the several shows to have filmed in Montreal during the summer.

It is going to be a busy summer for Hollywood filming in Montreal, with the Kevin Hart vehicle Fatherhood, the Neil Bogart bio-pic Spinning Gold, and the TV series The Bold Type, Future Man and Blood & Treasure. Here's my column. https://t.co/Kf2thx9dGR 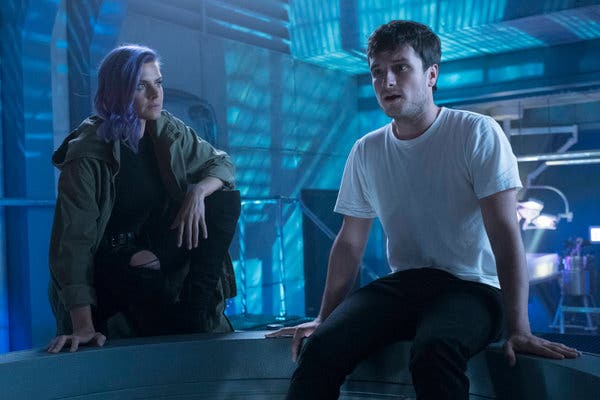 The futuristic sequences have mostly been filmed in Los Angeles studios. There are purpose-built sound stages that help the show capture an authentic setting for a dystopian future. As per reports, scenes have also been filmed at Conway Pl., Mateo St – Mill St, and 635 Mateo St, Los Angeles.

Reports also suggest that Hutcherson, and executive producer, Seth Rogen, were spotted on the streets of Los Angeles, filming scenes for ‘Future Man.’ One of these scenes includes an action-packed explosion. It was executed in front of the famous Canter’s Deli on Fairfax Avenue. The scene consists of a vintage police car that lands upside down, before exploding.

Naturally, this means that the scene filmed in Los Angeles is intended to capture an instance where the protagonists go back in time, to stop the Biotic Wars. In conclusion, it is clear that ‘Future Man’ has made clever use of locations, as well as the studio system, to capture the different timelines that are portrayed within the show. Choosing Canada as a filming destination gives the added perk of tax benefits.

Furthermore, choosing the studios in Los Angeles is pragmatic for the series as well, because of the spectacular amenities, and a relatively lower cost to carry out production in the city itself.