Thrones Y’all! So, winter is finally here after the seemingly never-ending wait that was upon us. But is it all that you hoped for? Well, this is only the beginning of the end, so it is too soon to judge. On the bright side though, it is obviously endlessly gratifying to see your favourite characters return to roles they have aced playing and made their own by now. The sheer amount of joy you feel as the GoT credits play, and the opening sequence, now edited, showing the Night King and his army descend upon the world of men in the North as an icy blanket takes over the wall and its immediate vicinity; that joy, is unparalleled and is testament to the popularity and loyal fan base this show has been able to conjure over the years. Now onwards to the review. 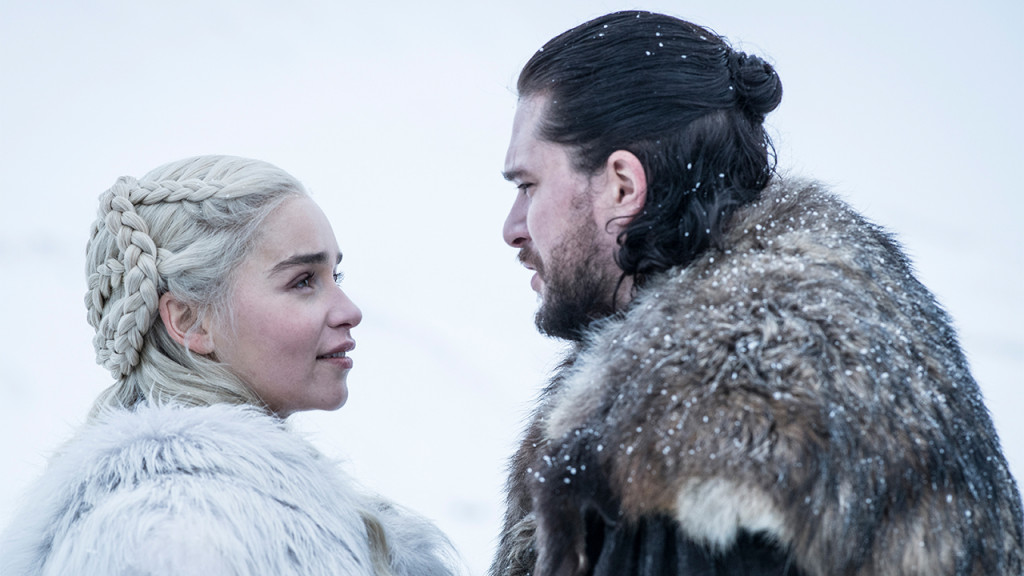 The season premiere, aptly titled ‘Winterfell’ since most of the happenings of the show take place in the Stark stronghold, begins with Daenerys and Jon walking into Winterfell with her army consisting of the Dothraki and the Unsullied. While Sansa seems welcoming at first, she is immediately suspecting of the mother of dragons, even as Jon dismisses her claims and asks her to trust him, since this time around, he knows what he is doing.

Jon also faces significant resistance from the houses in the North that swore allegiance to him and Sansa as the King in the North and the Lady of Winterfell. Winterfell has also been home to its fair share of reunions since last season, and the two most awaited ones happen in the first episode itself, those of Jon with Arya and Bran. While it is mostly endearing to see, Jon would do well to remember that Arya is now a badass and won’t take names while kicking ass. She reminds to stand by his family. Other notable reunions include those of Tyrion and Sansa who last met at Joffrey’s wedding, and of Arya and the Hound. Later, Jon and Daenerys go for a ride with Drogon and Rhaegal, and the episode mines some humorous bits from Jon’s first time on a dragon.

In King’s landing, Cersei visibly atleast, refuses to give a damn about the breach in the wall at Eastwatch. Euron grows increasingly restless of Cersei not paying heed to his advances, but finally reels under and the two have sex. While it is a wish fulfilment for Euron, for Cersei, who is also pregnant with Jaime’s child, it would seem like more of a way of getting back at Jaime, or getting over him, after he left her in the last season to fight the walkers. Qyburn offers the ever quick-witted Bronn unparalleled riches from Cersei, and offers him a contract to assassinate the two treacherous Lannister brothers, Jaime and Tyrion, both of whom have earlier been close associates of Bronn, so it will be interesting to see how that turns out. He is handed over the same crossbow Tyrion used to shoot down Tywin Lannister, with the saying that Cersei believed in poetic justice.

Meanwhile, on Euron’s armada of ships, Theon rescues Yara from captivity, and while Yara sails for the Iron Islands suspecting that Daenerys and her army will need a stronghold to fall back to in case Winterfell falls, while Theon in an honourable move decides to travel to Winterfell to fight alongside Jon and the Starks. Now this is a reunion I look forward to. Back in Winterfell, yet another reunion, this time for two comrades from the wall, Jon and Samwell Tarly takes place.

Soon after, he is visited by Daenerys who wishes to thank him for his service in treating Ser Jorah’s greyscale. It is then revealed to him that Daenerys executed Randyll and Dickon Tarly, Sam’s brother and father as prisoners of war when they refused to bend their knee. He is visibly disturbed and excuses himself to mourn, meeting Jon in the crypts at Winterfell later and revealing to him his true parentage. At this point, he urges him to come to terms with the truth and act on his claim to the throne, inciting him to question if Daenerys would step aside from the throne knowing his birthright and for the greater good, as he did. We will have to wait until the next episode to see the conclusion to this heated exchange of words, since here it is cut short for an ominous message.

The Ending at Last Hearth 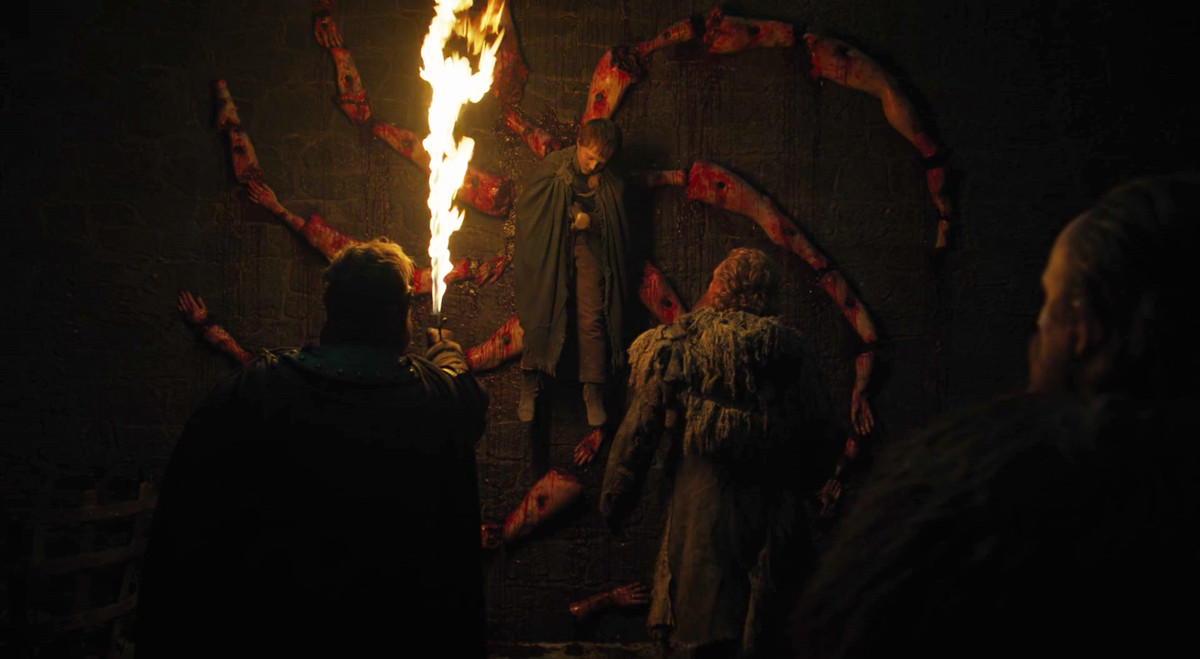 Tormund and Beric Dondarrion inspect a devastated castle after presumably having escaped the carnage at Eastwatch by the Sea, when they run into Eddison Tollett and a couple of other men form the Night’s Watch, who again, presumably received Jon’s raven and abandoned Castle Black, descending South, now that the wall had already been breached. The location is revealed to be the Last Hearth castle, stronghold of the Umbers. Lord Ned Umber, descendant of Smalljon Umber who died in the battle of the bastards on the wrong side of Jon, appeared earlier on in the episode requesting Sansa Stark for Winterfell’s assistance in transporting men from Last Hearth.

In a shocking twist, he is found dead, pinned to a wall, with an ominous spiral forming around him, composed of limbs and arms, which Beric recounts as a message from the Night King. Just as they are talking, the young Ned is reanimated as a White Walker, implying that the castle of Last Hearth proved to be the first line of defence for the Night King’s descending army, an easily broken one at that. The message from the Night King has been earlier foreshadowed in quite a few places, which we will get to later. He is then set on fire by Beric and eventually perishes. Finally the episode ends with the one reunion you’d least expect but with a little more hindsight could always see it coming: Bran and Jaime. You immediately go back to the first episode on that tower when Jaime pushed Bran and initiated what would escalate into the game of thrones, as the screen cuts to black. 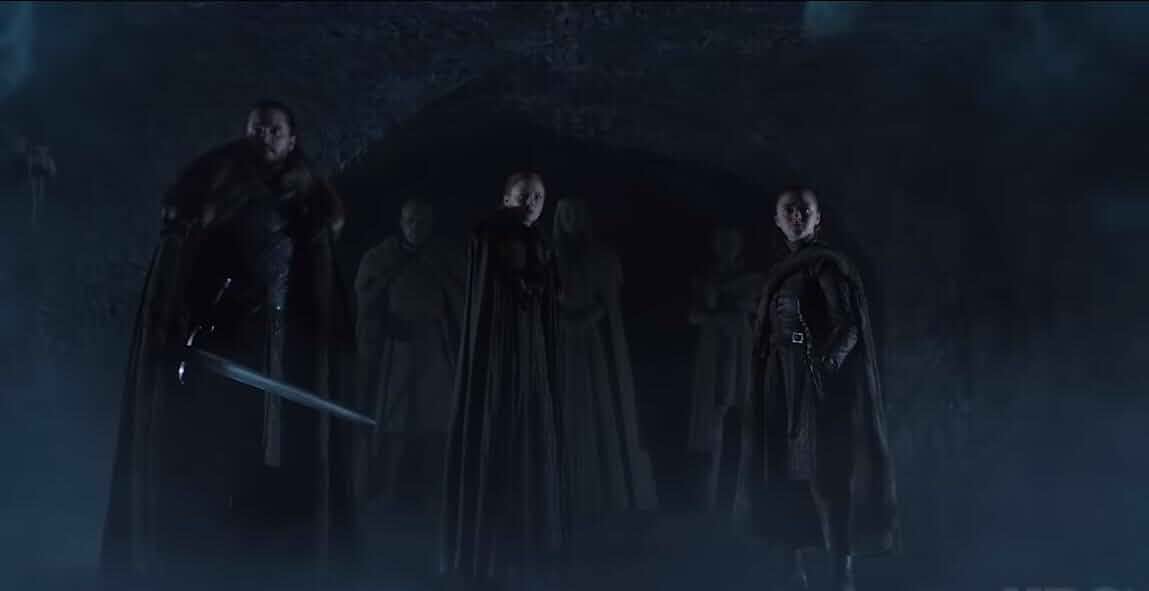 The season premiere was a mixed bag for me. One would assume that since we are only being given six episodes this time around, and with the rumours going around regarding each episode being feature-length, with the first and second ones revealed to be 54 and 58 minutes respectively, that something substantial would conspire during its runtime. It sure gets things moving, but itself moves only inches when it comes to plot development. We now have five episodes to go, and for the battle of Winterfell with the White Walkers and a battle at King’s Landing to conspire with satisfying conclusions, or not, as is the GoT ritual. For now, we have a barely serviceable season premiere that just manages to kick things off with some nicely written moments. We will return the next week with a writeup on the second episode, but till then, the internet is dark and full of spoilers. This episode, isn’t.