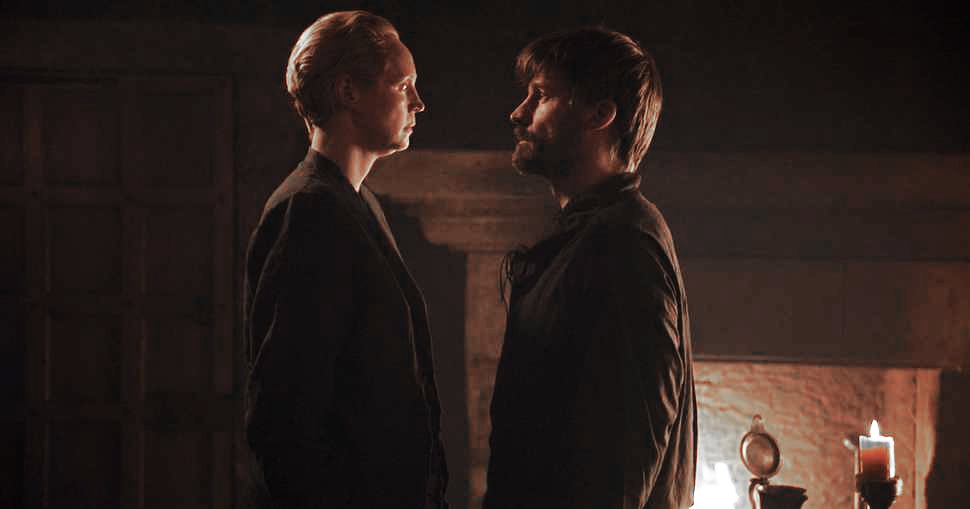 Let’s face it. The Game of Thrones success story did not happen overnight: most of us happened to watch the show at least 3-4 seasons had already passed, until excessively positive word got around and we gave in to the frenzy. I can bet a good amount that a part of the show’s popularity, apart from of course the impeccable production quality, its huge lineup of characters and their complex, intertwining character arcs and some amazing special effects, and a great part of that increasingly positive word of mouth, would be its unique brand of violent, untimely deaths, and its raw, sensual sex scenes. Here, we primarily focus on the brand of the latter.

Game of Thrones has had its fair share of truly diverse sex scenes, some of them even controversial and dividing the audience because of their brutality or just the inappropriateness of it (looking at ya Jaime and Cersei). While scenes of regular sexual intercourse featuring a fair share of nudity have been peppered throughout the series like you would a juicy steak, ‘Game of Thrones’ has also featured scenes of incestual sex, homosexual engagement and even scenes of non-consensual forceful sex, something for which the makers have drawn a lot of flak. However, I have to admit that few shows out there can level the ingenuity, the sheer inventiveness, and dare I say it, the courage or craft necessary to film such scenes in a way that they almost become trademarks of the show, leave alone a reason for its popularity and a part of its positive word of mouth as well.

The final season of ‘Game of Thrones’ is here, and while we will in a subsequent series of lists cover reviews, battles, and the best scenes overall, we thought that the sex scenes require a separate list. While I suspect given the show’s 6-episode long runtime and it being the final season with a lot of story lines to tie together, the makers wouldn’t put in a sex scene until absolutely necessary. We will have to wait until the end of the season to know for sure, but here we rank out the sex or nude scenes as and when they occur in Game of Thrones season 8. Read on.

All I know is fans had been waiting for this one, almost pining even, as the numerous memes and posts on the internet would suggest. This one had been brewing since as long as Season 3, probably more than any other unrequited romance on the show, so the passions being ignited was obvious. What added more fuel to this vehicle was the revelation by Brienne that she was a virgin just moments before in a drinking game, when the crew sat celebrating in the Halls of Winterfell, following the Night King’s defeat in ‘The Long Night’. It is Jaime that approaches Brienne in an inebriated state, but the attraction as it turns out was mutual all along, as Brienne quickly submits to her desires as well. It is all the more endearing given how narrowly they escaped the white walkers during the long night, and how Brienne was knighted by Jaime just an episode earlier.

While the scene itself involved no explicit nudity or lovemaking except for some sensuous kissing, it is the long histories of the characters and their visible, unsaid longing for each other that made this one worth it. However, this too ends in heartbreak for Brienne when Jaime departs from Winterfell reminding him of the monster that he has been, as he embarks for King’s Landing upon hearing news of a possible carnage by Daenerys that might threaten Cersei’s and his unborn child’s life. All said and done, the only person who I think would be miffed with this one would be Tormund Giantsbane, although he seemed to move on quite quickly. Quite a shame we wouldn’t get to see the monster babies he would’ve had with Brienne. 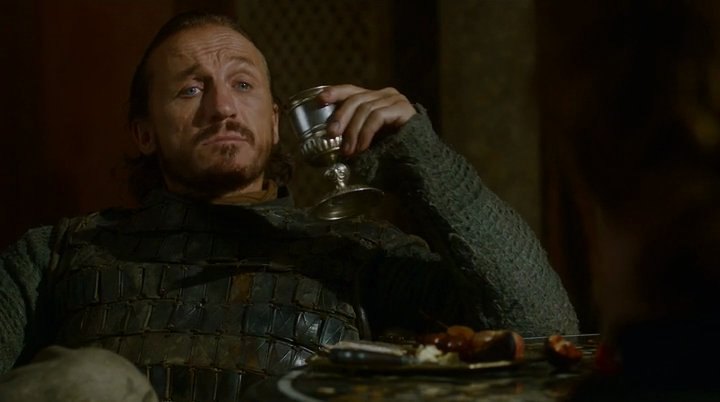 ‘Game of Thrones’ has the kind of indulgent sexual exchanges that characters participate in from time to time for pleasure, and the kind better defined by the next entry, that are keenly essential to the plot progression. Both of these occur in rather quick succession, and this one is of course, more explicit and indulgent in nature. Bronn after having returned to Winterfell sees fit to indulge in a foursome, including him and three other prostitutes, because why the hell not. The three prostitutes are see baring it all, with the exception of clear frontal nudity, which I thought was in good taste. The scene quickly goes from whimsical to funny to serious as the group’s charade is interrupted by Qyburn who wishes to convey Cersei’s intention of contracting Bronn for killing Jaime and Tyrion for defecting to the other side and for treason, to which Bronn quickly retorts with cursing “that fucking family”. One of the lighter touches in an introductory episode, it also felt like a good return to GoT form, since, in all its appeal, this one was rather casual. 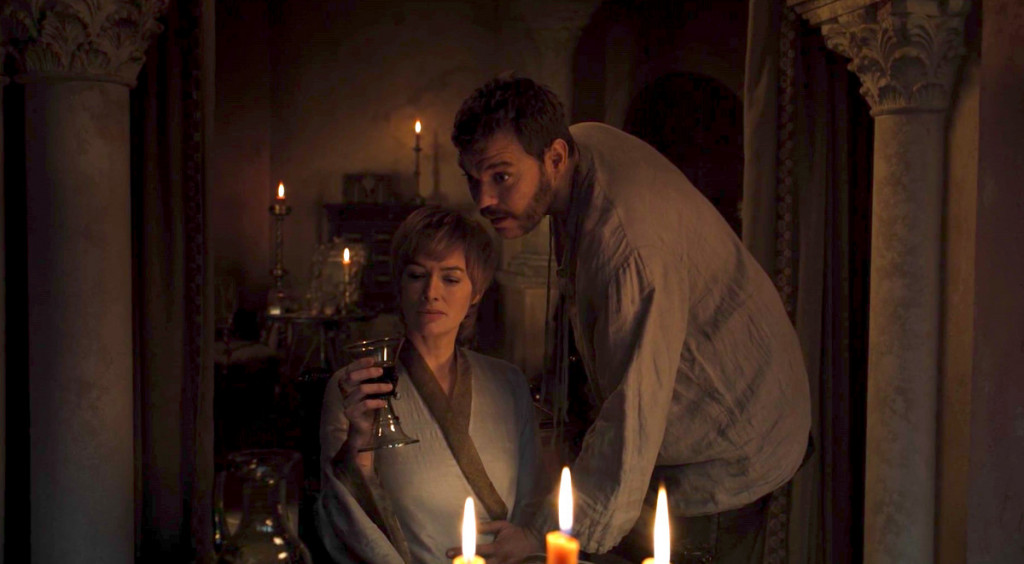 The second kind of sex scenes that GoT is famous for, ones that act out as important to the shape of the overall plot and may prove to be crucial later. However, for those looking for any kind of explicit content here are bound to be sorely disappointed. We all know one of the main reasons Euron came to King’s Landing and offered to help Cersei was that, in clearly stated terms, he wanted to sleep with her and make him his queen. While Cersei is initially reluctant, she eventually gives in to Euron’s advances and the two fornicate. The scene is so brief that even the “act” isn’t shown, and we only see the characters redressing after it. Now, Cersei’s pregnancy from Jaime, currently unknown to Euron is bound to throw a spanner in the works later, but until then, while this barely qualifies as a sex scene, it will bag this spot because it opens up quite a few possibilities. 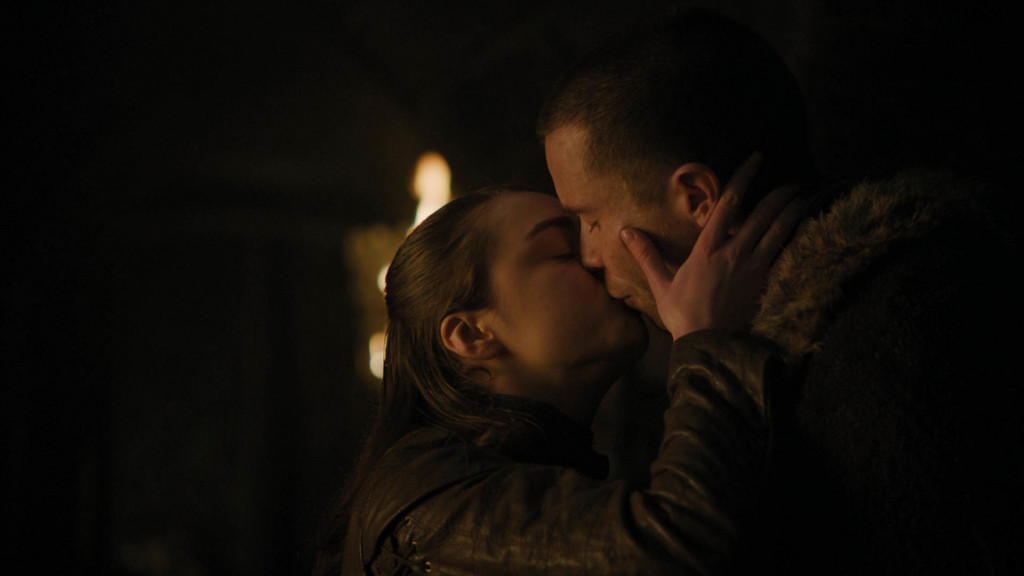 The most shocking moment from the second episode wasn’t a major character death or an unforeseen plot revelation. It was instead a completely WTF scene that came out of nowhere and damaged the collective conscience of one too many fans. If you haven’t guessed from the title already, the very scene I am talking about is the lovemaking scene between Arya and Gendry. In retrospect, it would feel like Arya was courting Gendry from the first episode when she sees him in Winterfell, something comes to fruition right before Arya feels that the world is going to come to an end.

Don’t get me wrong, it’s a finely executed scene with just the right amount of sensuality and dialogue, with nothing that can be particularly termed sexually distasteful. My only issue is the characters involved, and the situation in which this conspires. Perhaps I speak for myself, perhaps for a couple of other viewers, but every other person I watched this episode with happened to strongly agree that it felt out of place, and more importantly, out of character for Arya Stark, who has trained the last three seasons to become possibly the best assassin in Westeros and a complete badass. Her character arc is too well developed as of now for the writers to have her give into vices before a major war. It is quite natural that you wouldn’t at this conjuncture expect her to simply strip and make love to the local blacksmith, however erring as a human that might seem. In that, something tells me that this is a ploy and that bigger things are coming next episode, that she has a trick or two up her sleeve. She has to, rather, otherwise this just left a bad taste in my mouth. Sorry fellow fans, but it pains me just as much to write this.