Today, one of the most popular survival games out there is Funcom’s ‘Conan Exiles’. Based on the fictional world of Robert E. Howard’s Conan the Barbarian and the 1982 film of the same name, ‘Conan Exiles’ combines the romance of the sword and sandals era with a bit of magic and a whole lot of exploration as the game drops the player into a vast, unrelenting world to fend for themselves.

Players are afforded complete freedom to customize their character with a wide range of options including voice, gender, race, physical attributes and even the size of their naughty bits (yes, really). Once your character is created, you get to explore the vast and colorful world of Conan, embarking on many exhilarating adventures as you try to keep your character well fed and rested while simultaneously trying not to get mauled by the smorgasbord of savage wild animals, dragons and undead ghouls that roam the land.

‘Conan Exiles’ also gives you the option of playing with other players if you want, both in a competitive and a cooperative capacity. If you enjoy ‘Conan Exiles’ or are intrigued by survival games genre in general, you must give the following list of similar games a try. You can play these games like Conan Exiles on PS4, mac, Xbox 360, Xbox One and even online. 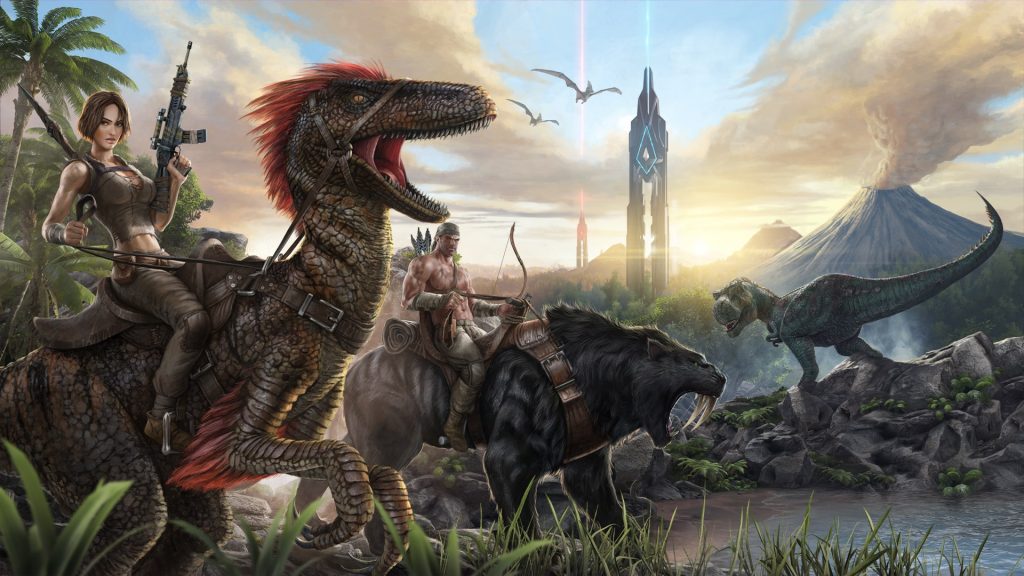 ‘ARK: Survival Evolved’ is the single most popular survival game on the market today, with concurrent player counts easily topping 60,000 during peak hours. Developed and published by Studio Wildcard, ‘ARK: Survival Evolved’ is an action-adventure survival game that drops the player onto a remote island populated by prehistoric dinosaurs and mythical creatures of a ravenous appetite. The player is then tasked with surviving the island’s numerous and varied attempts to kill you, whether it is by hunger, thirst, a violent disagreement with a fellow human player or being eaten alive by a Tyrannosaurus Rex.

If you wish to remain in one piece for long, players must harvest resources like food, water, wood, stone, metal etc., build a shelter and research gear upgrades in order to unlock new tools, weapons and armor.

If all these features already sound incredibly appealing to you, wait till you find out about ARK’s ace in the hole – the ability to tame and ride dinosaurs. Depending on your character’s level and power, the game allows you to capture and train all sorts of monsters found around the game world. Imagine the feeling you might get soaring through the clouds on the back of a Pteranodon, or trampling your enemy’s puny house astride your pet T-Rex. Well, the good news is that with ‘ARK: Survival Evolved’, you don’t have to imagine anymore.

‘ARK: Survival Evolved’ is available on all the popular platforms, including PC, macOS, Linux, PlayStation 4, Xbox One, Nintendo Switch, Android and iOS. 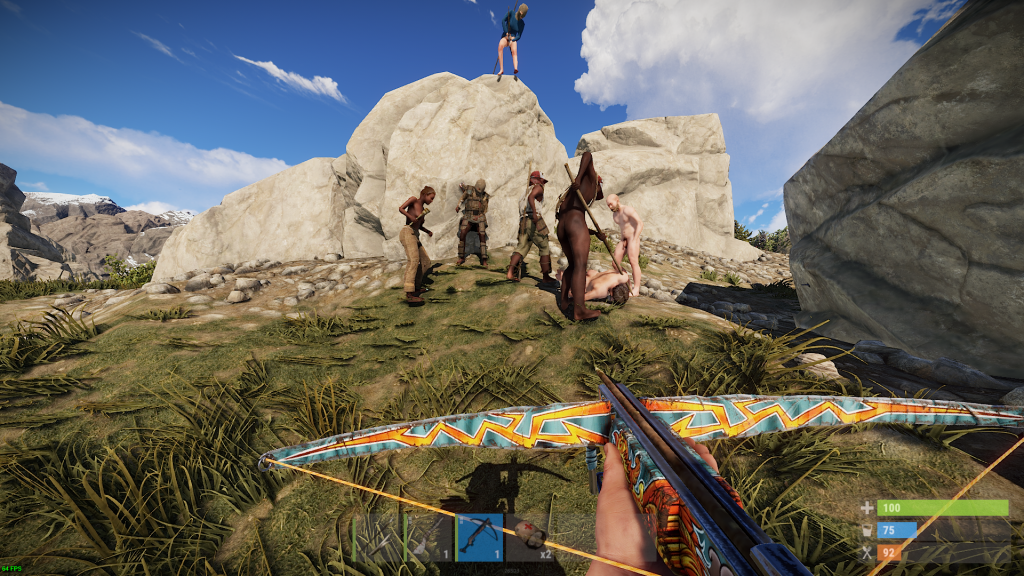 Developed and published by British game developer Facepunch studios, ‘Rust‘ is a survival game heavily inspired by ‘DayZ’. Like many other similar games in the genre, the basic objective of ‘Rust’ is to gather materials, craft tools and weapons, build a base and manage your character’s hunger, thirst and health. You start out with a rock and a torch, and you must go about gathering materials in order to craft superior gear.

However, unlike the likes of ‘ARK: Survival Evolved’ and ‘Conan Exiles’, this game opts for a more grounded and realistic setting. Instead of dinosaurs or dragons, ‘Rust’ features wolves and bears, who despite being a rather uninspired choice, are just as effective at depriving your character of life.

However, what sets ‘Rust’ apart from its peers is its multiplayer only nature. While the likes of ‘ARK: Survival Evolved’ and ‘Conan Exiles’ offer single player experiences as well, ‘Rust’ is built from the ground up to provide the optimal multiplayer experience. Players are encouraged to join clans (clans are basically groups of players who share a common base, resources and organize collective raids on opposing clans) and the raiding mechanic is at the front and center of the game. Large clans often face off against each other in epic battles for control of valuable resources, strategic locations and palatial bases.

‘Rust’ is available to play on PC and macOS. 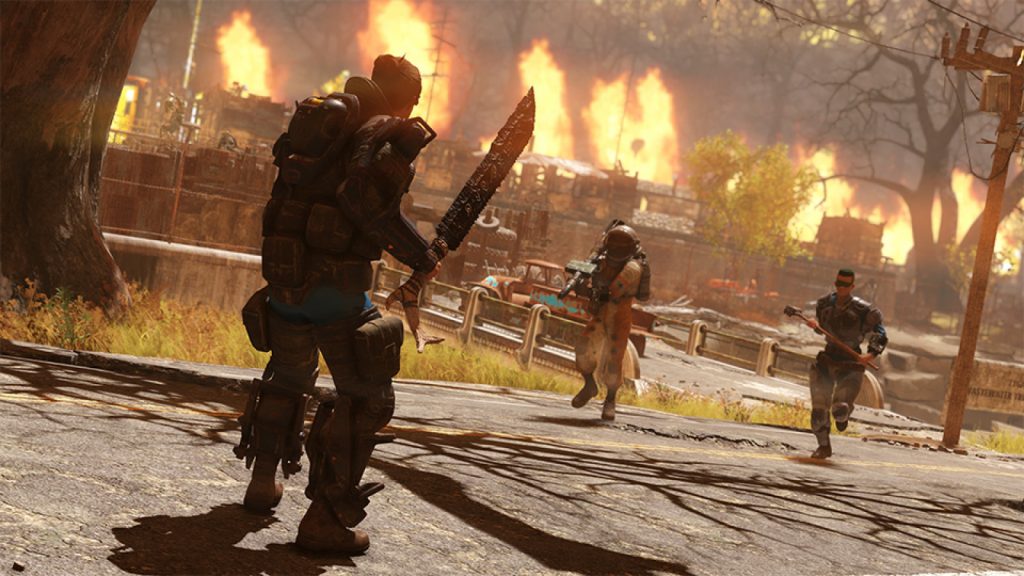 The newest entrant in Bethesda Softwork’s much vaunted Fallout franchise, ‘Fallout 76’ is a bit of a departure from the series’ usual formula. As with the older ‘Fallout 4’ and ‘Fallout: New Vegas, ‘Fallout 76’ is an action role-playing game set in the post nuclear American wasteland. This time the game is set in a region called Appalachia (inspired by West Virginia), and it is populated with all manner of grotesquely mutated abominations and humans who somehow manage to be worse.

All the great Fallout gameplay features make a comeback here, including the ridiculously extensive character progression system, base building mechanic, V.A.T.S. shooting mechanic and the awesome power armor suit. However, unlike its predecessors, ‘Fallout 76’ is the first ever online multiplayer only game in the Fallout franchise. Players can play in parties of up to four players, or they may opt to go solo.

The game also gets completely rid of all Non Player Characters (NPCs), meaning that every other character that you encounter in the vast open world of ‘Fallout 76’ is another real player. Bethesda recently announced a new subscription based service for ‘Fallout 76’ called “Fallout 1st”, so now may be the perfect time to dip your toes back into the world of Fallout.

You can play ‘Fallout 76’ on PC, PlayStation 4 and Xbox One.

‘The Forest’ is a survival horror video game developed and published by Canadian developer Endnight Games. You take control of Eric LeBlanc, who finds himself in an unknown, heavily forested peninsula in an unknown area along with his son Timmy after their plane crashes. However, before long your son is kidnapped by a mysterious man, and you are attacked by cannibalistic mutants indigenous to the region. Your mission then becomes to ensure your survival so that you can rescue your son. Since ‘Forest’ is a survival game, you will have to monitor your health, hunger and thirst levels incessantly, while gathering raw materials for crafting and upgrades.

While similar to ‘Conan Exiles’, in many ways ‘The Forest’ is a much more hardcore experience than the former. The enemies are more powerful, resource accumulation is slower, the atmosphere is creepier and the organic day/night cycle amps up the difficulty level even further during the night-time. Coupled with the intrigue surrounding the peninsula’s mysterious inhabitants, ‘The Forest’ can definitely lay claim to being a legitimate horror experience. While ‘The Forest’ does offer the option of cooperative multiplayer for up to four players at a time, it lacks any sort of competitive multiplayer component.

‘The Forest’ is available to play on PC and PlayStation 4.