10 Games You Must Play if You Love ‘Minecraft’

An adventurous action game at the outset, ‘Minecraft’ essentially has the sandbox genre to it, meaning one can make the game flow their way if they could. It is not although the first time when we’ve come across a world-building game like ‘Minecraft’. Despite many could-be’s and might have been’s, ‘Minecraft’ has evolved over the years to boast of having one of the best gameplays in its category, although we do know of many good alternatives, some of which are better than ‘Minecraft’ in many aspects.

The game stands out as one of the pioneering sandbox games with minimal graphics, everything seems lego-like and the player has to be adept, inventive, exploratory and innovative enough to save and gather resources by any means possible, save for a rough night, and fight the adversaries. Because there’s not one single way to do it, there’s no correct answer and there lie the immense possibilities. The gameplay often consists of various modes, in addition to the custom modes where the player can adjust for capabilities, difficulty and the consequences of a given set of actions. The steals of the game rests in the USPs like unlimited adventure and abilities to explore unhindered, along with the satisfaction of garnering more and more resources and making advances against adversaries.

Games like ‘Minecraft’ can include its clones (i.e. games that were spawned after the tremendous success of the game with slightly different characteristics but they are mostly the “same wine in a different bottle”), the games with minimal graphics but maximum adventure, limited time setting, unlimited resources and exploratory capabilities etc. Also, such games may involve first and third person views, nail-biting combats, customizable terrains, surroundings, features, animals or figurines, or the driving force or the survival instinct that pulls the gameplay forward.

Here is the list of video games similar to Minecraft that are our recommendations. You can play these open world games like Minecraft on mac, PlayStation 4, Xbox 360, Xbox One or even online. 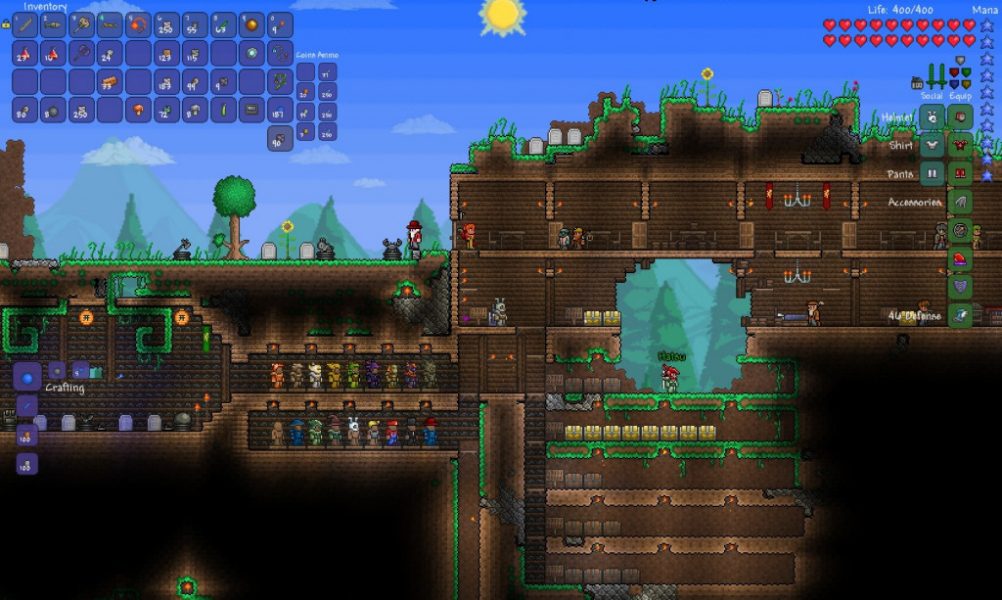 Call it a 2D ‘Minecraft’ or call it a “watered down” clone, Terraria has still got some fuel in it regardless. Not only the adventure sandbox game resembles ‘Super Mario’ – the classic Nintendo video game, it also has the vastness of ‘Minecraft’. The player can use a pickaxe, an axe or a sword for digging, gathering wood, and combat initially, while picking and gathering other resources, more combat weapons and performing chemistry-like crafts wherein the inputs have to be combined together for a desirable output –  another product, if you will. The gameplay looks simple with a comprehensive workbench of resources to choose from and the enemies are aplenty, ranging from zombies to huge bulging eyes. Terraria will make sure to keep you engaged for a while, with its millions of possible outcomes. 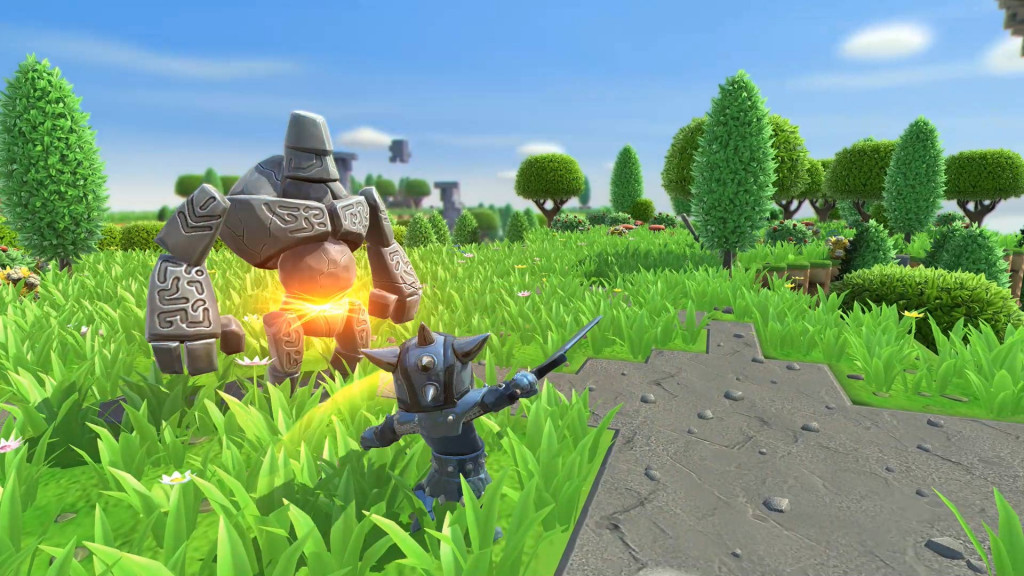 ‘Portal Knights’ has many elements inherited from ‘Minecraft’ but also has a lot of new stuff – not to mention the vibrant colours and the floweriness associated with it. The graphics are a lot better when compared with ‘Minecraft’ and so is the ease of playing. The player starts either as one of these – a warrior, mage or a ranger and the gameplay constitutes of re-building the lost portals to connect the islands (apparently these islands were once connected but now that the portals have been decimated, we’ve to collect the shards and rebuild them as a player). The enemies range from skeletal beings to beasts who are difficult to beat. The one absolute highlight is the catchiness associated with the game. 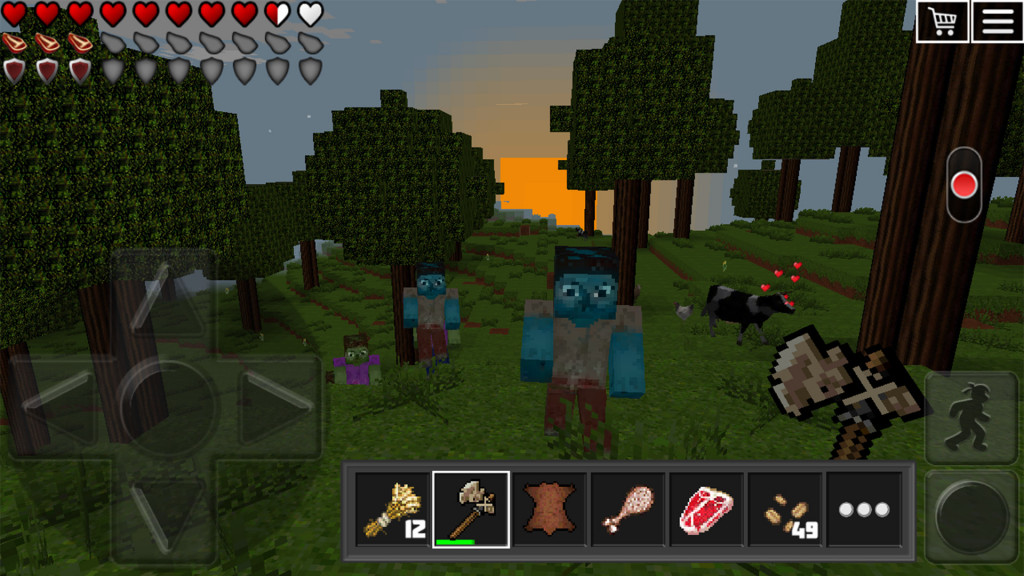 This free sandbox 3D block craft game lets you build anything you want in either single or multiplayer modes. You have the option to choose from one of their inbuilt maps or custom create your own. Moreover, because you’ve to survive the nights, you need to rush things up. Depending upon the mode you start with, you will have different alternatives and resources. Also, though the interface resembles ‘Minecraft’ a lot (it can easily be called a clone of the latter), the graphics are a notch better and so are the adversaries – at the least, you can clearly identify what’s what. The game is available on most of the mobile platforms for free if you leave aside the advertisements which are a major turnoff in any case. 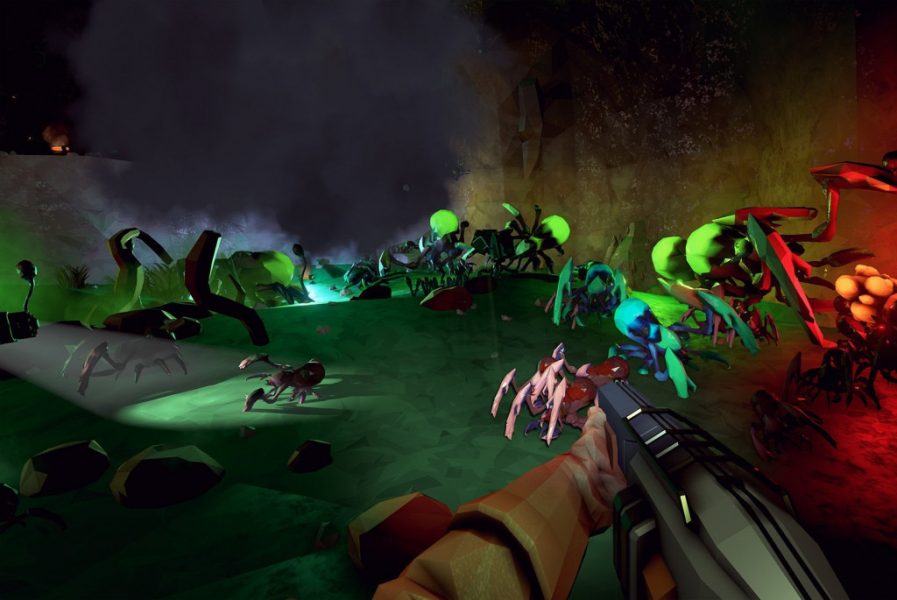 More like a “deep-space mining” game, I adore ‘Deep Rock Galactic’ for mainly two reasons – the fast-paced action with all the involved thrill and the FPS kind-of setup which I have always had a liking for. As a player, you’re a bearded space-dwarf (yes, like those in ‘The Lord of the Rings’, but donning a space-suit – weird but funny) who is entrusted with a task of exploring the caves of an unknown planet/terrain. ‘Deep Rock Galactic’ also offers better, stronger adversaries, Unfortunately, digging and exploring are the only elements it derives from ‘Minecraft’ which makes it look more like a spin-off of the game, but a good one nonetheless. 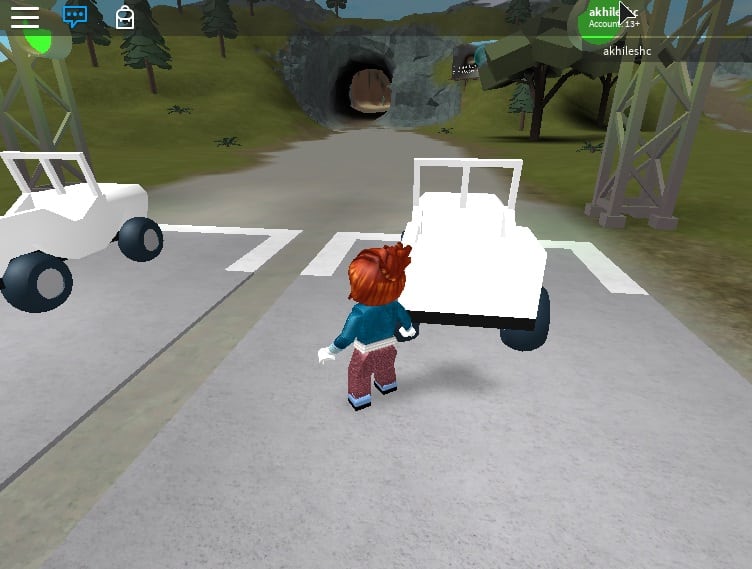 An online multiplayer game at the outset, a very few would’ve known that ‘Roblox’ can be played without paying a single penny here. You, as a player, can choose either from the templates (like Baseplate, Flat Terrain, City, Castle etc.) or create one. You can also get paid if you’re really good at virtual “world-building”. As far as the gameplay is concerned, there is practically nothing you can’t do – you can either be a racer in a racing module or a soldier in a war-like setup. ‘Roblox’ is perhaps the first fully programmable gaming application (that’s right – even the programming interface looks pretty damn serious and thoroughly customizable) which lets you explore your thoughts the way you want to. The best part about the game is the attention to detail – the deeper you delve, the better it gets. 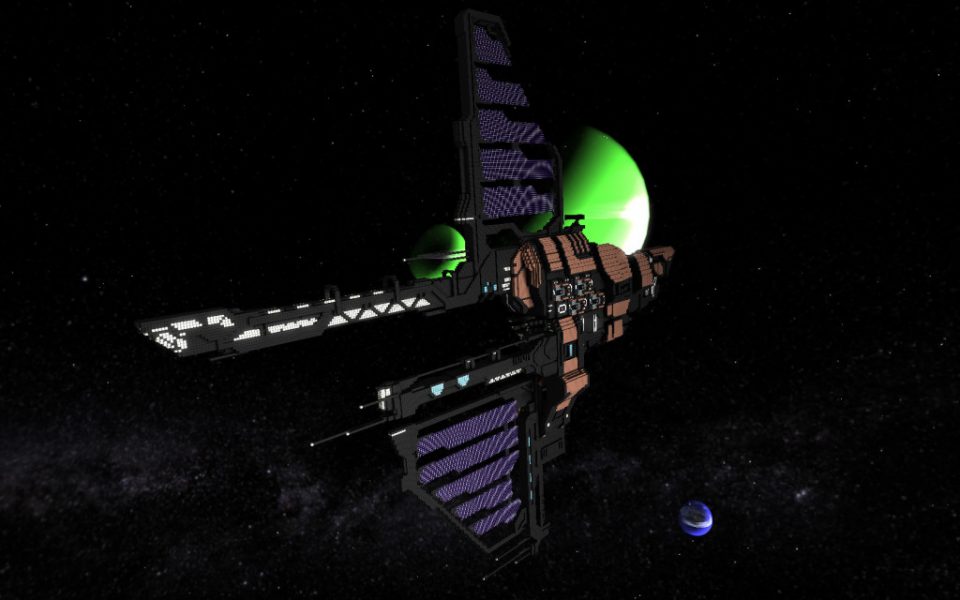 Although ‘StarMade’ is inherently a block game, the whole thing happens in deep space thus rendering a lot of freshness over the same old digging and collecting. Basically, it is a galaxy of stars, planets and asteroids you’re dealing with as a player and you get to build spaceships using factory blocks or salvage the remnants of a spaceship to build your own. Occasionally, you also get to go to these asteroids or planets and manufacture stuff up over there or use them as a resources point. Long story short, all this business has to be accomplished to fend off space pirates – the only hostile beings in the universe. StarMade is ‘Minecraft’ in space and on land (occasionally), with slightly better visuals throughout. 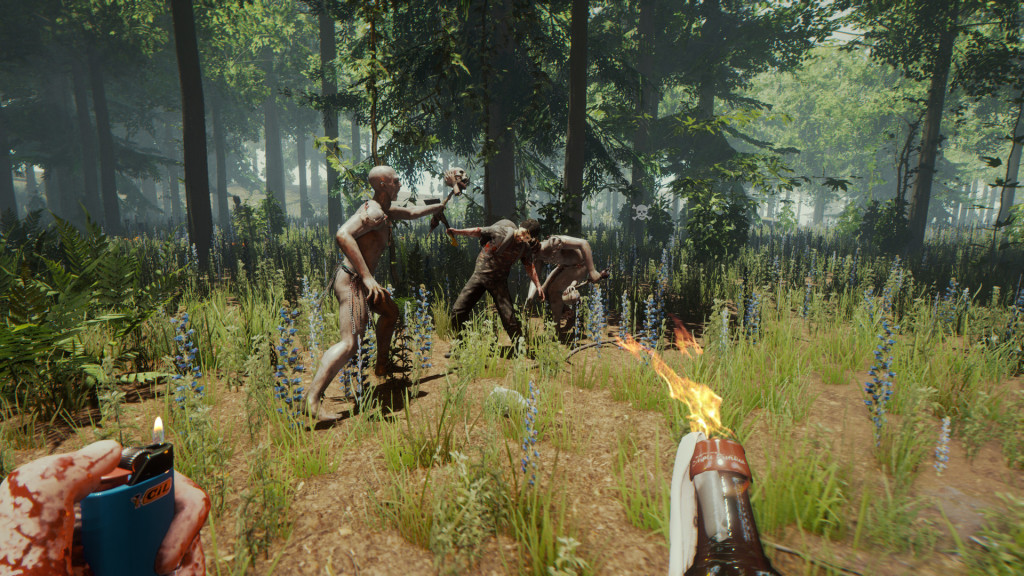 A survival game to start with, the reason I liked ‘The Forest’ was because of the fact that you as a player will have only one mission – survive and save your a*s. The premise starts with you and your child (shown in a first-person view) inside a plane when the plane crashes and you see your child taken away by a man. You wake up the next day and scrutinize the available resources (like the luggage-bags, the trees, etc.) using an axe, collect the available ones and look for any adversities. The nightfall usually results in zombie attacks and likewise, and you are supposed to prepare yourself by building ample defences and having enough resources to see the light of the day. An intriguing game with a lot of thrill and a sustained suspense throughout. 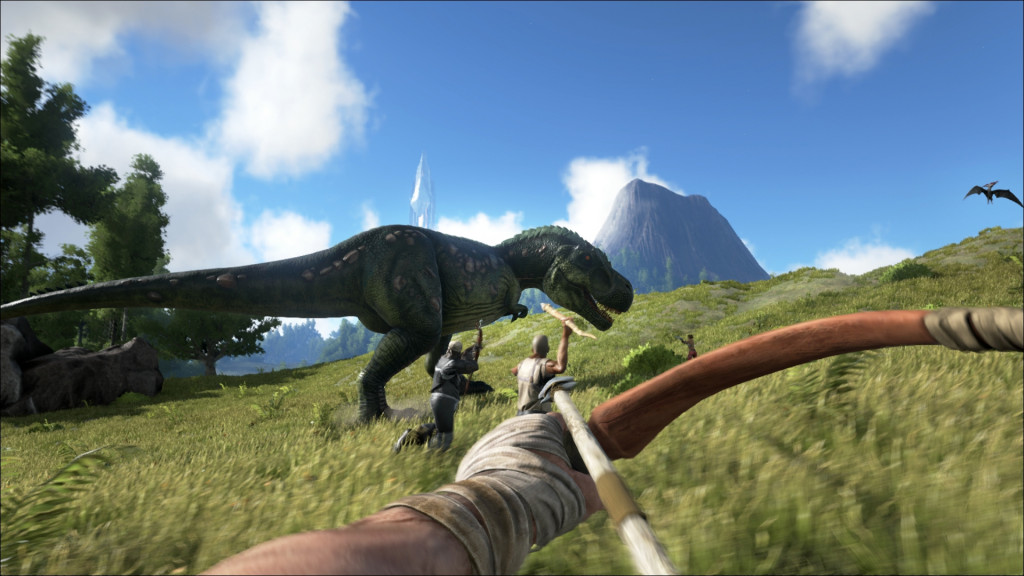 How do you like dinosaurs? Or any other extinct, wildly dangerous, humongous animals for that matter? If you do, then ‘Ark: Survival Evolved’ is the game for you. Yet another action-adventure-explore-survive game on this list, as a player, you’re in the world of Ark where you need to survive using the tools available to you along with the stamina, food, oxygen etc. that you have. The best part is – you get to tame these prehistoric animals, which also comes with a warning as the animal that you’ve tamed might be attacked and eaten up by another “bigger” animal which is up in the food chain. The ultimate goal, however, is to gain maximum stamina, resources, health, oxygen, food etc. to be able to defeat the hostilities. ‘Ark: Survival Evolved’ beats ‘Minecraft’ in many ways and is far more complex and innovative. The only limitation, when compared to ‘Minecraft’, is its limited abilities to build, explore or fight, which is okay given the brilliant overall experience. 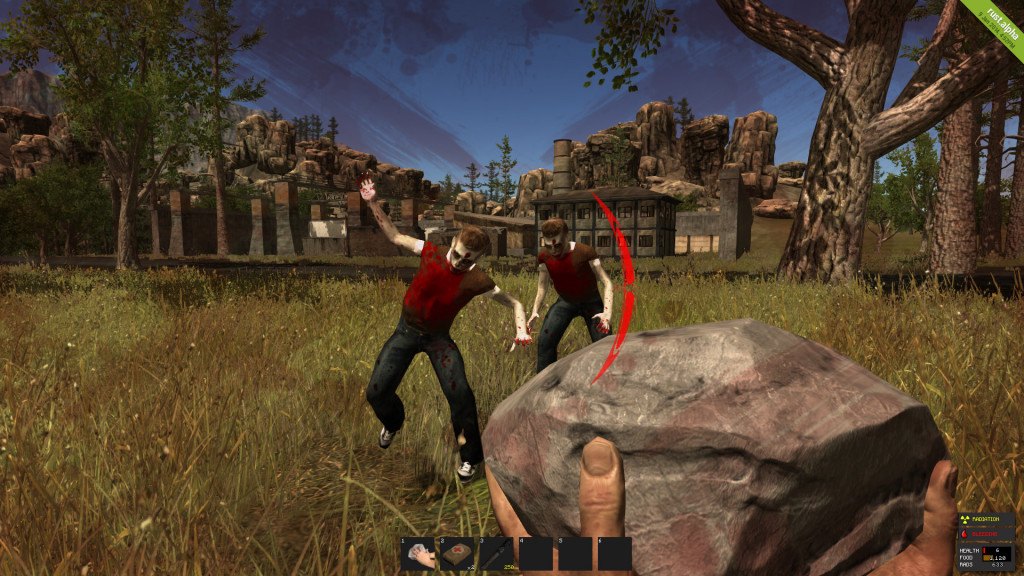 To start with, you are a naked man in a vast expanse of land with only a rock and a burning torch to conquer your area and survive. The only limitation, or perhaps the greatest intent, of ‘Rust’, is that every game is a multiplayer game – yes, there are many others like you, trying to survive themselves by killing you and/or stealing your resources. Because it is a multiplayer game, you can join hands with others or kill them – doing the latter entails a lot more fun (in the game only. Wink!). As you wield the rock to fell trees or kill other players, you also gain more resources like axes, bows, makeshift guns etc. Then there’s a helicopter which drops weapons and supplies every now and then and one must rush to grab the falling parachutes before stocks last. The idea is to survive, kill the bears or the wolves that get on the way, join hands with other players, build bases, keep selves well-fed and win over the other clans. Pretty simple, huh? 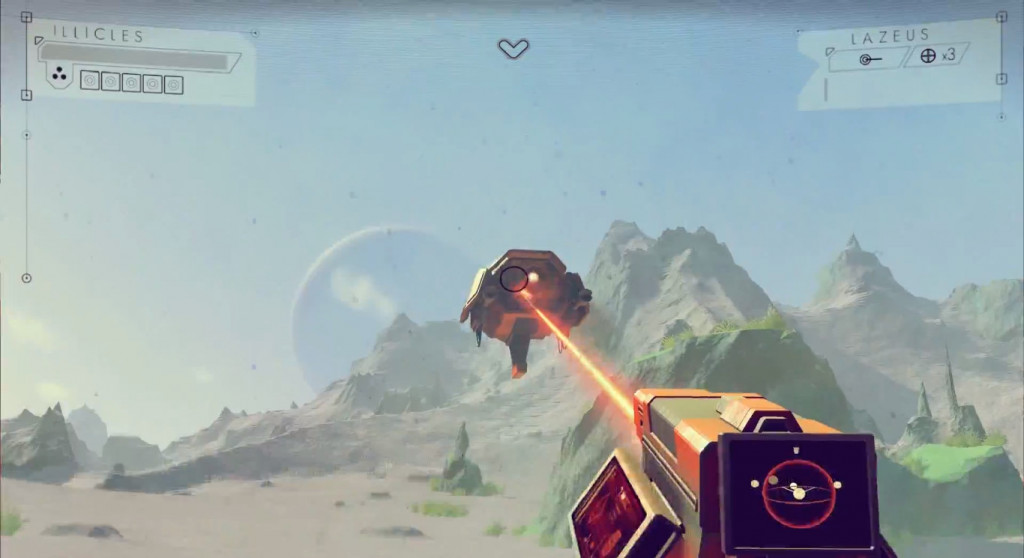 You’re a planet explorer. And a survivor. And a fighter. A trader too. And there are infinite possibilities of the following – the number of planets, the alien species, the possibilities of the galaxy you’d crash onto, the terrains, atmospheric conditions, the resources and the combinations of all of these. Simply put, you will never see a particular combination of all of these elements together again, despite however many times you play the game. As far as the gameplay is concerned, you’re an interstellar traveller wearing an exo-suit, who has landed on an uncharted, unknown territory. The onus to survive and to save your own and that is totally up to you. You’ll have to protect your exo-suit, else you’d wear down and die, have to build an inventory of resources to survive and fight the alien species on the planet, and also the weirdest of the robots using laser-guns or similar weapons, and you can trade the resources available with you against any others at the local space-station (psst – there’s a space station around in each planet). And that is all you need to do. If you play this game only once, and if you’re or have been a fan of ‘Minecraft’, ‘No Man’s Sky’ will never leave you again.