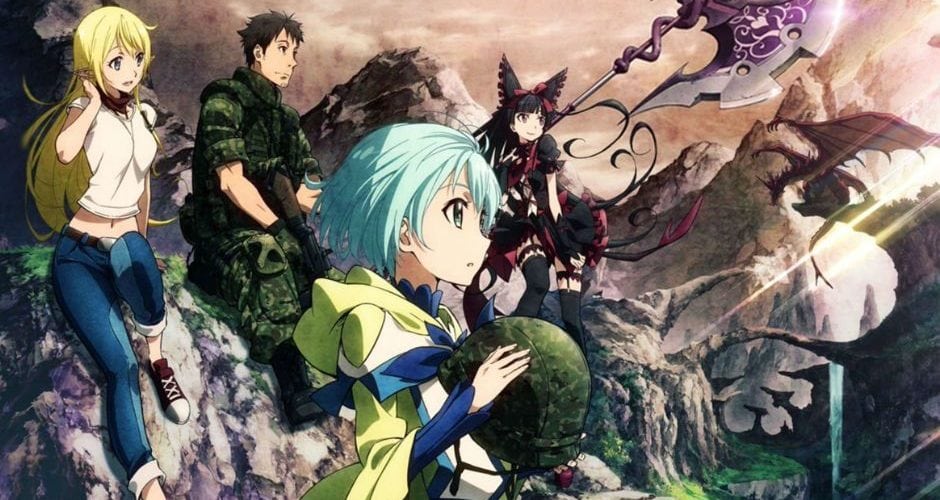 Gate (also known as Gate: Jieitai Kanochi nite, Kaku Tatakaeri in Japanese) is a Japanese fantasy anime television series which is based on a light-novel series of the same name. Written by Takumi Yanai and illustrated by Daisuke Izuka and Kurojishi, the light novel series was first published on April 12, 2010, with the final volume being published on December 22, 2011. Even before the light-novel series was finished, it was adapted into a manga series illustrated by Satoru Sao in July 2011. Since then, three spin-off manga series have been released based on the original. Understandably, Gate enjoys a lot of popularity and it was not surprising at all when it was picked up to be made into an anime television series.

Season 1 of Gate was released five years after the publication of the light-novel series, and it premiered on July 4, 2015. It was an immediate hit among fans of the source material and new viewers alike, and the show makers wasted no time in renewing it for a second season. Subsequently, Season 2 of the show premiered less than a year later, on January 9, 2016. Since then, fans have been waiting to hear news on a third season. Here’s everything we know about the prospects of Season 3 thus far.

Gate Season 3 Release Date: When will it premiere?

Gate Season 2 premiered on January 9, 2016, and the season finale was aired on March 26, 2016. While fans have been demanding the third season, Season 3, unfortunately, has not been announced as of now.

However, that’s no reason to get disheartened. Anime shows function differently than US television shows, and sometimes, the gap between two seasons can be as long as five years, if not more. Hence, there’s plenty of time left for the show makers to renew Gate. Our best guess is that Gate season 3 release date could fall sometime in 2020 or 2021.  We’re keeping our ears open for news on Season 3 of Gate, and we’ll update this section as soon as we hear something.

You can stream ‘Gate’ on Crunchyroll, Amazon, and AnimeLab with original Japanese audio and English subtitles.

The show is a fantastical and one, and blends the modern with the fantastical. One day in modern day Tokyo, a portal from another world opens up, and through it, soldiers and monsters arrive in Japan, launching a full scale invasion on Earth. Caught by surprise, Japan is hardly able to mount a defence against the invaders, who quickly turn the district of Ginza into a blazing inferno.

In the immediate aftermath of the invasion, the Japanese Self-Defence Forces (JSDF) mount a brave and ambitious counterattack, pushing the invaders back into the portal, referred to as the Gate. Having pushed the invaders out, the JSDF also capitalizes on the opportunity, and establishes a forward operating base (FOB) on the other side of the Gate so that it can recon what’s on the other side and make requisite preparations for negotiating with the invaders.

Although everything goes Youji’s way initially, things change drastically when he ends up discrediting Crown Prince Zorzal. Humiliated and insulted, the Crown Prince takes it personally, and mounts a coup. He takes command of the armies of the Special Region, and decides to make Japan pay in blood. By camouflaging his troops in imitation uniforms, he starts to wreak havoc on the locals, with the aim of getting them enraged and declaring an all-out war on Japan.

However, the Japanese forces remain undaunted, and launch a daring rescue mission to liberate Princess Piña Co Lada, Emperor Molt Sol Augustus, and anti-war senators from the Imperial Capital. This shifts the tide of the battle to their favour, and Crown Prince Zorzal goes into hiding, deciding to wage war in the form of guerilla warfare. With a full-blown civil war raging in the Special Region, the Japanese forces have another complication to deal with – the Gate which links to the two worlds unleashes a series of devastating events in the Special Region, and Earth begins to drift away from the mutual anchor point. Thus, the JSDF task force has to bring the civil war to a swift end to ensure that they can return home safely while leaving the Special Region in peace.

Rory Mercury: A demigoddess of the special region, Rory is another main character who is revealed to be an apostle of Emroy, the god of violence, war, and death. Known as the Reaper, Rory has a reputation of being extremely powerful in combat, and shows no mercy to her adversaries. Yet, despite her fearsome reputation, Rory is shown to have a friendly personality, and quickly befriends Youji when he steps foot in the Special Region and starts helping the locals. Rory is also shown to have a strong sense of justice, and is violent and sadistic towards wrongdoers like bandits while being benevolent and friendly towards the common folk. Later on, she falls in love with Youji.

Lelei la Lalena: A sage and a sorceress of the human race, and the second disciple of an elder sage called Cato, Lelei is an extremely knowledgeable and talented person. However, she rarely shows emotion.

Tuka Luna Marceau: A descendant of a superior race of elves, Tuka used to live in the village of Kowan until it was destroyed by the ancient dragon. She was the sole survivor of the attack, and plays an important part in the show.