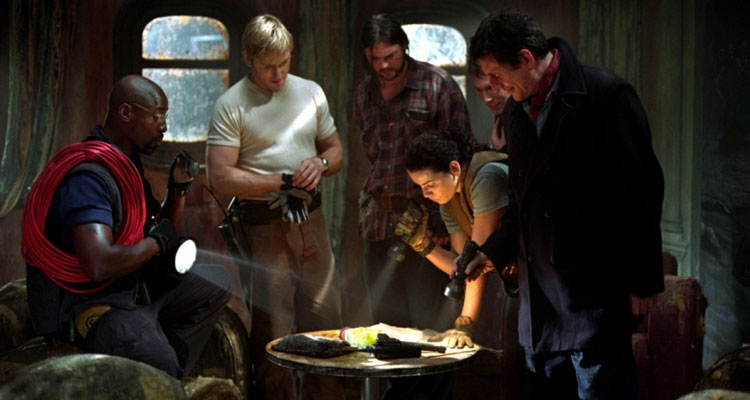 A Steve Beck (‘Thirteen Ghosts’) directorial venture, the 2002 film ‘Ghost Ship,’ is an interesting combination of horror and ocean adventure. Released in the pre-‘Pirates of the Caribbean’ world, the film can be very well credited for establishing the subgenre. Upon its release, it received mixed reviews from the critics, with a few praising the film’s visual style and urgency in the storyline. It tells the tale of a salvage crew, led by Sean Murphy (Gabriel Byrne), who learns about a drifting ocean liner from a weather service pilot named Jack Ferriman. After they get on board the ship, they all begin experiencing supernatural events, leading them to believe that the ship is haunted. SPOILERS AHEAD!

The film opens in 1962 onboard the ocean liner SS Antonia Graza. A lounge singer named Francesca (Francesca Rettondini) performs ‘Senza Fine’ while the crew and the passengers dance with each other. Katie (Emily Browning), a young girl traveling to New York to be with her family, begins dancing with the captain himself. Someone triggers a thin wire cord to break and pull across the dance floor at an incredible speed, severing limbs and other body parts of all who are present, except for Katie. She survives because she isn’t tall enough.

In the present time, Murphy and his crew are extremely competent at their job. The moment they step on to the Graza, odd and bizarre things start happening around them. The film’s cast also includes Ron Eldard as Dodge, Desmond Harrington as Jack Ferriman, Isaiah Washington as Greer, Alex Dimitriades as Santos, Karl Urban as Munder, and Julianna Margulies as Maureen Epps. Their initial plan is to tow the seemingly deserted ocean-liner and deliver it to a scrapyard, where it can be taken apart for profit. Munder nearly dies when the floor underneath him gives in but is saved by Maureen. This is when she first sees Katie.

She and Ferriman find nine wooden boxes, each of which contains twenty-eight 100-oz gold bars. The crew decides to leave the ship and take just the gold with them. But as they are about to leave, some malevolent force causes a huge explosion in the salvager’s tugboat, the Arctic Warrior, completely destroying it and killing Santos. The crew realizes that they now have no choice but to repair the ocean liner. As their stay on the eponymous ship is prolonged, Murphy and others start having supernatural experiences.

Among the remaining salvagers, Greer is killed first. Francesca’s ghost appears before him. He tries to stay faithful to his fiancée but fails. She lures him to an empty elevator shaft. As he lunges to grab hold of her, he goes through her ghostly form and falls down the shaft and is impaled on the steel wires at the bottom. Troubled by Santos’ death, Murphy starts drinking in the captain’s cabin. The captain’s ghost appears before him and tells him what transpired on his ship.

They had rescued a single person from the sinking cruise ship the Lorelei, along with the gold. He then proceeds to give a photo of the survivor. As Murphy goes to inform Maureen and others, he begins hallucinating about Santos. When Maureen arrives there, he attacks her, believing her to be Santos. He is then subdued by Ferriman. They, with the help of Munder and Dodge, place Murphy in an empty fish tank.

Who Is Jack Ferriman?

It is Katie who ultimately reveals the complete truth to Maureen. She helps her find Greer’s body and tells her what happened on the ship. The sole survivor from the Lorelei manipulated a section of Graza’s crew to kill the rest of the crew, as well as the passengers. Their leader then gunned down his own men, and in turn, was shot by Francesca. It is then revealed that Jack Ferriman was behind all this. After he killed Francesca with telekinesis, he branded her with a unique hooked-shaped mark, which helps him control the souls.

Katie, being an innocent child at the time of her death, couldn’t be marked and has more independence and agency. Maureen runs to find Murphy but discovers the tank flooded and him dead. She finds Dodge and tries to explain that Ferriman came after them, so they can repair the ship for him, but Ferriman shows up there as well. She tells them to stay together as she goes to search for Munder and gives Dodge the shotgun, indicating that he should keep an eye on Ferriman. Munder dies by being sucked into the ship’s gear.

When Ferriman tries to mock Dodge for his unspoken feelings for Maureen, Dodge shoots him. He later approaches Maureen while she is placing explosives all over the ship. He informs her that he has killed Ferriman and says that they should use the gold to start a life together. Seeing right through the ruse, Maureen asks him why he hasn’t enquired about Munder. Dodge transforms into Ferriman and reveals that Dodge is dead, and he knows that Munder is as well. Interestingly, his surname gives a clue to what he truly is.

As he explains to Maureen, after a lifetime of sin, he became a salvager of souls. He has a quota to fill and uses Graza to gather the souls. This is why he needed Maureen and others’ help. After they had fixed the ship, he could have continued harvesting souls. He and Maureen struggle before she detonates the explosives, seemingly destroying the demonic being. She then swims away from the sinking Graza with Katie’s help. Katie and others are finally free to advance to the afterlife.

How Is Ferriman Still Alive?

Maureen is picked up by a passing cruise ship. After she gets back to the land and wheeled into an ambulance, she spots some crew members taking the crates of gold onboard the cruise ship and Ferriman accompanying them. As she screams in horror, the film ends. It has already been established in the film that Ferriman is an immortal being. A gunshot from Dodge didn’t kill him, and evidently, neither did the explosion. His superiors, or “the management” as he calls them, likely have sent him back to Earth to harvest more souls for them.