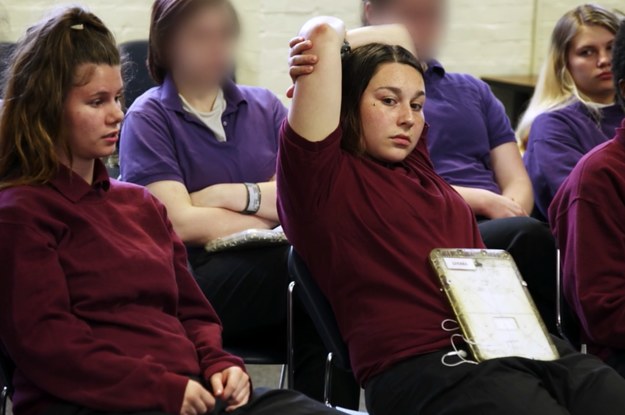 ‘Girls Incarcerated’, officially known as ‘Girls Incarcerated: Young and Locked Up’, is an American documentary reality television series that follows teenage girls who are locked behind bars. This documentary series first premiered on March 2, 2018 on Netflix. The show centers around teenage inmates who are kept in the Madison Juvenile Correctional Facility in Madison, Indiana. ‘Girls Incarcerated: Young and Locked Up’ is executive produced by Nick Rigg, Jordana Hochman, David George, and Bianca Barnes-Williams. It is an unscripted show that is well edited by Kimberly Pellnat and Dan Nelson.

Madison Juvenile Correctional Facility was closed down after the show aired. The life of these girls is highlighted even when they are in prison. Getting locked in prison can be very saddening for anyone, but it can especially be very difficult for young people. They miss out on some of the most important things that other teens enjoy with their family and friends. The series also shows the relationship between their fellow inmates. They also get to celebrate their high school graduation and birthdays inside the facility. The audience can get to see some romance among these young people.

The portrayal of life inside a prison has been a topic of interest for some time. People do not just want to know how the inmates spend their time, but it also serves to provide a look at the prison system of the country, the security, the way the powers of authority behave with the prisoners. Moreover, any hint of corruption within the prison walls always piques audience interest. While shows like ‘Orange is the New Black‘ have been successful in dramatizing the life inside prison, while still managing to remain accurate, it is actually a show like ‘Girls Incarcerated’ that takes us to the heart of the matter. Naturally, it has drawn a fair number of fans and critics too have praised the series for its adept handling of the content without coming across as exploitative or intrusive.

Girls Incarcerated Cast: Who is in it?

The main cast of the series includes the prison staff and the prisoners. For the initial season, the prison staff includes Officer Barnhardt, Officer Brightwell, Officer Bowen, Officer M. Crawford, Officer J. Coppage, Captain Polly Crawley, Officer Distel, Lieutenant J. Ehrnreiter, and Mrs. Goodwin among others. When it comes to the prisoners, over the season, the show has chronicled the lives of some fifteen plus inmates, but some stories are more relatable than others, of course, and some of the inmates manage to become fan favorites due to their stories and how they conduct themselves inside the walls of the juvenile detention center. Some of these include Brianna Guerra, who is 17 years old. Brianna is one of the first people viewers are introduced to and she is a self-proclaimed ‘bad girl’. She picks fights even if people look at her in the wrong way and has been in and out of juvie several times for an assortment of things including drug use, drinking, and armed robbery.

However, we soon get to know that underneath the tough exterior is a girl who wants to join the Navy and make her family proud. Taryn Twine, also 17, is one of the more exceptional cases. She has a solid academic record and a background in gymnastics and is not the kind of person one expects to see in juvie. She tries to help the others stay out of trouble, and on the straight and narrow. However, we learn that she has checked herself into juvie after she accidentally killed her friend in a car accident. It is devastating to see how she tries to process her guilt.

Girls Incarcerated Plot: What is it about?

Prisoner Brianna, who loves to act like a bad girl, knows that her behavior won’t be tolerated inside and it must change. New inmate Paige annoys a feisty Heidi in a teasing way. On the other hand, inmates Aubrey and Chrissy wait to get released from jail. As they get released, Aubrey gets into small trouble. The time for imprisonment is over for Najwa, but she can’t leave the prison without any guardian. Chrissy gets to start a new positive beginning with her family while Paige disappoints her family. Brianna and her inmate friends get into an argument with Faith. Inmates get to meet their families on Family Day. Sarah, whose mom is addicted to drugs, gets released and returns to Madison. Taryn used to blame herself for her friend’s death, but now she learns to forgive herself.

Alexis falls in love with Armani in the lockup. Armani had helped her to face her disturbing past. Chrissy tries to survive in the outside world while Brianna’s father fails to support her again. She is also unsure of her future when she comes close to her release date. Courtney joins the high school in Madison to graduate like other kids. Feisty inmate Heidi finally opens up about her past, and her release date gets changed whereas Alexis fears about losing Armani.

In Madison, Paige takes part in a talent show and shares a powerful poem, while Najwa enjoys her 16th birthday outside. This is the whirlwind of events that take place in the initial season of ‘Girls Incarcerated’ as the plot follows these troubled girls in the Madison Juvenile Correctional Facility in Madison, Indiana. In the second season, the show shifts its focus to the LaPorte Juvenile Correctional Facility and continues to break down emotional walls, celebrate milestones and romances.

Girls Incarcerated Season 3 Release Date: When will it premiere?

‘Girls Incarcerated’ Season 2 premiered on June 21, 2018. If you are a fan of real-life based gritty stories, this one is tailer-made for you. As far as the next season goes, we don’t have an official announcement yet. Though considering the fact that the show has a set structure and doesn’t require a lot of budget, we expect it to be renewed for another season. If that happens, our best guess is that ‘Girls Incarcerated’ Season 3 can release sometime in June, 2020. We will update this section as soon as we hear more.

While we wait for the next season to arrive, check out Season 1 trailer below. If you have not seen the show and are interested in knowing about the discourse surrounding juvenile detention in the USA, then don’t forget to check out this show.