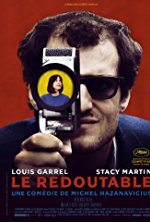 Plot: Originally titled Le redoubtable during its festival run, Godard, mon amour frames a pivotal moment in time and cinema’s most influential filmmaker, as he deals with his profound artistic crisis leading up to the unrest of May ’68. With cultural and political change in the air, Jean-Luc Godard (Louis Garrel) is reexamining his work, his relationship to filmmaking, and his muses. With his marriage to Anna Karina over, he finds his inspiration in student activist and actor, Anne Wiazemsky (Stacy Martin), who will star in his next project, La chinoise. Indiana University Cinema