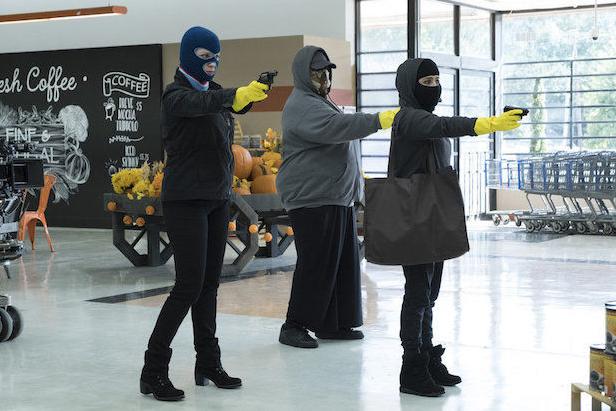 ‘Good Girls’ series has been renewed for season 3 at NBC. The popular series from creator Jenna Bans revolves around the three ‘Good Girls’ who plunge into the world of heist after a supermarket robbery. Christina Hendricks, Mae Whitman and Retta play the lead role of three women in action. On the ongoing second season, the women are seen haunted by their past crimes and present consequences.

Beth, played by Hendricks, brings the crime syndicate into her legitimate place of business, while Ruby, played by Retta, and her husband Stan, played by Reno Wilson, is cornered by the authorities. After an FBI intervention, Ruby is at the crossroads to choose between her family and friends. Annie, played by Whitman has her personal demons to deal with as her ex prepares for the arrival of a new baby. Manny Montana, Lidya Jewett, Isaiah Stannar, and Matthew Lillard also play key roles in the series. While Bans serves as the showrunner, Michael Weaver directs and executive produces season 3. Jeannine Renshaw, Mark Wilding and Bill Krebs also join the project as executive producers.

The series started modestly as a chronicle of three suburban moms who are on the verge of a nervous breakdown by trying to make both ends meet. Fed up with their meager circumstances, they decide to change the desperate lives and rob the nearby grocery store. But the store manager identifies one face and the women robbers land in trouble. Soon they realize that there is only one way to deal with it, to continue along the dangerous path that opened. But it is harder and brutal than they thought.

‘We’re so excited to continue following the friendship and adventures of these three incredible women while also exploring relatable issues in both funny and surprising ways,’ Lisa Katz and Tracey Pakosta of NBC were quoted as saying in a Variety report. ‘Congratulations to Jenna Bans, and our amazing writers, cast and crew who give these stories depth and humanity,’ they added.

Scoring well with viewers and critics alike, ‘Good Girls’ season 1 became the flagbearer of NBC’s comedic revival wave. The show was renewed for season 2 in March 2019 on NBC. The network managed to retrieve its dominance in the sitcom arena with ‘Good Girls’ and ‘Good Place.’ The first season of the series was aired by Netflix on January 1st, 2018. ‘Good Girls’ comes under Netflix’s co-licensing model which helped the series to land a Season 2 renewal. The streaming platform acquired the 10 episodes of the first season with a run time of 41 to 43 minutes each.

So far in the second season, ‘Good Girls’ has averaged a 1.1 rating in adults 18-49 with 4.1 million viewers. The show picks up a significant hike in the number of viewers and rating after its season premiere on March 3. The comedic timing of Retta and Mae Whitman is the trump card of the second season, which lacks a gripping plot as in season 1. The rating and popularity of Season 2 will be decisive in shaping up the nature of Season 3. Universal Television produces ‘Good Girls’ for NBC. The network, whose revival mode is on, has an impressive line-up for the coming season. The renewed NBC shows include ‘The Blacklist,’ ‘Chicago Fire,’ ‘Chicago Med,’ ‘Chicago PD,’ ‘Law & Order: SVU.’ and ‘New Amsterdam.’ NBC has given more importance to its flagship sitcoms such as ‘Brooklyn Nine-Nine,’ ‘The Good Place,’ ‘Superstore,’ and ‘Will & Grace.’