The Goriest Movie Scenes of All Time 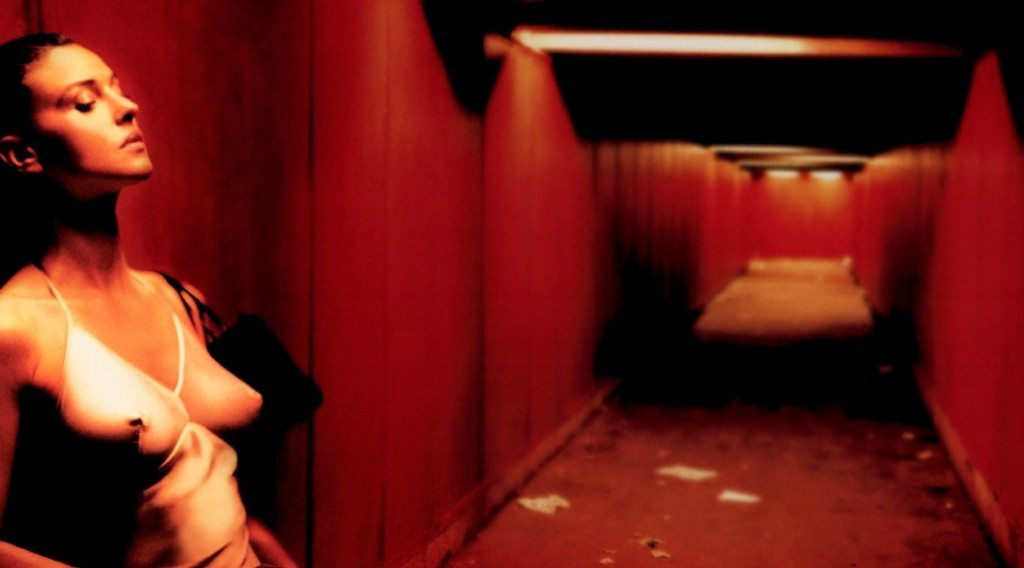 Everything that happens in a movie takes place within the dimensions of the screen you’re watching it on. At times, that can be quite saddening, especially if the films are set in worlds so utterly beautiful, yet completely out of our reach. Other times, it’s a sort of blessing, knowing that whatever you’re observing on screen stays there, and isn’t going to splat out into your living room. Violence and gore are elements of cinema that are quite necessary to plots of films in the action and horror genre, to both set the atmosphere and tell the story in as precise a manner as the filmmakers would like to. Subconsciously, all of us as humans are drawn to matters involving blood and violence, mainly because it heightens our curiosity. This is partly why we enjoy watching films that are abundant in such nasty gore, and here I shall try to explore the best of those moments in cinema. 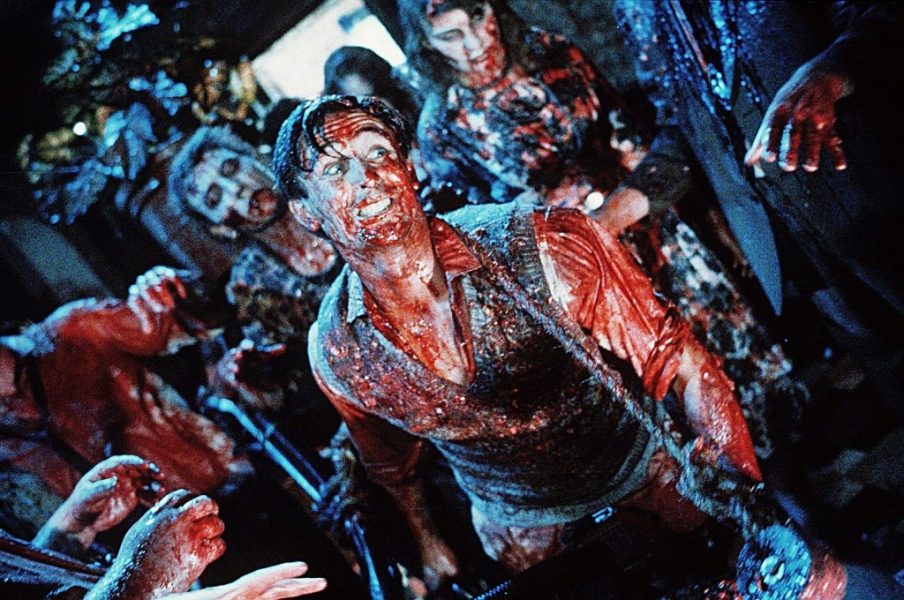 The amount of blood seen here is just unbelievable. Peter Jackson’s 1992 box office bomb is an underrated comedy horror that’s as innovative as it is gory. The scene in question takes place at a party, which is suddenly halted by a man with a lawnmower. He proceeds to walk through the huge crowd of people attending with the maniacal device running in his hand, and thus commences a bloody dismembering that’s both hard to watch and comical at the same time (in a dark way, of course). Limbs gush blood as they are painfully, though quickly severed from the bodies of people with the thick, strong blades attacking them. In this lengthy moment, there are arms, legs, heads, torsos, and whatever else you can imagine ripped off and kicked around on the ground, with zooms and push-ins heightening the intensity of the bloodbath ensued. It really is something else. 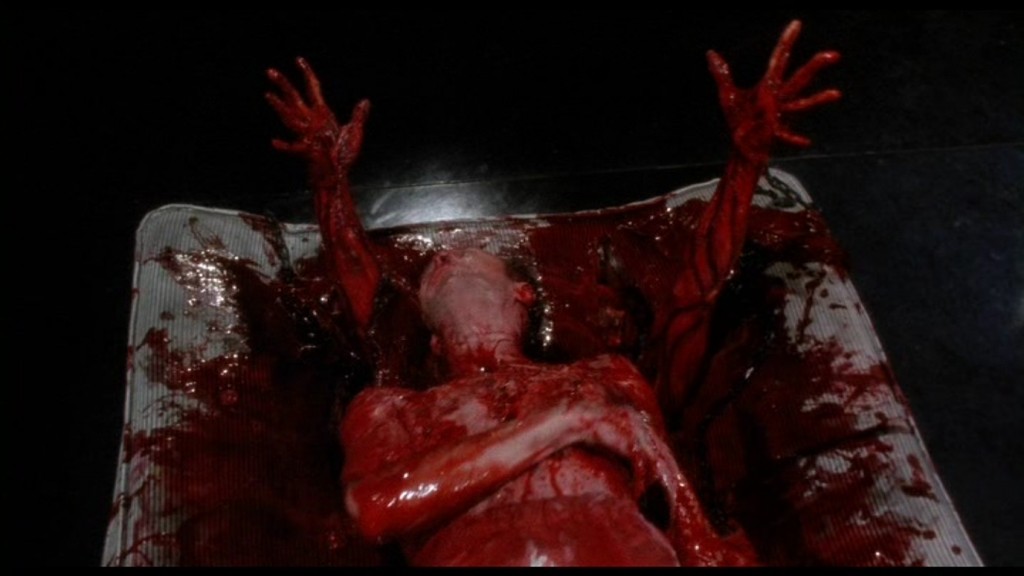 In the uncut version of this film, a man lies on a mattress, covered in blood, screaming in pain, when suddenly two arms stick out from under him. As the figure protrudes out of the mattress she is tearing, we see that there’s nothing but a collection of attached muscles, red and glistening. Then a chase ensues, slow-paced and on the ground (but nevertheless heart-racing) between the figure and the man, both crawling and aching in terrible pain from out the bed. Following this, in the midst of their screams, the figure catches up with the man and injects her fingers into the back of his head, all covered in blood and effectively killing him. She then turns and falls back onto the ground, tired and reviving from the stinging pain, and utters the words “help me”. The two players in this scene are covered in blood throughout its entirety. 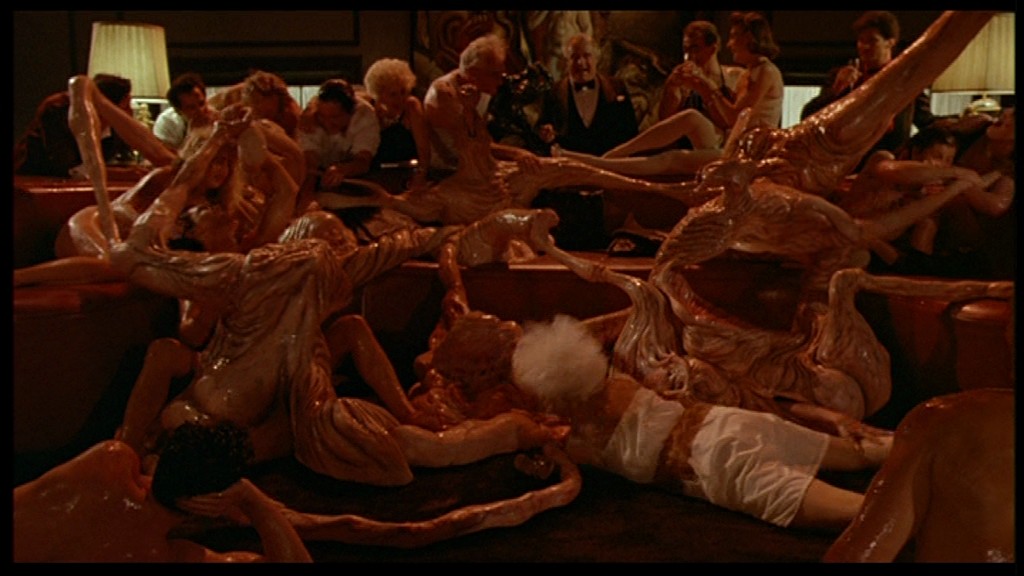 It’s a little difficult to explain this scene without providing a bit of context. Brian Yuzna’s 1989 film is a satire on people and how they function as a whole. The moment discussed happens a lot later into the movie, and is a gory party held by the people in a town where they literally “eat” their fellow humans who act or appear a different way (or, you know, dare to question the system). The scene is extremely bloody and well populated, but does appear to be a little cartoon-ish, citing a possibility that the beings performing the cannibalistic actions might not even be humans. It’s an awfully good, dirty little scene, all covered in blood and tastelessness, as people meld together and finish each other off (and sweat rather weirdly, too). 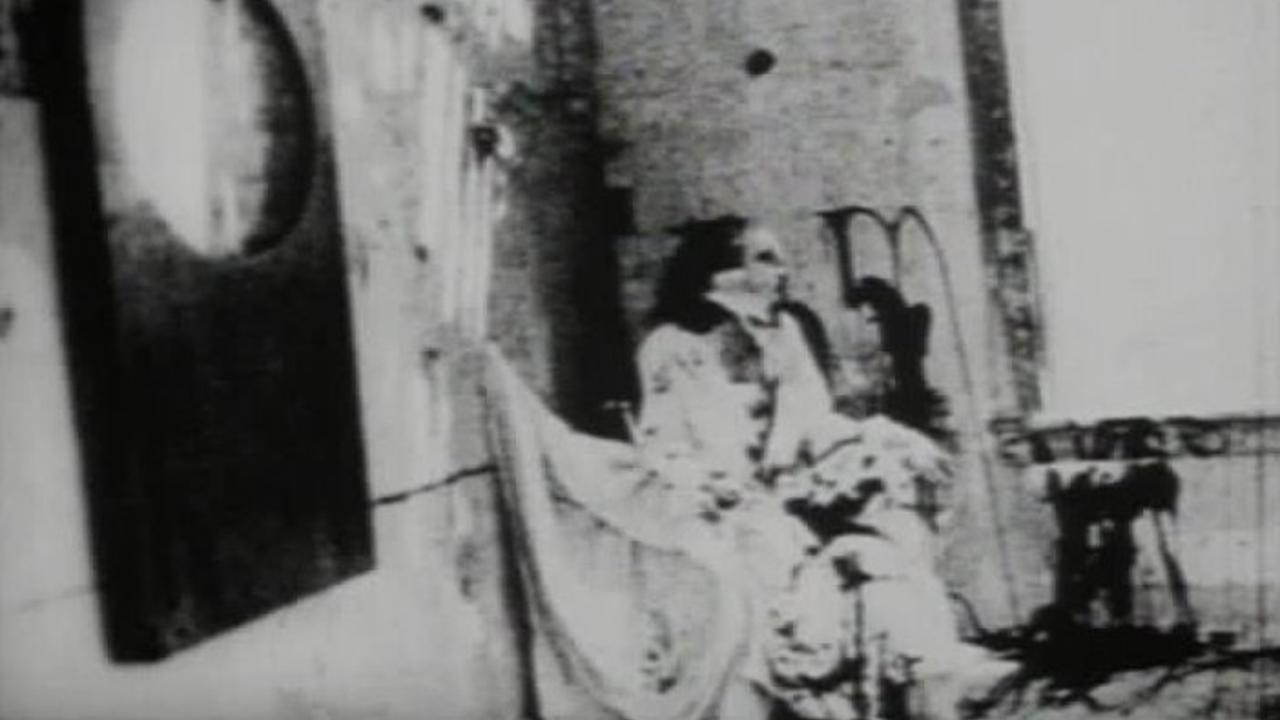 Begotten is one of the most uncomfortable experiences I’ve had at the cinema, and that I think is what makes it great. The film narrates the story of Genesis in its own interpretation, using a silent, black and white, grainy portrayal of Biblical characters, having re-imagined them in odd, surreal appearances. The scene referred to here happens early on in the film, where God is shown to be a robed, bleeding man, who commits suicide by disemboweling Himself. It’s a nasty scene that has the disemboweling shown in a complete, uncut shot that is disturbing, to say the least. Due to the filmmaking style, the scene isn’t too clear to the viewer and there are no sounds heard, but that only gives the movie a more raw and authentic feel. 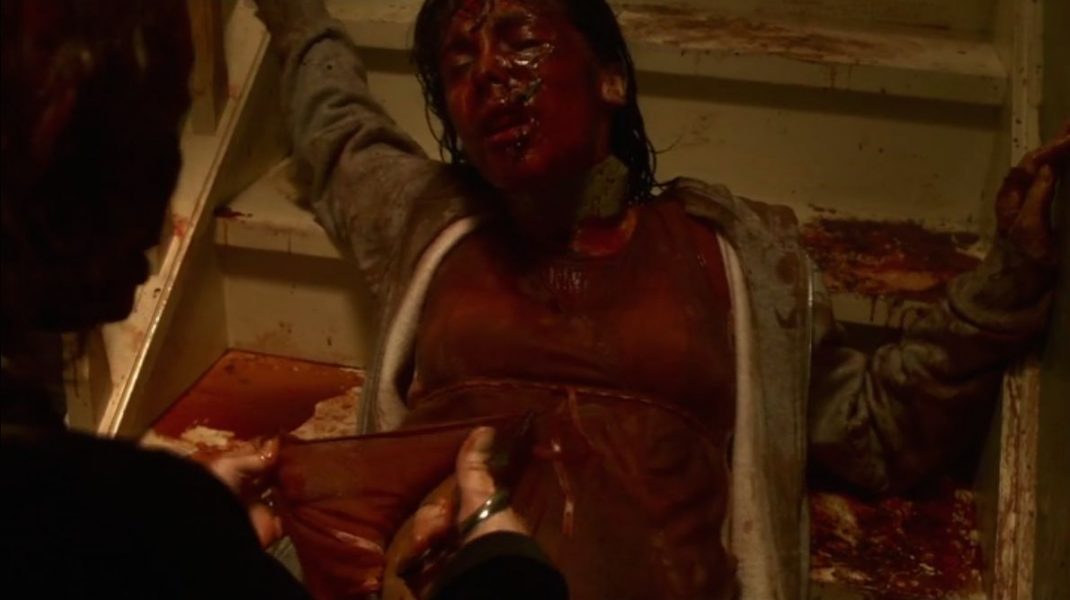 This scene is so harrowing I feel awful just trying to describe it. It follows two women who chase each other, one of whom is pregnant, with the other running behind her, both of them covered in blood. She catches up and holds the pregnant lady over in such a way that she’s unable to move. Then, taking a pair of scissors, she begins to cut her up. The scene is absolutely ghastly and extremely hard to watch. Though blood quantity might be comparatively less here, I just had to include this scene because of how effective the moment is. Like I said though, it’s difficult to sit through, maybe more than any other pick on this list, so be warned.

Gasper Noe’s magnum opus Irreversible features some of the most gut-wrenching scenes ever put to celluloid. Out of these is a bit from early on that takes place in a gay club, and it’s as violent as you can imagine. The scene is quite atmospheric, with the camera and sound working towards creating a claustrophobic environment, with the red tint just adding to the uncomfortable aura. Starting off with some vigorous pushing and punching, the scene gets a lot bloodier when a man takes a fire extinguisher and repeatedly strikes another in the face with it. Each hit shows the victim’s face deforming, becoming almost rubbery, as blood starts to gush out. It’s really sick, but works very well in the movie. 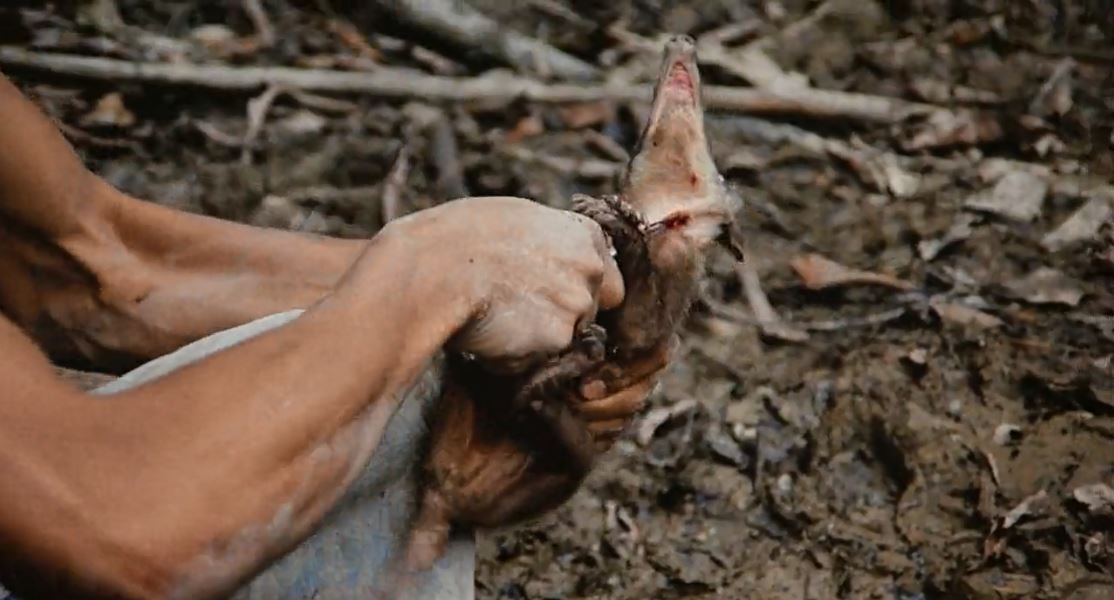 One of the most controversial scenes in cinema history appears in a film that’s judged likewise. It involves the killing of a rat in order to consume it for food. The only problem here is that the rat used was, in fact, real, and its death was shown in its entirety for the film. With that knowledge in mind, the moment is pretty unbearable, and as a writer, I find it difficult to describe. There is a lot of blood and a lot of squealing as the rat is cut open with a sharp knife. The scene and other bits of the movie led to it being highly divisive among movie fans, and the film was subjected in court for its attempts at authenticity. Cannibal Holocaust has several other moments that I’d consider indigestible, but this is by far the worst of them. 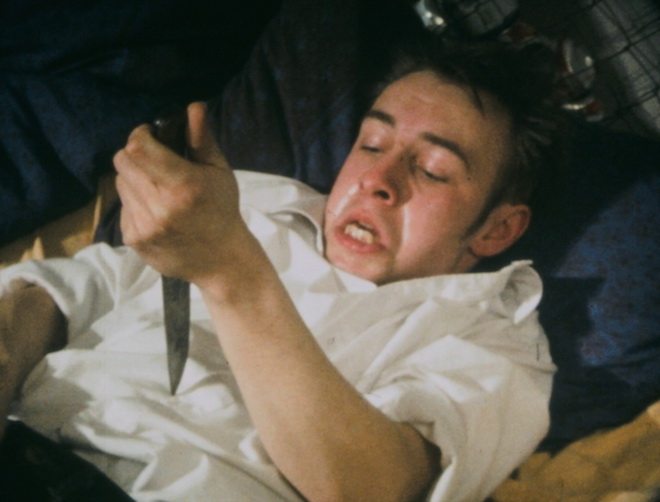 Nekromantik is a hard watch as it is, but this particular scene takes it to a whole ‘nother level. It’s a strange suicide scene where a man ends his life by thrusting a knife into his gut, while leaving his penis out in the open. As he bleeds, he starts to masturbate, and soon gushes blood out from his penis as well, turning the room he is in into a red-soaked mess. The scene is extremely painful to watch, but what makes it worse is that it’s intercut with another scene showing the killing of a rabbit, played in reverse. Though I find the film as a whole to be ineffective and a little bit cheesy, this one bit is really sad and harsh to view. I wouldn’t say the special effects here are done exceptionally well, but for some reason, it all works. 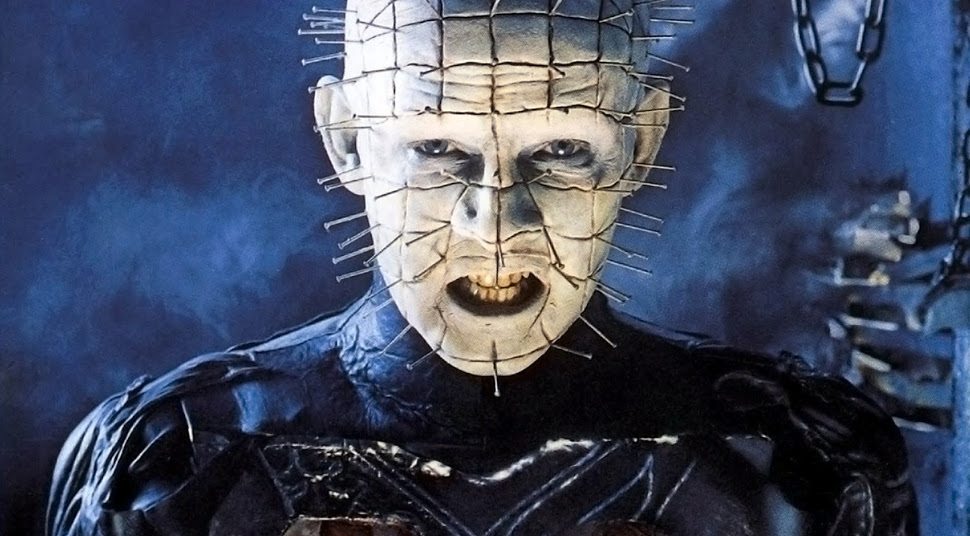 This one’s a little nuts. A character is in a tight spot, with metal hooks clasped onto various parts of his entire body, pulled by chains from off-screen distances. It’s a bit too rubbery to be any realistic for me, but when the blood comes pouring, it looks strangely realistic. The Hellraiser films are known for their violence anyways. The man is pulled apart by those chains so very hard that in the end, he can’t handle the pressure and just bursts, with blood splattering everywhere. While it’s happening to him, the scene has been well directed enough to communicate the pain to us. I mean, I definitely wouldn’t want to be hooked the way he was, and I don’t think anyone else would enjoy the same, especially after having seen the film. 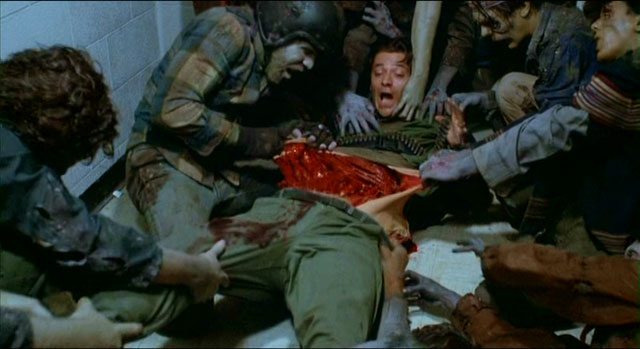 George A. Romero helming any film (this one as a screenwriter) is a direct message that it’ll feature some top quality gore. Known for his legendary zombie movies, Day of the Dead follows suite but has a scene that I consider to be gorier than anything I’ve seen in any of his other films. It’s when all the zombies get together and tear apart a man in his entirety, which is pretty intense and puke-inducing, especially since internal body parts covered in this slimy coating of blood are pulled out into the exterior as the man loses his torso to a bunch of dead-alivers. It isn’t a hard watch, but I’d rather watch something else, if I were to be honest.