When Will Grace and Frankie Return on Netflix? 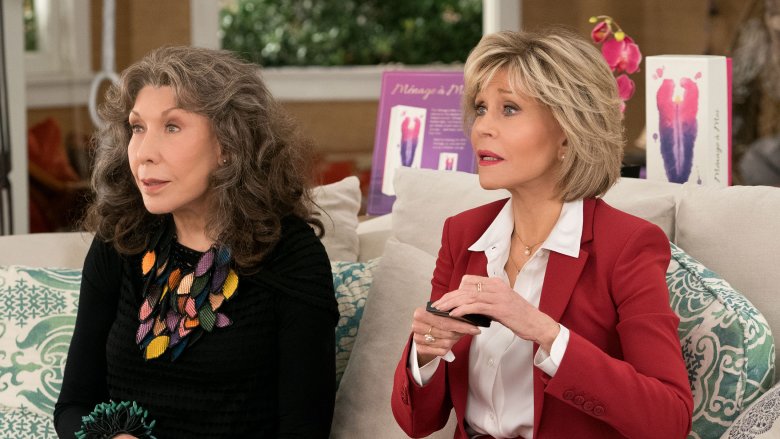 ‘Grace and Frankie’, the beloved Netflix original, is about two friends — the titular protagonists who gel together after they learn about their husbands’ mutual, extramarital affair. Created by Marta Kauffman and Howard J. Morris, the series has managed to stay among the longest-running titles on the streamer.

Branded as “heartfelt and hilarious”, season 5, which premiered in January 2019, opened to rave reviews, with the critical consensus on Rotten Tomatoes stating: “Five seasons in, Grace & Frankie remain blissfully at the top of their game, thanks to Jane Fonda and Lily Tomlin’s undeniable bond.” In fact, across the years, it has received multiple award nominations, including five Emmys and one Golden Globe.

Season 6, which landed in January 2020, managed to garner warm responses once again. Hence, it came as no surprise when we learned that the show has been renewed for yet another season. The only question is: when will ‘Grace and Frankie’ season 7 premiere on Netflix? Read on to know.

Grace and Frankie Cast: Who’s in it?

Season 7 has already been confirmed to see the lead cast reprising their original roles. There will be some surprise guest appearances as well, but the details are not out yet. We will update this section as and when we learn more.

Grace and Frankie Plot: What’s it about?

‘Grace and Frankie’ is kind of a comfort-inducing comedy-drama that is a staple in almost every global household. And why not? Showrunner, Marta Kauffman, is also the showrunner for ‘Friends‘. The seasons, since the show’s launch, have followed a similar format — the duo meets new friends and new relatives and goes on fresh ventures but always manages to come back to their beach house. However, season 6 deviates a bit from this routine and brings in more permanent changes.

The most-notable transformation is that now Grace is married to business tycoon Nick. She moves in to be with her husband and leaves the beach house. Grace and Frankie are also working hard to launch their latest product Rise Up, which is kind of a hydraulic toilet that enables senior citizens to use the toilet with minimal effort.

On the other hand, Sol gets a health scare and he is still in the midst of his ongoing financial battles with Robert. Brianna is having problems with Barry and Bud is navigating his own married life. Coyote dates Bud’s ex and Mallory shows more concentration for Say Grace.

The season’s finale ends on a major cliffhanger. Nick gets arrested by the FBI for fraud and Grace and Frankie stumble upon a pile of cash that would help solve their Rise Up problems. Grace goes back to the beach house and when the two return from the seaside, they are in for another shock — Sol and Robert have decided to join them as roomies since the Rise Up, given to them by Grace and Frankie, explodes!

Season 7 will, of course, tackle these storylines but it also promises to be a lot more different from the rest of the show. Showrunner Marta hinted about the storyline of the upcoming season, saying: “In terms of season 7, I can’t say too much, but we’re going to be dealing with Robert, Sol, Grace, and Frankie in a way in that we haven’t seen before.”

When is Grace and Frankie Season 7 Release Date?

Grace and Frankie season 6 premiered on January 15, 2020, on Netflix, in all its entirety of 13 episodes.

Even before season 6 aired, Netflix had already renewed the show for a seventh season. It will consist of 16 episodes. And since the last three seasons have followed a fairly regular schedule of dropping each year in January, we expect ‘Grace and Frankie’ Season 7 to premiere sometime in January 2021.

The seventh installment will be the last part of the series. Stars Fonda and Tomlin confirmed it in a statement, where they said: “We are both delighted and heartbroken that Grace and Frankie will be back for its seventh, though the final, season. We’re so grateful that our show has been able to deal with issues that have really connected to our grand generation. And their kids, and amazingly their kids as well.”

Once season 7 lands, we are sure that it will leave behind a legacy, which will be remembered for years to come.

While we wait for an update on the release date of season 7, you can watch the season 6 trailer below: