‘Grave of the Fireflies’: A Powerful Saga of War and Survival 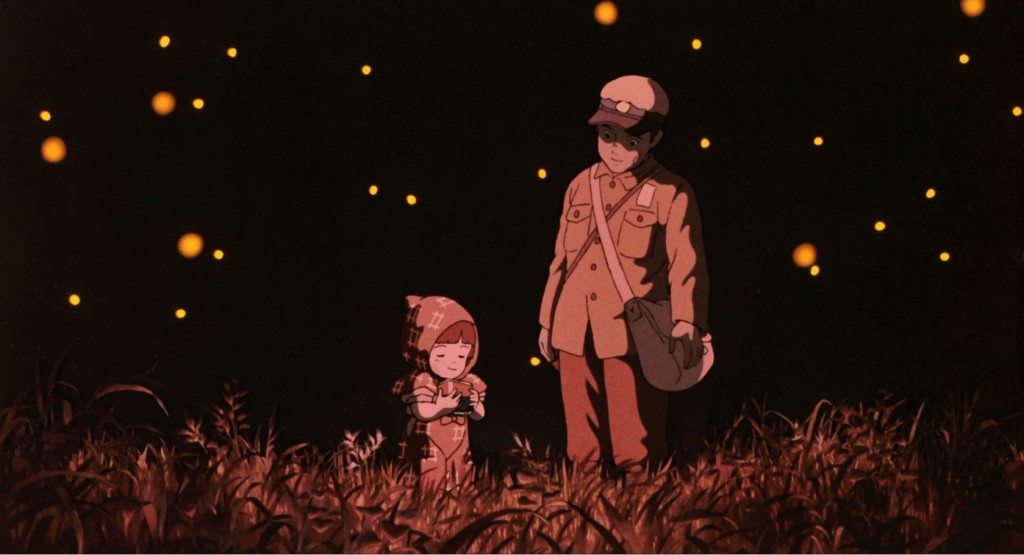 Many cinema scholars contend that unobtrusive and representative reality can’t be depicted through the usage of animation. Thus, animated movies have seldom ventured into overtly serious territories. While the scholars might have their own set of reasons to justify such a retrograde and boorish belief system, Isao Takahata’s ‘Grave of the Fireflies’ (1988) is so potent a human document that the viewers are forced to move beyond the exaggerated and often unrealistic animated imagery and descend into a decidedly surreal word, which is at times is more real and starker than reality.

The film starts on a uniquely depressing note. A boy is shown to be dying of starvation at the Sannomiya Railway Station in Japan. When the boy’s possessions are scanned, a candy tin is found. When the tin is thrown into a nearby field, the spirit of the boy’s younger sister emanates from it and is joined by the spirit of her brother. Both the spirits are shown to be swarmed by a bevy of fireflies and the boy’s spirit recounts their tale through flashbacks. This beginning in itself is reason enough for someone to give the film a serious watch.

‘Grave of the Fireflies’ could actually be categorized as a strong statement against war and its dehumanizing effects. A story that coincides with the ending of the Second World War, the movie is a classic representation of survival failure, a failure that could be easily ascribed to the degradation of humanity and its obvious implications. The film celebrates silence and serenity as much as commotion and struggle. As a viewer, you learn to be patient and wait for the story to unwind in its own way. While we all grew up watching cartoons and at times animated movies that were a little more serious, those audio-visual ventures created sorrow without looking deeply into tragedy as the eventual fate of sorrow. While it might sound a little too flashy, ‘Grave of the Fireflies’ essentially reshapes our way of looking at animated films and perhaps the very concept of war.

While the teenage boy named Seita and his five-year-old sister Setsuko make a distinct attempt at survival by moving in with their relatives after the death of their mother, wartime emergencies and the resultant clamour for food make the relatives harsh. This is indicative of the subtle undermining of the concept of humanity itself. The siblings then desert the relatives and begin dwelling at an abandoned bomb shelter where they release fireflies to get light. Although animated, the scenes perfectly capture the ambience and establish the dire nature of the place. The movie is not so much about survival as it is about analyzing if at all the concept of survival is worth the deal. When the fireflies die the next day, Setsuko is perturbed by the basic existential enigma – death as it is and the reasons for death. While we do get moved by the little girl’s questions, it doesn’t take much time for the focus to get shifted to the primordial issues being dealt through the film – war and humanity. While Takahata does impart enough relevance to actions, the consequences constitute the movie’s crux. While live-action films could be more efficient at recreating a given time and space, ‘Grave of the Fireflies’ don’t fail either in creating a dreaded environment, an environment beset with the frailties of the human civilization. For people who get swayed by Steven Spielberg’s ‘Schindler’s List’ (1993) and its accurate portrayal of the Second World War, it could be a poignant exercise to sift through the multiple layers of Takahata’s masterpiece.

Notwithstanding the fact that it is intellectually fashionable to dismiss the authenticity of animated movies, ‘Grave of the Fireflies’ efficiently achieves its objective, that of weaving the horrors of war. It could actually be deduced that the true reason for the siblings’ death is not starvation but their reluctance to survive in a crude world, distinctly distinguishable through human sufferings. While reminiscing about the film, one invariably remembers a scene where Setsuko is shown to prepare imaginary delicacies for her brother using mud. The starkness of the scene is simply overbearing. Thus, it comes as no surprise when very few people revisit the movie even after immensely appreciating its intrinsic beauty as undiluted reality is often hard to ingest and even harder to digest.

Truth be told, the fact that ‘Grave of the Fireflies’ is a Japanese movie makes it less flashy. Thus, one needs to go beyond the usual cultural stereotypes to start appreciating its unambiguously universal nature. This is not to say that the film doesn’t have any cultural lineage. It has distinct cinematic elements that establish its origin beyond any doubt, its animated form seemingly not acting as an impediment.

It is pertinent to mention here that the movie is based on a short story of the same name by Akiyuki Nosaka. However, the film goes much beyond the semi-autobiographical tale that is presented through the book. The animation was executed by the renowned Studio Ghibli, an organization that has been instrumental in making some of the finest animated movies of all time. While critics from all across the world have described the movie as an anti-war one, the director himself differed with such an interpretation. The music by Michio Mamiya perfectly complements the film’s central diegesis and at times enhances the ambient theme tone. The Japanese anime movies are known for their unique style of cinematography and Nobuo Koyama does absolute justice to the concerned adage.

As lovers of cinema as an art form, ‘Grave of the Fireflies’ is a strong emotional detour, something that forces us to reconsider our existence – pointless as it sometimes is! However, there is no denying that we come out wiser after watching the movie each time. A peculiar sense of void engulfs us, the void emanating from a dubious feeling of existentialism and nihilism. All genres of art have repeatedly pointed towards the futility of war. However, war films have been able to impact the collective consciousness of the human race in the most profound way and ‘Grave of the Fireflies’ is arguably the starkest rejoinder to that.