Is Gravity Falls Getting a Season 3? 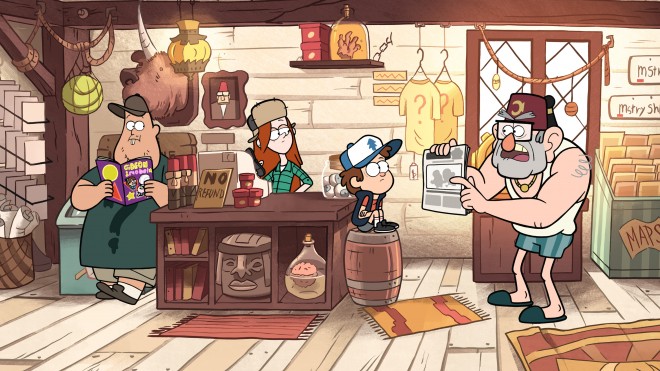 What do you get when you combine the family elements of ‘Phineas and Ferb’, the oddball characters of ‘Adventure Time’, the exploding conspiracies of ‘X-Files’, and the surreal backdrops of ‘Twin Peaks’ into a comprehensive animated tale? One of the smartest, nerdiest, and wittiest cartoons ever! Disney Channel’s ‘Gravity Falls’, created by Alex Hirsch, is about two siblings who head to the mysterious town of Gravity Falls in Oregon to spend their summer vacations with their great uncle Stan. What ensues after their arrival is an unbreakable chain of puzzles and paranormal mysteries that the kids attempt to crack as they aid Stan in running the Mystery Shack.

The show had two very successful seasons. Now, many fans are wondering if there will ever be a ‘Gravity Falls’ season 3. Here’s everything we know.

Gravity Falls Cast: Who is in it?

Jason Ritter from ‘Parenthood‘ fame is the voiceover artist for Dipper Pines. Dipper is Mabel’s elder twin, who always carries a journal named ‘3’ that he found in the forest. He uses it to solve the multiple mysteries in Gravity Falls. Having an active imagination, Dipper does not appreciate dull moments and gets restless when there’s no riddle to crack. His knack for being able to detect even the slightest details makes him the perfect person to save the small town from impending dangers. He has an obsession toward making lists and has a soft spot for Wendy.

Mabel Pines (voiced by Kristen Schaal, who voices Sarah Lynn on ‘BoJack Horseman‘) is Dipper’s younger twin sister. A quirky, lively, and positive girl, she is extremely talented in art, especially in the craft of knitting bright sweaters. Outgoing and forever curious, Mabel teams up with Dipper to solve mysteries. She is an avid reader of preteen novels and has an obsession with vampires, especially when it comes to romance.

Grunkle Stan (Alex Hirsch) is Dipper and Mabel’s great uncle. Self-centered, blunt, and aggressive, he owns and runs a tourist trap called Mystery Shack, branded as “the world’s most bizarre museum”. He inflates the cost of the knick-knacks in his shack and sells them to unsuspecting tourists at unreasonably high prices. Stan’s thirst for money often leads him to adopt illegal means to earn more cash. However, in spite of all these traits, he loves the twins unconditionally.

Jesus Alzamirano “Soos” Ramirez (also voiced by Alex Hirsch) is a helper at the Mystery Shack. Clumsy, a tad not-so-bright, 22-year-old Hispanic guy, Soos is an expert when it comes to engineering, DJ-ing, and pinball. He is good friends with the twins and helps them out whenever they need another hand. Wendy Corduroy (Linda Cardellini) is a young teen who works part-time at the Mystery Shack. Dipper has a crush on Wendy although she has made it clear that a relationship is not possible between the two. A tough lumberjack with a good amount of physical strength, she comes in handy when the twins face dangerous situations.

Gravity Falls Plot: What is it about?

‘Gravity Falls’ introduces us to the 12-year-old twins, Dipper and Mabel, who head out from their home in Piedmont, California, to spend their summer vacation in the fictional town of Gravity Falls, Roadkill County, Oregon. They stay with their great uncle, Stan Pines, the owner of a tourist trap called the Mystery Shack. This small, quaint town might seem peaceful and incident-free but it holds several mysteries. After Dipper discovers a weird journal in the woods, he teams up with Mabel, Wendy, and Soos to unravel the several puzzles in the neighborhood.

‘Gravity Falls’ is one of Disney’s fan-favorite shows for multiple reasons. The animated series features a stellar cast, is visually spectacular, and has one of the smartest scripts. It does justice when it comes to continuing Disney’s epic legacy, that comprises legendary titles, including ‘The Gummi Bears’, ‘Darkwing Duck’, and ‘Gargoyles’, to name a few. When we follow the saga of Dipper, Mabel, and Grunkle Stan, we cannot help but agree that it sticks to Disney’s record of attention to detail and seamless narration. With a 100% rating on Rotten Tomatoes, it is described as: “a warm humor and bright show for all ages.”

‘Gravity Falls’ season 2 premiered on Disney Channel on August 1, 2014. After spanning 20 episodes, it wrapped up on February 15, 2016, with an hour-long finale, ‘Weirdmageddon 3: Take Back the Falls’.

As far as new season is concerned, you should know that creator Alex Hirsch already announced in 2015 that the series would conclude with its second season. He said that he wanted the show to end with “a real conclusion for the characters”. Hirsch further added, he is open to continue telling the story through episode specials and graphic novels. And standing true to his words, Hirsch released a graphic novel named ‘Gravity Falls: Lost Legends’ on July 24, 2018.

You can check out the official trailer for season 2 of ‘Gravity Falls’ below. You can also head to their official website if you wish to catch up on all the previous episodes from the show.